The Problem with Rick Perry for President, 2016 Edition 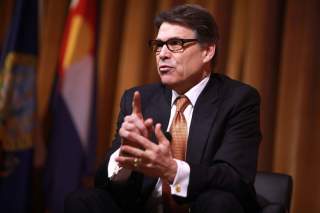 Texas Gov. Rick Perry had an eventful day Tuesday. He posed for a booking photo. He went for ice cream. And he probably wondered whether a 2016 presidential campaign can be salvaged after an indictment.

Make no mistake: Perry is hoping to run for president again. His schedule has included primary and caucus states, such as Iowa and New Hampshire. Washington, D.C. has also been on his travel itinerary, with a speech at the Heritage Foundation and a border security event hosted by National Review.

Perry will campaign heavily on his economic record in Texas, a national leader in job creation, business climate and growth. He will contrast Texas’ relative success with the continuing stagnation throughout much of the rest of the country, making the case for his own acumen and the success of conservative policies.

The retiring Texas governor faces two major obstacles. The first is the aforementioned indictment. Perry vetoed the funding of a “public integrity” office after its chief prosecutor was incarcerated for forty-five days and refused to resign. Perry’s detractors say the veto was a misuse of government funds in an attempt to “influence” a public official (in this case, to secure her resignation).

Even many liberals have been critical of the charges. Legal expert Jonathan Turley described the indictment as “short on the law and even shorter on the facts.” Ron Paul, one of Perry’s leading Republican critics, called it “pure politics” and “really a joke.”

If Perry is acquitted, the case will work to his benefit. He will be seen as the victim of what fellow Texas mug shot Republican Tom DeLay calls the “left’s criminalization of politics.” The Boston Globe already reports he plans to use the indictment to his advantage in New Hampshire. But a jury could always convict him, which would obviously be a serious problem.

The biggest impediment to Perry’s presidential aspirations, however, remains his ill-fated 2012 campaign. Perry briefly emerged as the biggest threat to Mitt Romney’s nomination. He was well funded, boasted a good organization and then, as now, had Texas’ economic performance to run on.

Unlike Romney, Perry was a red stater who could connect at an emotional level with the Christian right and he had never been pro-choice on abortion. And unlike the merry-go-round of conservative primary challengers who briefly rocketed to the top of the polls in 2011, on paper, he looked like a credible general-election candidate. He was the electable conservative in the race.

Perry’s organization seemed divided between Texans who were loyal to him, but lacked national campaign experience—they may have underestimated how different a presidential bid is from running for governor, even in a big state like Texas—and operatives with national experience, but little loyalty to the candidate. The latter group quickly began trashing Perry once the campaign started to implode.

The 2012 experience may have done long-term damage to Perry’s image as a capable national leader, much like Dan Quayle could never shake his reputation as a lightweight after a shaky rollout in 1988. He may have lost ground to other conservatives, such as fellow Texan Ted Cruz, Marco Rubio and Rand Paul, or other governors, like Scott Walker. If Mike Huckabee ran, he might have a firmer grasp on conservative evangelicals.

To have any realistic shot at winning the nomination, Perry would probably have to pull off some upset victories in the early states. Must-wins include Iowa (where he finished fifth in 2012) and South Carolina (his 2012 campaign didn’t make it that far). Otherwise, it would take the collapse of one or more top-tier candidates to give Perry a viable path to victory at the Republican National Convention in Cleveland.

Republicans have nominated past losers before. Ronald Reagan won the nomination on his second serious try, though it was technically his third campaign. It took Bob Dole three attempts to become the GOP presidential nominee, George H.W. Bush, John McCain and Mitt Romney two apiece.

Yet when Reagan, Bush, Dole, McCain and Romney were nominated, they could all make the case that they were the runner up in the previous round of competitive primaries. Perry wasn’t even close. And none of them were under indictment.

Rick Perry must solve some Texas-sized problems to win the Republican nomination, much less the presidency.