The Problem with 'the Best of Intentions' Foreign Policy 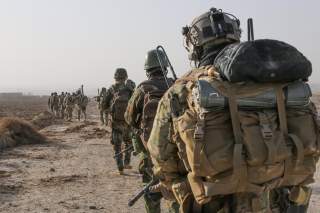 The nineteenth-century Germans focused so much on philosophy partly in order not to compete with the protean genius of Goethe, who had dominated all the other literary genres in Germany for so long. And so we have Hegel, Nietzsche and Schopenhauer defining, among other things, the concept of tragedy. But it is Georg Wilhelm Friedrich Hegel who concerns me here, because he formulated some concepts apt to our foreign policy debates regarding armed intervention, particularly in the Middle East.

Hegel notes that one example of a tragic situation is when a family duty is in conflict with a wider social or universal duty: a foreign policy parallel to this could be when the interests of state are in conflict with the wider interests of humanity—with both points of view more or less justified. Edith Hamilton, the mid-twentieth-century American classicist, interpreting Hegel, says “the only tragic subject is a spiritual subject in which each side has a claim on our sympathy.” Another earlier interpreter of Hegel, the English literary scholar A. C. Bradley, said that tragedy “appeals to the spirit” because “it is itself a conflict of the spirit.”

But while both sides in a conflict can have a claim on our sympathy, both sides cannot be right. Usually, one side is judged right and the other side wrong. Hegel, in his Philosophy of Right (1820), observes that when “figures whose ethical life is on the highest plane” come into conflict, “we are not elevated” by the destruction of one of the parties, but by the triumph of the truth which emerges. “This,” he says, is what “constitutes the true, purely ethical, interest of ancient tragedy.”

Therefore, among the many other facets and definitions of tragedy, one thing that tragedy can be about is the story of a person (or a group of people, for that matter), who, while right-thinking, acts wrongly. Such a person or group genuinely intends the best outcome, but ends up with the worst outcome.

Does this sound familiar?

The people I know who supported the Iraq War genuinely intended the human-rights situation in Iraq to be improved by the removal of Saddam Hussein, not made worse through war and chaos. The group of policymakers who supported the Libya campaign genuinely thought that by toppling the regime of Muammar el-Qaddafi a humanitarian catastrophe in Benghazi would be averted and the country as a whole would benefit. Instead, Libya collapsed into anarchy with many more thousands of casualties the consequence. The people who supported an early intervention to topple the regime of Bashar al-Assad, or at least limit the suffering in Syria, genuinely thought they were in both the moral and strategic right. And they might actually have been correct. Since there was no intervention in this case, the results of one remain an unknowable.

All this, by Hegel’s definition, is a kind of tragedy. In all three cases the results have been horrific. In all three cases, both sides have had at least some claim on our sympathies, however partial, even if we have disagreed with them. There were the interests of the state and its many limitations on one hand, and the interests of humanity on the other. Of course, the interests of humanity can in quite a few circumstances coincide with the interests of state. But it cannot do so all the time, or else we would be intervening everywhere, and that would not be sustainable. And yet just because you cannot intervene everywhere does not mean you cannot intervene, consistent with your interests, somewhere.

In ancient tragedy, as Hegel notes, the truth always emerges. What, then, is the truth about humanitarian intervention in the Muslim Middle East? The truth is that American power can do many things, but fixing complex and populous Muslim societies on the ground is not one of them: witness Iraq and Libya. But in the case of Syria, where a humanitarian and strategic nightmare has ensued without our intervention, it behooves us to treat each crisis individually, as sui generis. For intervening in one country might be the right thing to do, while it may be the wrong thing in other countries.

Indeed, this search for truth is consistent with the core principle of ancient tragedy. This is partly what made the Greeks great. In The Birth of Tragedy (1872), Friedrich Nietzsche intimates that the same civilization that invented tragedy also defeated the Persian Empire. Likewise, America’s own greatness requires the constant search for truth in war.

But this only takes us so far. The endings of Greek plays are devastating yet satisfying. There is nothing satisfying about Iraq, Libya, and Syria. Perhaps Greek tragedy, and the interpretations of it by Hegel and so many others, are themselves too easily consoling, given the horrors of the Industrial and post-Industrial ages. Precisely because these humanitarian monstrosities are periodic—and knowledge of them vivid thanks to communications technology—the debate over the proper role of American power continues and could even intensity. For state capacity is weakening in too many places, creating conditions for more nightmares.

Thus, we require anxious foresight—an early warning system, better intelligence gathering—to guard against disasters ahead. If we act early, the conflict between the interests of state and those of humanity can be lessened. That is, we must think tragically in order to avoid tragedy.

Robert D. Kaplan is the author of The Return of Marco Polo's World: War, Strategy, and American Interests in the Twenty-first Century, forthcoming in March. He is a senior fellow at The Center for a New American Security and a senior adviser at Eurasia Group.