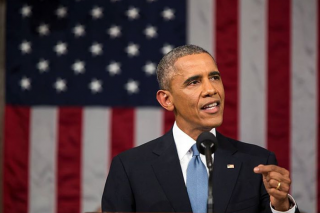 This speech made history. No State of the Union address in the modern era makes the case more that America stands as strong and resilient as ever.

Before the president’s pitch, there were arguments for jettisoning the State of the Union address altogether. Philip Bump at the Washington Post came right out and said it: “Not to start too pessimistically, but let’s be honest with one another. The pomp and scale that surrounds Washington is a skeleton of the past.” Bump’s just wrong.

The State of the Union address is as relevant as ever—just not the speech we heard last night.

Bump’s charge of irrelevance might carry some weight if President Obama’s address were to be judged solely on content. The president’s comments about America’s place in the world are a case in point.

Mr. Obama’s approach to foreign and defense policy remains famously predictable. The Obama Doctrine is ever long on promises to “solve our most fundamental foreign policy challenges” with “soft power” solutions. There was no serious expectation that he would stray far from that path in this year’s State of the Union Address. He didn’t.

Likewise, few were surprised the speech was “light” on foreign policy. After all, the administration just weathered one of the worst years of foreign-policy setbacks in recent memory. The list of failure is long. In an already too-wordy speech, it would have been unreasonable for the president to try to explain setbacks to U.S. interests and prestige in Central Europe, the Middle East, Asia, Africa and Latin America. In each arena, the U.S. security and freedom agenda has taken body blows.

Instead, Mr. Obama avoided any serious discussion of how he would cool the world’s hottest spots. Instead, he simply asserted that his policies were working fine, then quickly highlighted our nuclear negotiations with Iran and engagement with Cuba as “proof” that his foreign policy still has mojo. Harsh critics would call these initiatives little more than failure in waiting. Still, they haven’t failed…yet. So at least Mr. Obama could claim he is doing something on the international scene.

Despite the shortcomings of the speech itself, the “pomp and scale” of the event offer cause for optimism. When the three branches of government can assemble and respond civilly to an address that gives such short shrift to the president’s most serious responsibilities at time of increasing peril, there can be no other explanation other than that, while some might question his leadership, respect for the office of the president remains unshakable.

Not many countries could endure an endless string of foreign-policy reversals, serious complaints over abuse of executive power, apoplectic grumbling over the state of border security and spiteful bipartisan bickering—and then watch its leaders gather together in such a respectful manner.

“Pomp and scale” serve a useful purpose. The State of the Union address shows not just Americans, but the entire world, that America is still an exceptional nation—one that believes in the rule “by the people for the people.” Mobs and factions can never take our sovereignty away from us.

No one walked away from last night’s speech believing that raucous debate over how to keep the nation safe, free and prosperous would not resume today. The congressional and executive branches of government will labor away, often poking each other. Politicians will prep to win the next election. It’s not always pretty, but it makes for a stable power that allows for legitimate competition in the public political space, a polity that has the capacity to right itself no matter how wrong-headed the policy it might occasionally pursue might be.

Last night reminds that America retains the capacity to be America. Our friends should take comfort in that. And our enemies should curse their bad luck.

James Jay Carafano is a vice president of The Heritage Foundation, where he oversees research and policy development on issues of national security and foreign relations. You can follow him on Twitter: @JJCarafano.