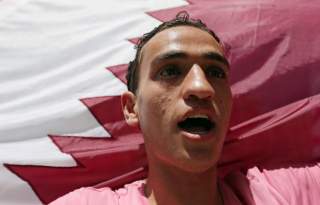 Until a month ago, most of us living in Doha—expats and locals alike—believed that Qatar’s leaders were doing a pretty good job of turning their country into a vibrant city at the center of the world.

We also believed that the presence of two of America’s largest and most strategically placed overseas military bases provided us with immunity from the turmoil of the wider region.

Then the unthinkable happened to this tiny kingdom, smaller than Connecticut in size and Nevada in population.

Saudi Arabia, the United Arab Emirates and Bahrain—three of Qatar’s closest economic and security partners—as well as several other Arab and Muslim states initiated a quasi-siege by land, sea and air.

That has made the situation very precarious for those in Doha with family ties and business interests in the boycotting countries. In some cases, students and workers had to dash home before airspace closed and flights ground to a halt.

For the rest of us, life remains normal enough. No shots have been fired, and there is plenty of food in the shops, despite early panic buying. But the whole affair has cast a giant shadow over Doha, just as it hits peak construction for the 2022 FIFA soccer World Cup.

Qatar and its neighbors have engaged in plenty of squabbles and political stand-offs in the past.

In the early 2000s they fell out over Al Jazeera, the Qatari news network that reinvented news reporting in the Arab world. They clashed again during the Arab Spring, when Qatar backed the revolution in Egypt and the rise of the Muslim Brotherhood. This tension culminated in 2014, when Saudi, the UAE and Bahrain briefly broke off diplomatic relations with Qatar in protest over Doha’s ongoing support for the Brotherhood. All of this exposed a Qatari strategic and ideological vision at odds with that of its local partners.That said, nobody expected things to turn out the way they have.

Government officials are bewildered. “Do they not know they are destabilizing the region?” is a question I’ve heard them ask repeatedly as they scramble to deal with the fallout. These figures are no strangers to regional power plays. But they just can’t understand why their Gulf allies are acting so recklessly now. They presumed that building a safe and stable environment in the region took precedence over any foreign-policy differences or personal ambitions that might exist.

Qatar’s tiny citizen population only accounts for 12 percent of the total 2.5 million inhabitants. For the first time ever, their country’s legitimacy and history, as well as its foreign policy, has been targeted directly. This personal hostility has shaken them much more than the practical impact of the boycott and blockade. Since the start of the crisis, I have spoken with dozens of articulate young Qataris—the future leaders of the country. They have grown up in Qatar’s golden age. They don’t remember a time before their country had the highest per-capita income in the world or before it was a key player in the global energy, financial, investment and property markets. They are proud of Al Jazeera and that their country will become the first Arab or Muslim nation to host the World Cup. They are even prouder that Qatar is now an important regional and international actor with an independent foreign policy.

At first, they were mostly angry and defiant. “We are a strong country,” one local explained, “and nothing our neighbors do is going to change that.” As the crisis has continued, they feel more shocked than angry. Many feel betrayed by neighbors who share the same cultural traditions and religious beliefs, as well as extensive family and business ties. This has fostered solidarity among Qataris, but it has also resulted in a sort of “social trauma,” as one young local explained—one that will take a long time to overcome.

In a region where pride is prized above all else and trust is the most valued currency, many Qataris worry that both have been damaged beyond repair.

For the thousands of Western families preparing to travel home for the summer months, this crisis has been a stark reminder of the precariousness of living in such a volatile region. Many, especially those with young children, are spending more time than usual weighing up the pros and cons of expat life.

Others are making preparations in case they are unable to return at the end of the summer—shredding financial documents, packing items of sentimental value, saying extra-long goodbyes to friends.

As one veteran Doha resident, who has been in the region for decades, recently told me, “Airspace and borders may reopen, diplomats may come and go, but things will never be the same again.”

Rory Miller is a professor of government at Georgetown University in Qatar. His book, Desert Kingdoms to Global Powers: The Rise of the Arab Gulf, was published recently by Yale University Press.

Image: A Palestinian man holds a Qatari flag during a rally in support of Qatar, inside Qatari-funded construction project 'Hamad City', in the southern Gaza Strip June 9, 2017. REUTERS/Ibraheem Abu Mustafa​