The Qatar Crisis Is a Wake-Up Call 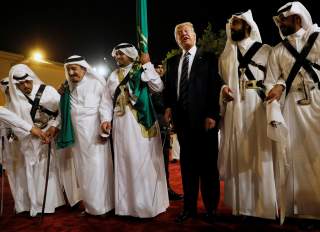 The Qatar crisis that began snowballing so shortly after President Trump returned from his first foreign trip has laid bare the folly of the administration’s unabashedly pro-Saudi policy. Using the pretext of Qatari support for terrorist and militant groups, Saudi Arabia and its Sunni allies cut off diplomatic ties and blockaded the small Gulf kingdom. While Trump initially indicated support for Saudi actions—more reflex than careful consideration, arguably—the full scope of the problem became clear later and may have been explained to him by his national-security staff. Trump’s attempt to form an anti-Iran coalition is evidently crumbling, and cracks are forming between U.S. allies. The situation, therefore, is important to understand, as Qatar hosts a huge presence of U.S. forces in the Middle East and is the launch site of many anti-ISIS air strikes.

This latest crisis has also divided countries in the region, including those with which the United States has important relationships. Turkey has called the blockade un-Islamic, all the more so because it is happening during the Islamic holy month of Ramadan, and is moving troops and hardware to Qatar, where it has a base. Iran, taking advantage of the chaos, is sending shipments of food and drinks to Qatar.

The underlying issue behind the Saudi conflict with Qatar goes back to 1995, when Sheikh Hamad bin Khalifa al-Thani seized power from his father in a bloodless coup. The new young sheikh of Qatar pushed limited reforms and greatly increased Qatar’s oil production and influence. His son, the current emir, is continuing those policies. The Saudis and Emiratis, fearing palace coups in their own kingdoms, opposed him. The relationship eased with time, but never quite recovered, as Qatar has always punched above its weight, by supporting political and militant organizations like the Muslim Brotherhood and Hamas. That put it at the forefront of Middle East great game, a position it occupied when the Arab Spring erupted; Qatar put heavy resources behind Syrian rebels and others. The Egyptian government’s worst fears came true when the Muslim Brotherhood, backed by Qatar, was instrumental in filling the vacuum after the overthrow of Hosni Mubarak.

Egypt, Saudi Arabia and the United Arab Emirates would have opposed Qatari support for the groups that threatened their survival no matter what. The allegation that Qatar also tacitly supported Al Qaeda and ISIS, or looked the other way while prominent Qataris did so, gave them a pretext to push what they had already wanted to do.

On the heels of a grand American visit to Saudi Arabia, complete with sword dances and orb touching, Riyadh’s move against Qatar was well timed. Moreover, Saudi and Qatari relations had been deteriorating; Qatar refused to join Saudi Arabia’s proxy war against Iran in Yemen.

The baffling thing is that the White House has continued to stand so strongly behind the Saudis at a time when a more balanced approach is desperately needed. It defies any logic of realpolitik. On the one hand, the threat of Wahhabi jihadism echoes out of Riyadh towards New York, Manila, Manchester and even Tehran. Yet it is Iran that is regarded by the Trump administration—and, to a large degree, neoconservative Republicans before him—as public enemy number one, despite sharing common interests like tackling ISIS. Iran, the country with arguably the most secular population of the Persian Gulf states, and one of the more democratic states in that neighborhood, should be regarded as an ally against the scourge of ISIS. The logic of balancing also suggests backing the relatively weaker power of the region, in this case a Shiite Iran, as opposed to the stronger Sunni block. Meanwhile Saudi Arabia, by no means a paragon of human rights, also funds many of the same militant and terrorist groups that Qatar does and is a major driving force fueling the chaos in Syria.

In physics, if a planet is supposed to move in a predesignated orbit but doesn’t, it is assumed that something else, preferably a larger celestial body, is interfering and changing its course. Same too with a foreign policy that has not followed theories and made little sense for so long. What is preventing the United States from pursuing detente or allying with Iran? Is it the Saudi lobby having a disproportionate effect on American decisionmaking, which is under renewed scrutiny? Neoconservatives and the anti-Iran camp? As the scholar Max Abrahams constantly writes, the idea that Saudis are opposed to Qatar because Qatar supports Islamists is ridiculous and brings to mind idioms about pots and kettles and glass houses. The real reason is rivalry with Iran.

The Trump administration is posturing. This is a president who came to power, in large part, on the emotional appeal of “strength.” He revels in taking hard lines against America’s perceived enemies, and digesting and expressing foreign-policy positions with little nuance. Similar positions are taking place with regard to Cuba, as Trump is pushing back Obama’s opening reforms, and the Paris climate accord. If Iranian protesters and its supreme leader have shouted, “Death to America!” at anytime within the past few years, then it must remain an enemy of America. Moreover, because the Republican Party has broadly maintained an anti-Iran view for years, and because Trump lacks deep insight into policy, Trump has basically adopted a strong anti-Iran view along with other default Republican views from the media and from those friends and advisers he has long known and trusted.

But as the trends are changing, it doesn’t make sense to maintain the same policy any longer. If there were sane people heading Washington’s defense- and foreign-policy establishments, they would leave the Middle East to regional actors, stop supporting Saudi Arabia’s genocidal war in Yemen and proxy war in Syria, and focus more on making lives better for the thousands of people who voted for real change, those disillusioned by meaningless foreign interventionism. Instead, despite the misgivings of the public faces of the Trump administration, President Trump somehow got coerced by Saudi Arabia, and dove face first into this dispute, which might further destabilize the Gulf, and incite further proxy wars.

Mitchell Blatt is a journalist based in Seoul, South Korea. He has been published at the Washington Examiner, the Daily Caller, the Hill and the Federalist, among other outlets. He tweets at @MitchBlatt. Sumantra Maitra is a doctoral researcher at the University of Nottingham, UK. His research is in great power-politics and neorealism. You can find him on Twitter @MrMaitra.