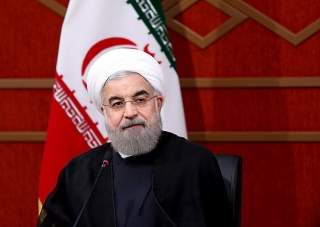 Iran watchers have puzzled to assess whether the Joint Comprehensive Plan of Action (JCPOA) that Iran and the international community agreed to on July 14, 2015, would lead to a fundamental reorientation in Iran’s foreign policy.

After taking power in 1979, the revolutionary regime adopted an international posture that combined the export of the Islamist revolution, a quest for regional hegemony, defiance of international norms and, most consequentially, the search for an atomic arsenal. Over the years, these policies turned Iran into a virtual pariah state—a process made unbearable when the United Nations imposed heavy sanctions to force the regime to roll back its nuclear project.

Form the onset of his presidency, Hassan Rouhani and his supporters considered the JCPOA to be a first step in a grander plan to normalize Iran’s international relations and reintegrate it into the community of nations. But opposition to normalization has not disappeared, because important elites have objected to the conditions that would make Iran a member in good standing of the international community.

Power struggle between the normalizers and their opponents (spoilers) would dictate the outcome of the normalization process. In fact, the political system in Iran, known as the negotiated political order, is especially susceptible to manipulation by putative spoilers. Unlike the standard hierarchical polity, Iran's negotiated political order is based on a series of complex arrangement among elites whose power base is anchored either in the state or parastatal domain. The president and the state bureaucracy compete with the parastatal Revolutionary Guards, the Basij—a volunteer paramilitary organization operating under the Revolutionary Guards with multifaceted roles—and large revolutionary foundations like Bonyad-e Mostazafan-e Enghelab-e Eslami, all outside the control of the state. Internal fragmentation of elites along personal or ideological lines adds to the confusion. In principle, the supreme leader is tasked with making binding decisions, but his power is far from absolute. Secretive, complex and intense maneuvering, intimidation, brinkmanship and even violence combine to generate a fluid and opaque decisionmaking process. This often results in contradictory messages emanating from Tehran.

In conceptualizing the project of normalization, the custodians have paid considerable attention to the rules of international behavior. At the same time, however, they well understand the limits imposed by the negotiated political order. By compromising between the two imperatives, the custodians have generated a plan of action that represents a facet of normalization that in principle is required for full reintegration into the international order, but that the custodians decided to prioritize, knowing their domestic limitations.

The normalizers managed to successfully implement the JCPOA on January 16, 2016, and, according to the IAEA, there have been no breaches in the conditions imposed. The result of the February 26, 2016, parliamentary election has given the normalizers considerable political cover. Reformists gained 135 seats in the new 290-member parliament, with ninety-two seats obtained by their conservative rivals. The fifty-two remaining seats went to independents, and five seats were garnered by religious minorities, a bloc that could hold the balance of power.

While the parliamentary configuration virtually precludes political damage, there is at least a theoretical possibility that spoilers may want to sabotage the agreement using clandestine methods. According to the IAEA Safeguards Division and the intelligence services of countries that monitor Iran, there has been no effort to fabricate uranium in a secret facility. Admittedly, the Safeguard Division and Western intelligence services would have a harder time tracking small-scale weaponization work.

Much as the JCOPA closed the path to enrichment, it left the spoilers with a window of opportunity to pursue the ballistic missile project, a concession that they demanded from the custodians. In its latest move, on September 21, 2016, a military parade in Tehran utilized missiles to threaten Israel. A banner on one of the missile-carrying trucks shown on state TV read: “If the Zionist regime makes a mistake, the Islamic Republic will turn Tel Aviv and Haifa to dust.” Because they well knew that they could not annihilate Tel Aviv and Haifa, the threats are apparently designed to embarrass the custodians.

As articulated by the custodians, managing terror and limited overt military actions are only second in importance to the project of normalization. From its earliest days, the regime followed the doctrine of exporting the revolution, which Ayatollah Khomeini had promulgated as early as the 1940s. Upon taking power, Khomeini reaffirmed the revolutionary intention of the new regime; he declared that “we should export our revolution to the whole Muslim world and to the whole world in the next step.”

The preamble of the new constitution of the Islamic Republic, which was promulgated on December 3, 1979, declared that “the way of Islamic ruling” is “based on the Islamic content of Iran’s revolution,” and that “the constitution provides a basis for continuing the revolution at home and abroad” and paves the way to set up the global Ummah. Paragraphs 152 to 155 mandate Iran to spread its particular brand of Islamism to other countries.

In May 5, 1979, the regime created the Revolutionary Guard, and three years later, the elite Quds Force that was tasked with operations abroad. Although the Quds Force was nominally under the command of the supreme leader, there was substantial overlap between the two organizations.

Both the Revolutionary Guards and the Quds Force have relied on terror to destabilize neighboring countries and operate farther afield. They have engaged directly or acted through proxies like Hezbollah in Lebanon, Hamas and Palestinian Islamic Jihad, the Houthis in Yemen, the Zakzaky group in Nigeria, some factions of the Taliban in Afghanistan and even Al Qaeda.

Operatives from the latter allegedly assisted with the bombing of the American base in Dhahran, Saudi Arabia in 1995. In Iraq, the Revolutionary Guards and the Quds Force have worked together with various Shia organizations, exacerbating the ethnic tensions that flared up since the American invasion in 2003. In Bahrain, they have collaborated with the Shia political movement Al-Wafa’a to plan attack against the government, a close ally of Saudi Arabia. The Revolutionary Guards and the Quds Force emerged as major players in the civil war in Syria where, assisted by Hezbollah fighters, they have been assisting forces loyal to Bashar al-Assad, Iran’s main ally in the region.

The terror operations of the Revolutionary Guards and the Quds Force landed Iran on top of the list of state sponsors of terror in the United States and in the European Union. Featured on the State Department list since 1984, the 2016 report states that “Iran remained the foremost state sponsor of terrorism in 2015, providing a range of support, including financial, training, and equipment, to groups around the world.”

The United States has designated Iran as a state sponsor of terror since 1984 and has sanctioned the Revolutionary Guards and the Quds Forces, and individuals and companies affiliated with them, as a Foreign Terrorist Organization. By one account, Iran came under some forty different sanctions for its support of terror groups in the Middle East and beyond.

Complicating the plans of the custodians is the policy of provocations in the waters of the Persian Gulf instituted by the naval branch of the Revolutionary Guards, the Niruye Daryai Sepah-e Iran (NEDSA)—the Sepah Navy Special Force, which is under the command of Rear Admiral Ali Fadavi. Since July 2015, NEDSA has been involved in eight incidents, most of which were against American vessels patrolling the Gulf. In January 2016, NESDA units seized two American riverine boats with ten personnel aboard, who were held overnight. More typically, however, the speedboats approach American vessels at high speed before turning around.

Recalling that the negotiated political order grants the Rouhani administration little influence over the Revolutionary Guards, harassment of American vessels is an effective way to tarnish the normalization project. Nor entirely surprising, Ayatollah Khamenei, who accepted the nuclear deal under economic duress, seemed to have blessed the NEDSA initiative. Just months after the deal was signed, on October 7, 2015, he praised the Revolutionary Guards’ naval units for their “vigilance” in the Persian Gulf. The recent encounters have brought more praise from the supreme leader and the media outlets that support him. As long as naval harassment is kept within certain limits, it is not expected to destroy the custodians’ goals. However, analysts have commented that such a policy could get out of control and trigger a major conflict in the Gulf.

Iran’s increasingly fraught relations with Saudi Arabia have similar potential for escalation. Mindful of Saudi Arabia’s importance, Rouhani and Ayatollah Rafsanjani, a key figure in the custodian coalition, initiated steps to normalize the relation with the kingdom. When Riyadh, determined to clamp down on the persistent Shia protests in its eastern province, which were allegedly driven by the Revolutionary Guards, executed the prominent Shia cleric Sheikh Nimr al-Nimr on January 2, 2016, on charges of terrorism and conspiring with Iran, the Rouhani government cautioned restrain.

But a crowd, organized by Hassan Kordmihan, on orders from Hojatoleslam Alireza Panahian, a member of the hard-line Haqqani School network of Ayatollah Mohammad-Taqi Mesbah Yazdi, stormed the Saudi embassy in Tehran, prompting the Saudis to terminate relations with the regime. Rafsanjani’s subsequent efforts to calm the situation did not bear fruit either, not least because of Khamenei’s virulent anti-Saudi rhetoric. In his September 5, 2016, message for the annual Hajj pilgrimage, Khamenei was particularly offensive, calling on Muslim countries to recognize the true nature of the Saudi rulers who are “criminals, and servants of the American Satan and the Zionists.”

Like an unexpected naval escalation, a terror-driven provocation against Saudi Arabia can quickly get out of control, undermining the custodians credibility. Since there have been reports that, under the recently installed King Salman and his son, the defense minister, Saudi Arabia has created its own counterterror forces, the probability of a major skirmish has gone up.

It is clear that the process of normalization and return to the community of nations is intimately bound up with the custodians’ political future. Unlike a state treaty, which is binding, the JCPOA is a controversial deal that depends on the political health of Rouhani and other custodians. Hard-core spoilers have made clear that they would try to sabotage it in whatever ways. The outcome of the 2016 parliamentary election indicates that the custodians have an upper hand, but next year’s presidential election is crucial. Should Rouhani lose the ballot, normalization would be thwarted, but the JCPOA is not likely to be abandoned, because most spoilers do not want to see “snap back” sanctions return.

Still, spoilers can either utilize terror or benefit from an accidental escalation of terror or limited military action spearheaded by the Revolutionary Guard or its naval unit. The latter scenario is particularly troublesome, because it is difficult to control the dynamics of terror-driven encounters. A catastrophic terror attack against Saudi Arabia, for instance, or a blowup in the waters of the Gulf, has the potential to undermine the credibility of the project of normalization.

Farhad Rezaei is a research fellow at Middle East Institute, Sakarya University, Turkey. He is the author of the forthcoming Iran’s Nuclear Program: A Study in Nuclear Proliferation and Rollback (New York: Palgrave Macmillan, 2016).