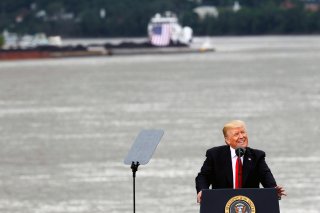 In October 2016, candidate Trump pledged that he would work with Congress in the first hundred days of his administration to spur $1 trillion in infrastructure investment months late. With at least one so-called “Infrastructure Week” derailed by the president’s tweets and turmoil, the White House finally unveiled its infrastructure plan. Like so much of the Trump presidency, the reality has failed to live up the hype: it’s a proposal that has turned out to be uninspiring.

After Trump’s election, infrastructure was supposed to be an issue for Republicans and Democrats to unite around. With little else on the table for bipartisan consensus—and with a self-proclaimed “builder” in the White House—it was only natural to think that both parties could get behind a cause that Democratic presidents and members of Congress have long touted. The plan released by the White House, however, couldn’t be more polarizing.

The American Society of Civil Engineers’ most recent report card provided insight into the sorry state of our infrastructure: schools earned a “D+,” roads a “D,” and transit a “D-,” among other depressing grades. Getting our overall infrastructure up to just a “B” level would require an investment of at least $2 trillion over the next ten years. Even with these facts on the table, Trump’s proposal features not one cent of new money for infrastructure; instead, it redirects $200 billion in existing federal resources, with a vague promise that these funds will magically multiply into $1.5 trillion in infrastructure investment. Public-private partnerships—another centerpiece of the Trump plan—needlessly explode the cost of projects and represent little more than a boon to Wall Street investors.

Meanwhile, the White House’s fiscal year 2019 budget, released the same day as the infrastructure plan, slashes $281 billion from a variety of critical accounts, including the Highway Trust Fund, which funds thousands of highway and public transportation projects each year; Amtrak; the Transportation Investment Generating Economic Recovery (TIGER) program; New Starts; and the U.S. Army Corps of Engineers. So much for “jobs, jobs, jobs”—that’s equivalent to $1.40 in cuts for every $1.00 in proposed expenditure in infrastructure, a figure that represents a net cut to employment and construction. It’s a damning indictment of the current administration’s priorities that it fought to enact $1.5 trillion in deficit-busting tax cuts for the richest Americans and wealthy corporations mere weeks ago, but can’t be bothered to offer a single penny toward rebuilding our public transit, highways and bridges.

Perhaps the most disturbing aspect of Trump’s infrastructure proposal, however, is its naked giveaway to wealthy project developers. To be sure: “streamlining” and “speeding up” project review is well-worn conservative code for undermining the country’s bedrock environmental laws, including the Clean Air Act, the Clean Water Act, and the National Environmental Policy Act (NEPA.) But Americans reject the false choice between rebuilding our roads and bridges and protecting the air we breathe and the water we drink. Polling by the Center for American Progress and Defenders of Wildlife reveals that 94 percent of voters say we can build and modernize America’s infrastructure while also maintaining protections for air, water, wildlife, and natural places.

These laws not only protect our environment, but aim to safeguard the civil rights of communities impacted by construction. In 2016, then-Secretary of Transportation Anthony Foxx delivered striking remarks that reflected on how much of U.S. infrastructure—including the famed Interstate Highway System—was built without regard to communities of color or low-income communities. In Charlotte, North Carolina—Secretary Foxx’s hometown—two-thirds of families displaced by the construction of the highway system were low-income; in Miami, the building of Interstate 95 ran directly through the center of the predominantly black community of Overtown. In rural Des Moines, Iowa, I-35 cut through “dozens of farms” and separated farmers from their land. NEPA was enacted, in part, as a response to these egregious acts; today, it empowers individuals and communities to weigh in and comment on major proposed projects, including whether these projects would have adverse social, economic, health, or cultural effects on low-income individuals or communities of color. Trump’s plan, however, eviscerates NEPA—opening the door once more to projects that not only put our environment at risk, but disenfranchise those communities whose needs and wishes too often go unheard in our political system.

Trump’s infrastructure plan, while long-delayed, reflects absolutely none of the thoughtfulness and bipartisan compromise needed for such a proposal to pass Congress. There’s no doubt that the President dreams of once again holding a golden shovel over hundreds of American infrastructure projects, but the plan released by his administration suspends that fantasy, and instead represents a step backward when it comes to rebuilding our most vital assets.

Allison Preiss is the managing director of communications at the Center for American Progress.