The Real Danger of Sending U.S. Arms to Ukraine 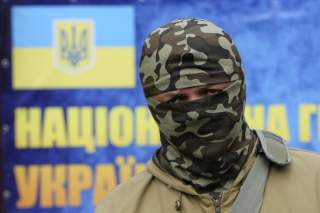 In 2015, after spending several months in the frontline zone I wrote that Ukraine desperately needs a “lousy peace” and not an arms race. Two years and several thousand deaths later, the idea of supplying Ukraine with U.S. arms has resurfaced.

As a humanitarian worker whose greatest desire is to see the intolerable misery of Ukrainian civilians come to an end, I grapple with these questions: Would American arms increase the price of Russian aggression, causing Moscow to scale back its military project in the Donbass and saving civilian lives? Or would they incite a new round of escalation and a flood of new arms into the region?

The stakes of this question are incredibly high for Donbass civilians. With both sides placing their heavy artillery adjacent to residential areas (according to the head of the Organization for Security and Co-operation in Europe (OSCE) monitoring mission in the region), every escalation means more death and destruction for a population already traumatized by three years of war and civil strife.

I get no pleasure from the idea of Ukrainian soldiers, the men and women I see every day at checkpoints, being outgunned by Russian-armed separatists and the barely concealed Russian army. But while I hope that anti-tank Javelin rockets be used to hold Russian aggression at bay and save civilian lives, I believe we must consider other scenarios of how the addition of U.S. arms could affect this conflict.

Russian aggression is the fundamental cause, and every move Ukraine makes (defensive or offensive) is inherently a reaction to it. But this does not necessarily mean that Russia is the source of each new spike of violence in the conflict zone. I travel to frontline towns several times a week, and frequently ask residents which side starts the exchanges of artillery that crisscross above their heads. The general answer is “sometimes this side, sometimes that.” You can get the same conclusion from following the technically detailed but judgment-free patrolling reports by the OSCE.

There is reason to believe that the two largest escalation events so far in 2017 began with a “creeping offensive” by Ukrainian forces to improve their positions along the frontlines. This is an understandable move for soldiers pinned under enemy fire in vulnerable positions, but it may have triggered the massive firefights near the Svitlodarsk Bulge and between the warring sides in Avdiivka and Donetsk that took a dozen civilian lives and spread destruction on both sides of the front. Importantly, almost none of the advances were sustained.

A Ukrainian battalion commander told Radio Free Europe/Radio Liberty how his soldiers snuck into a no-man’s-land village outside Svitlodarsk called Novoluhanske and set up positions near the main employer, a pig farm. That night the separatists understood what had happened and began shelling the Ukrainian forces—and the farm, which was badly damaged as shelling continued into May. Just a small stretch of gardens separates the farm from the village, which itself has come under fire.

I have spent much time in that area. In the winter of 2014–15 residents lived through the hellish “artillery duel” when the separatists and Ukrainian army pounded each other’s towns with shells and rockets. Later I helped re-equip a bombed and looted kindergarten and replace the shrapnel-scarred roof of the community center. The idea of death flying into these towns again, after they have slowly pieced together a normal life and gathered money from parents to hold the kindergarten pageant, overwhelms me.

I am not suggesting that the Ukrainian forces as the sole guilty party in the continuing violence, especially considering Russia’s fundamental aggression. But whereas the creeping offensive was well discussed in Ukrainian media and even bragged about, I worry whether advocates are considering it when they calculate how U.S. arms will be used. And while we might recognize the basic moral right of the Ukrainian army to reclaim occupied land, our government has also repeatedly stated its commitment to the Minsk accords, which commit Ukraine and the separatist forces to (thus far unsuccessful) de-escalation.

Many voices in the government and press have been telling the Ukrainian people for three years that U.S. arms will be a game changer. One parliamentarian and military volunteer claimed that “with American weapons, we’ll push the Russians back to Siberia.” Also, a military commander recently told the Daily Signal, “If the U.S. sends weapons, it would completely change the war the next day.” Given these claims, Kyiv might feel it must capitalize on the arms transfers to shift the balance on the front. The Pentagon is considering providing Ukraine with Javelin anti-tank rockets, which are considered defensive. But such weapons could be used to cover an advance into the separatist-held territories defended by Russian tanks.

Some might hope that a Ukrainian advance would bring a conclusion to the war. But that is unlikely to be the result of any such offensive, be it creeping or galloping. In August, 2014 the Ukrainian army drove deep into the so-called “People’s Republics,” cutting Donetsk off from Luhansk and beginning to encircle them along the Russian border. The civilian casualties were awful as both sides reduced villages and city districts to rubble. I thought to myself, “This is horrific, but if it brings this war to an end, maybe it’s for the best.”

It didn’t. Most observers agree that the tide was turned by massive, direct Russian military intervention, which threw back the Ukrainian forces and culminated in the death of hundreds of Ukrainian soldiers at the Ilovaisk encirclement. Five months later Russia’s direct involvement again shifted the military balance, allowing the separatists to occupy the strategic and nearly destroyed cities of Debaltseve and Vuhlehirsk.

Would a Ukrainian advance produce a different outcome today? A year ago Elena Racheva from the independent Russian newspaper Novaya Gazeta interviewed soldiers and civilians on both sides of the frontlines. She reported on the mutual military buildup and the itchy desire of frontline troops on both sides to go on the offensive. This would set off a bloodbath, she wrote, “And if war returns, no one that I talked to will remain alive.”

Evgeny Shibalov, an activist who provided emergency humanitarian assistance to his neighbors in Donetsk before being deported by the separatist authorities, related to me that in the first artillery exchanges on the outskirts of Donetsk ambulance records showed one military death to twenty-five civilians. As the sides have settled into more defined positions that civilian casualty ratio has dropped considerably. But Shibalov is deeply unnerved by frequent talk in Kyiv and the Ukrainian media about emulating Operation Storm, a military operation conducted by the NATO-backed Croatian and Bosnian forces that drove Serbian separatists from the Krajina region. The modest arms transfers proposed by the Pentagon are unlikely to inspire the Ukrainian army to make such a bold assault, but any significant move to redraw the frontline could incite the kind of massive civilian casualties not seen since the terrible summer of 2014.

We also must consider how Moscow will interpret the “language of force.” Proponents of arming Ukraine claim it will send home more dead Russian soldiers, thus demonstrating to Putin that he cannot prop up the separatists with impunity. Seeing this U.S. resolve, he will reduce Russian provocations in Ukraine. But perhaps if we are underestimating the tolerance of Putin and his elite for the death of their soldiers and the numerous Ukrainian and Russian “volunteers” in the frontline trenches. I lived in Russia for the first year and a half of the Ukraine crisis and experienced the totality of Moscow’s information campaign. I left believing Putin had staked his legitimacy with the Russian public on this confrontation with America. Military defeat or even significant military setback for the separatists would be defeat for Moscow, only compounded onto a geopolitical scale.

I fear that Putin’s understanding of the language of force will be entirely different. Regardless of the actual impact of Javelin rockets, he could regard U.S. arms transfers as a symbolic test of who dictates conditions in the Donbass warzone. He could counter with a new wave of military hardware to demonstrate his resolve. The result could be a miniature arms race with lots of artillery being fired symbolically into the homes of living, breathing Donbass civilians.

And that means death and shattered lives, destroyed homes and livelihoods, and descent into basement bomb shelters and root cellars—where hope for a normal life rots in the dark.

Two years of working in frontline communities has shown me that while the current status quo is awful, civilians have so much to lose. I visited the towns near the Svitlodarsk bulge for the first time in March 2015. Gaping windows, cratered walls and smashed storefronts greeted the eye everywhere. Many whitewashed little houses were blasted into rubble. Today, with the efforts of Ukrainian volunteers, international NGOs and competent administrators the scars of war are barely visible. Small factories and workshops are re-opening and looking for workers.

In Stanytsia Luhanska, the rural suburb of Luhansk that was ruthlessly shelled by both sides, small farmers are returning from refuge elsewhere in Ukraine or Russia, filling in bomb craters in their massive gardens and repairing destroyed greenhouses. They sell their tomatoes and cucumbers through the “border crossing” to Luhansk, using the proceeds to fix their homes and repay debts accrued from two years without a harvest. “Of course we want to live like we did before the war,” I constantly hear. “But the way it is now, we can survive. Just so that the war doesn’t come back.”