The Real Danger: What If the Iran Deal Actually Works? 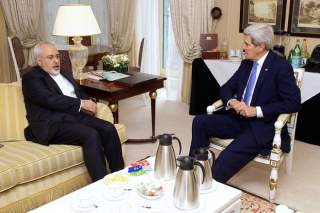 Last month, the P5+1 and Iran announced the Joint Comprehensive Plan of Action (JCPOA) that represents the long-anticipated result of nearly two years of negotiation with Iran over its nuclear program. President Obama called the JCPOA a historic deal “that will prevent Iran from obtaining a nuclear weapon.” One week later, the 15 members of the United Nations Security Council unanimously approved the 104-page resolution (UNSCR 2231) that is intended to fully implement the JCPOA.

The resolution defines “Adoption Day” as 90 days after the UN Security Council’s endorsement of the JCPOA in order to provide Congress with sufficient time to review and vote on this highly detailed and complex document prior to its implementation.

Congressional deliberations are important as core U.S. national security interests are at stake that warrant intense scrutiny and sober assessment. In addition to raising and answering important questions regarding key nuclear-related issues such as the efficacy of the inspections regime and any “technical documents” negotiated separately between the IAEA and Iran, Congress would be wise to closely examine the strategic implications of lifting the embargoes on Iran’s conventional weapons and ballistic missiles that will allow Iran to modernize its military (as well as its proxies) and threaten the regional balance of power in the Middle East.

In a recent engagement with the Council on Foreign Relations, Secretary of State John Kerry was asked why lifting the bans on conventional weapons and ballistic missiles sales was included in the JCPOA. He answered that USNCR 1929, which is the 2010 resolution that imposed severe sanctions on Iran’s nuclear program, states specifically that if Iran ever comes to table to negotiate, the sanctions (including the embargoes) would be lifted. While Kerry makes a valid point to counter critics’ argument that the bans on conventional weapons and ballistic missiles are “non-nuclear” issues that have no place in the JCPOA, he also believes that the U.S. “won” the dispute by keeping the embargoes on conventional weapons and ballistic missiles in place for five and eight years, respectively, instead of lifting them immediately as demanded by Iran, China and Russia.

Not everyone agrees with Kerry’s assessment about “winning,” nor does his explanation address the fact that the request to lift these embargoes was presented at the last minute in a not-so-subtle attempt to pressure the United States to yield on this strategically important issue. In a recent NBC interview, he said that “Even though the arms and the missiles were thrown in as an add-on to this nuclear agreement, it was always contemplated that if Iran did come and deal on the nuclear program, that was going to be lifted.” If this is accurate, then one wonders why the U.S. negotiating team did not raise the issue earlier in the P5+1 negotiation process that would provide time for a more thorough examination of the request without facing an imminent deadline.

Kerry also argues that the UN has multiple resolutions in place “that prohibit Iran from transferring weapons to Hezbollah, to the Shia militia in Iraq, to the Houthi, to Libya, to North Korea – all of which we can enforce.” Despite these agreements, there are currently some estimated 70,000 to 80,000 missiles and rockets aimed at Israel that have been in place prior to the start of the nuclear negotiations with Iran. Kerry believes that the current situation exists because “nobody has pressed the issue” of the transfer of these weapons. This statement suggests a lack of political will and raises an important question that Congress should consider in its deliberations: Where is the evidence that the international community will enforce UNSCR 2231 any more effectively than its predecessors – especially given the economic and other incentives to keep the deal in place?

Just days before the nuclear deal was finalized in Vienna, Chairman of the Joint Chiefs of Staff General Martin Dempsey testified before a Senate committee that “we should under no circumstances relieve pressure on Iran relative to ballistic missile capabilities and arms trafficking.” Nevertheless, USCR 2231 states that “Iran is called upon not to undertake any activity related to ballistic missiles designed to be capable of delivering nuclear weapons, including launches using such ballistic missile technology” for eight years after Adoption day, if not earlier.

Exploiting the ambiguity in this section of the agreement, Tehran subsequently issued a statement that asserted its ballistic missiles are “exclusively for legitimate purposes” (i.e., not used to deliver nuclear weapons) and “are thus outside the purview” of the Security Council resolution and its annexes. Iranian Defense Minister Brigadier General Hossein Dehqan provided a more blunt declaration that "missile-related issues have never been on agenda of the nuclear talks and the Islamic system will resolutely implement its programs in this field." One should not dismiss such statements as mere bluster, considering Secretary of Defense Ash Carter’s recent congressional testimony where he would not rule out the possibility that Iran could progress to an ICBM (Intercontinental Ballistic Missile) in 10 years.

Congress should ask the Obama administration whether the UN Security Council is willing to terminate the entire deal if a scenario arises where Iran has clearly violated the ballistic missile and conventional weapons embargoes, but remains compliant with the nuclear-specific aspects of the resolution. If the answer is “no,” then Kerry’s assurances that Iran faces “limits” on arms and missiles “to hold them accountable” seems to ring a bit hollow.

Such a scenario is not far-fetched when one considers Iran’s checkered past in honoring its commitments and Foreign Minister Mohammad Javad Zarif’s insistence that “violating the arms and missiles embargo does not violate the nuclear agreement.” Iran is anxious to begin replacing its 1970s vintage military hardware with the best equipment that Russia and other international arms dealers can provide. For its part, Moscow is more than willing to supply them with arms and gain some much needed currency from an economically rejuvenated Iran. Despite sharp criticism from the United States and Israel, the Kremlin has already lifted its ban on the delivery of the S-300 air and missile defense system to Iran.

Perhaps emboldened by its position on the embargoes, Tehran has also expressed its intent to “reconsider its commitments” under the resolution if any new sanctions are imposed over its support for terrorism and human rights abuses. Senator John McCain (R-Ariz), a vocal critic of the nuclear agreement, expressed his concerns that USCR 2231 will ultimately “strengthen Iran’s ability to acquire conventional weapons and ballistic missiles, while retaining an industrial scale nuclear program, without any basic change to its malign activities in the Middle East.” In addition to domestic opposition and skepticism in Congress, the Obama administration faces an uphill battle trying to convince its Middle East partners that the Iran nuclear deal makes them safer and that the United States remains committed to their security.

Defense Secretary Carter was dispatched to Saudi Arabia and met with King Salman and Minister of Defense Mohammed bin Salman, who expressed support for the Iranian nuclear deal, albeit with some reservations. Other Saudi officials have voiced concerns that the agreement will make the Middle East a “more dangerous part of the world” while enabling its competitor in Tehran to “wreak havoc in the region.”

The Saudi-led air campaign against the Houthi rebels that has claimed the lives of thousands of civilians in Yemen is a consequence of Riyadh’s fears that Iran’s growing influence will extend to its southern border. Meanwhile, King Salman recently met with top political leaders from Hamas to improve their relations, which is indicative of the monarch’s determination to rally the Arab world against Iran. Finally, Prince Turki al-Faisal told the BBC back in March that “whatever comes out of these talks, we will want the same,” which raises concerns about a regional arms race.  Such actions appear to contradict the notion that Saudi Arabia feels reassured about its security situation in light of the nuclear agreement with Iran.

Israel’s Prime Minister Bibi Netanyahu has been a harsh opponent of the nuclear accord and called the JCPOA a “historic mistake” that will “fuel Iran’s terrorism worldwide, its aggression in the region and its efforts to destroy Israel.” Secretary Kerry only exacerbated the tensions between Washington and Tel Aviv when he said, “I fear that what could happen is if Congress were to overturn it, our friends Israel could actually wind up being more isolated and more blamed.”

To further complicate matters, the nuclear agreement has not stopped chants of “Death to America” and “Death to Israel,” while Zarif proclaimed that the accord “puts the Zionist regime in an irrevocable danger.” At the same time, Ayatollah Ali Khamenei rants that U.S. policies in the Middle East are “180 degrees” opposed to Iran’s, while pledging his continued support for “friends in the region — the oppressed people of Palestine, of Yemen, the Syrian and Iraqi governments, the oppressed people of Bahrain and sincere resistance fighters in Lebanon and Palestine.” Unfortunately, it appears that UNSCR 2231 will provide Khamenei with the means to enact his policies by lifting the embargoes and economic sanctions against Iran.