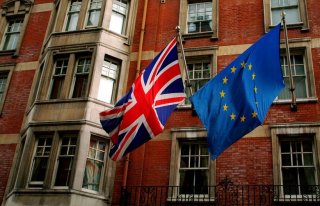 The narrative following the recent EU parliamentary election—the largest supranational democratic exercise in history—was mostly all doom and gloom. With anti-EU parties winning in France and the UK, the story has been one of alarm and rebuke for the pro-European center right/left consensus. More detached (or astute) observers would, however, be right in questioning whether this is the real story. After all, the British UKIP and the French National Front only make up about 6 percent of the newly elected Parliament. Their victories mean far more in London and Paris than they do in Brussels. The vast majority of the new Parliament remains firmly prointegrationist, and will no doubt carry on that agenda, for better or worse. No, the real story lies elsewhere and is just beginning to unfold in Brussels, Berlin and London. The real battle over EU democracy has just begun.

The election, with its low turnout, lackluster personalities and predictable outcome (a broad majority for the status quo, with bipartisanship tendencies that would scarcely be believed by Washington insiders) merely set the stage for the real European election: the election of the European Commission President and his/her cabinet. For the first time, this crucial decision will pit the newly elected Parliament against the governments of the member states.

This process is key because in the EU, it is the Commission that writes and proposes legislation and even oversees its implementation, acting as a powerful legislator-executor. The Parliament, which coapproves the laws with the Council, passed 93 percent of all legislation submitted to it by the Commission in the last five years. The choice of Commission President will, therefore, be far more important than the European Parliament election, not just for the EU agenda and policy over the next five years, but for the nature and future of the European project itself.

The ballot ink had barely dried in Italy (the last state to vote) when the winning party in the Parliament election, the center-right European People’s Party, put its lead candidate Jean Claude Juncker forward for the European Commission Presidency. The opening salvo against him was fired days later, when the UK’s David Cameron made clear that a staunch integrationist was an unacceptable choice, and even Angela Merkel refused to endorse Juncker. What followed was a firestorm of negative press against Merkel in Germany, and a remarkably swift reversal on her part, with a firm endorsement of Juncker. The UK dug in and was joined to varying degrees by France, Italy, Sweden and Hungary. The battle lines were drawn up, and after Juncker, in a defiant interview in the German Bild am Sonntag, publically accused the UK of blackmailing Europe, the stage was set for a showdown.

Not only is this new contest for power more important than whether the barely distinguishable center-right or center-left parties eked out a narrow plurality in the European Parliament, the process, for once, may be more critical than the outcome. The struggle between the Parliament (with its mandate from the people) and the Council (representing the governments of the member states) goes to the core of the idea of supranational democracy. Who should prevail in choosing—the representatives of the people in parliament, or the governments of the states? Sidestepping the fact that the Parliament is stretching the legal language of the rules to a breaking point, their right to confirm the nominee makes them a legitimate player in the game.

Over the next month or so, alliances will shift, states will either be for Juncker or against him, and new names will be thrown into the mix. In the end, though, the prevailing name may be overshadowed by the significance of which institution comes out on top. If the Parliament prevails, it will be a watershed moment in supranational history, and one that will be closely watched by every nascent regional integration organization in the world, from UNASUR in South America to the African Union, and perhaps even the newest kid on the bloc, Putin’s Eurasian Union.

Over the 60-plus years history of European integration, the European Parliament has grown in power at every treaty revision, in hopes of legitimizing and democratizing the increasingly relevant EU. At the same time, voter turnout for European Parliament elections was consistently in decline until this last election, when it stayed virtually the same. Unlike the Parliament’s jubilant declaration that voters are finally more interested, a more accurate description might be that the numbers have finally hit rock bottom and have plateaued. The perception of a so-called democratic deficit in Brussels has only deepened, despite the ongoing empowerment of the European Parliament. A recent AMR poll conducted across fifteen European countries found that only 8 percent of respondents knew of Juncker. Is the Parliament really the EU’s center of democratic gravity toward which power should tip?

The power to select the head of the EU’s executive rightly rests in the hands of the Member States, who, as the masters of the EU treaties, have repeatedly ceded power to the supranational parliament they created, and for whom this Frankenstein monster is becoming harder and harder to keep within the parameters they set for it. The makeup of the European Parliament, in fact, has more to do with national political issues than it does with EU-wide ones. Every government represented in the Council has its own democratic mandate from its national electorate; and those governments’ mandates are stronger than those of the EU parliamentarians.

What this battle is really about (and why it bears such close watching) is whether the states are still in charge of the delicate supranational balance they have created, or whether the organization is taking on a life of its own, beyond the will and control of its founders. Despite the European Parliament’s name and propaganda, the European Union is a Union of states, first, and of people, second. Every international organization is—it’s what sets them apart from international NGOs or nation-states. The EU is and should continue to be run by the democratically elected governments of its member states and the institutions they created to facilitate and support their integration and cooperation.

Despite its persistent distance from the people, the European project, for all its abstraction and technocracy, has been a boon for the continent and is being emulated around the world. The greatest danger to this project is not the people’s loss of faith in it, but rather, the states’ loss of faith in it. If the states ever feel like they’re losing or have lost control of the EU, they will walk away from it. It’s no surprise that David Cameron’s UK, which is the closest to reaching that tipping point, is leading this fight of the states against the European Parliament. Perhaps Jean Claude Juncker shouldn’t take it so personally—it’s not so much about him as it is about saving a Europe of the states. He is not the threat to that vision, but the institution championing him is.

The European Parliament has, and not for the first time, overstepped and overreached. Like Pinocchio, they told the fraction of the electorate that paid attention a big lie. They told them that they were not just electing some parliamentarians, they were picking the next European-in-Chief. The battle over this lie is now under way, with the Parliament and a large segment of the media desperate to make it true, and a core of member states desperate to keep Pinocchio from becoming a real boy. Nothing could be more dangerous to the supranational experiment than its rebellion against its member states. And the outcome of this battle will have implications on the future of institutional design of international organizations around the world, as well as the future of the EU and the states that will (or won’t) remain in it.

Radim Dragomaca is the outgoing Editor-in-Chief of the St Andrews Foreign Affairs Review.