The Real Lesson of the Barcelona Attacks 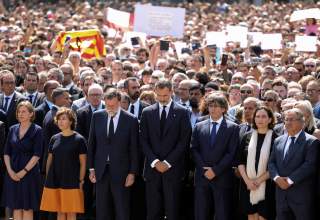 Spain is no stranger to terrorism. Between 1968 and 2011, the Basque separatist group  Euskadi Ta Askatasuna (ETA) killed more than 820 people. In 2004, Al Qaeda claimed credit for coordinating bombings in the Madrid rail system that killed 192 and injured over two thousand people. Thursday’s attacks in Barcelona and Cambrils appear to be something new. The ETA has had a clear, realizable political objective behind its violence all along. The Madrid bombings were widely understood as retaliation for the support that the center-right government of José María Aznar had shown for the U.S. war in Iraq. The timing of the attacks suggested their political objective: general elections were to be held just three days after the attack. They were held, and Aznar’s party lost.

Investigations into the Barcelona and Cambrils attacks are still ongoing, but to all appearances so far, these incidents do not involve simple political goals. Early indications are that the attacks were inspired by the Islamic State’s call for terror in Europe. There are obvious parallels to other recent ISIS-connected attacks, such as the November 2015 killing spree by Islamists in Paris that took the lives of 130 people, the March 2016 suicide bombings in Brussels, and the spate of recent vehicle attacks in London, Nice and Berlin. Fourteen people have died so far from the van attacks in Barcelona and Cambrils. The terrorists had greater ambitions, however, which became evident on Wednesday night when a house in the small town of Alcanar exploded. Investigators believe that the terror cell responsible for Thursday’s improvised attacks had been planning to carry out bombings.

The driver of the van used in Barcelona is still on the loose; police have named the suspect as seventeen-year-old Moussa Oukabir. The five attackers involved in the Cambrils incident were all shot dead by police. Several arrests have been made, which include two Moroccans and one suspect who was “born in Melilla, the autonomous Spanish city on the north coast of Africa,” according to the BBC News. The suspects, the modus operandi and the Islamic State’s claim of culpability all fit together, though with terrorism investigations it is never safe to take anything for granted. Provisionally, however, a few things might be said.

First, a danger that could not be ignored after the Madrid attacks in 2004, and the further Islamist bombings in London a year later, is still present in Europe. This is an extraordinary failure on the part of the continent’s elected leaders. While far-right political activity is a source of great anxiety for Europe’s governing class, a much more violent force has gone unchecked. The far Right has tried, and largely failed, to capitalize on this fact. Too many mainstream parties rest content with this, defending European liberalism in the short term at the almost certain price of undermining it in the long run. The attitude of too many of Europe’s leaders seems to be that modest police measures are adequate to control the Islamist threat, while systematic moral firmness is necessary in the face of right-wing electoral appeals. The resurgence of Islamist terror in the past decade proves this to be wrong. Islamism has to be even more culturally unacceptable than right-wing ethno-nationalism if European liberalism is to survive. Additionally, more than just counterintelligence and law-enforcement operations are necessary to strike Islamist terror at its root. Immigration control, for one, is not an issue that should be left to an unelectable and incompetent far Right. But also, liberalism cannot continue to be complacently multicultural. Europe need not face a choice between suicidal cosmopolitanism and blood-and-soil chauvinism. Liberalism, broadly defined, can once again recognize its Western character and act accordingly when setting immigration and cultural policies.

Second, for all the contempt that America’s own liberals show toward Donald Trump’s moves to restrict travel and immigration from certain Muslim countries—as well as toward the populist right’s largely chimerical fears of sharia law in the United States—they ignore the civilizational truth behind such things at their own peril. President Trump and his supporters feel in their bones that this country is threatened by a loss of confidence in its historic character and a great naiveté toward long-term threats from outside. Europe’s continuing vulnerability to Islamist terror confirms what many on the American right know but can hardly articulate. Both America and Europe have become so thoroughly indoctrinated by an antinational form of liberalism that any defense of the nation or of Western civilization begins to sound like bigotry. Words, arguments, and even the emotional and psychological underpinnings of an affirmation of country and culture have been lost—only to be replaced by anger and caricatures. American liberals need to be tougher. They must learn to look beyond the crude superficial manifestations of right-wing sentiment in America to recognize the deeper truths behind them.

The Islamic State will not long survive; it is not a political or military threat to the West. But the West’s own anomie—and the steadily erosive force of Islamic civilization’s disorders upon a West that has, in effect, lost its capacity to rebuild—will lead to continuing mass-casualty attacks and ultimately to political upheavals. The Barcelona attacks are a reminder of how Europe failed to respond to the horror inflicted on Madrid. How many more warnings will the West require?

Image: Spain's King Felipe (C) looks down as he stands along politicians including Prime Minister Mariano Rajoy (3rdL) and President of the Generalitat of Catalonia Carles Puigdemont (3rdR) while they observe a minute of silence in Placa de Catalunya, a day after a van crashed into pedestrians at Las Ramblas in Barcelona, Spain August 18, 2017. REUTERS/Sergio Perez​