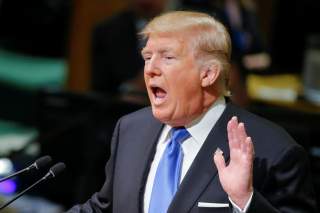 President Trump has once again set himself apart from others who have occupied the Oval Office in the modern era. His speech Tuesday at the United Nations signaled a big change, but that change wasn’t the one that many observers were expecting.

Wrapped Up in Rhetoric

Pundits and other professional Trump-watchers have a tendency to obsess over every word or gesture coming from the president. Not just what he says, but how he says it, are analyzed repeatedly—most often with an eye to find and amplify every unpleasant detail or inference unearthed in the process.

More than six months into his first term and there is still a lack of understanding about “the two Trumps.” There is “Showman Trump,” who tweets and makes off-hand comments aimed at sparking fury, outrage, confusion and uncertainty among his detractors and rivals that whip up enthusiasm among his supporters at the same time. Then there is “Serious Trump,” who is a determined, demanding and deliberate decisionmaker.

It was Serious Trump who made the decision on Afghanistan policy and announced a new course of action in a measured and compelling speech. We have seen the same Trump in bilateral meetings with other heads of state.

But Serious Trump wasn’t always front and center in his national-security and foreign-policy speeches. The speech at his first NATO summit was disastrous. It was a confusing admixture of campaign rhetoric and careless language. But that quickly changed. His Warsaw speech was far more weighty, as was his address to Congress and remarks to the nation on Afghanistan.

Those who conflate and confuse Serious Trump and Showman Trump likely had low expectations for the UN address. Many people said they would cross their fingers, hoping it wouldn’t mimic a campaign speech or one of Trump’s post-inauguration rallies. They needn’t have worried. It is apparent that Trump has figured out the difference and knows when to act like the “people’s president” and when to play the world statesman.

Much of the coverage of Trump’s speech focused on who Trump “called out,” such as the old “Axis of Evil” countries, ISIS, Hezbollah and even socialism via Venezuela. But the underlying theme of the president’s message is way more important. It reveals Trump’s view of how the world really works. Understanding that perspective is important—not just to Trump-watchers, but to the future of the world.

That message is important. It also conflicts with two other world visions.

One competing vision (the one likely held by most in Turtle Bay) says that it is the international organizations that should impose global order through global governance. To make that happen, nation-states must turn over more authority to those organizations.

The other view is held by the likes of China and Russia. These regimes scoff at the idea that far-off bureaucrats should dictate the norms by which the world will be managed. Instead, they simply take what they want and rewrite what is normal to conform to what they demand.

It has to be acknowledged that Trump did not specifically call out Putin or Xi. They were not mentioned in his list of bad boys doing violence to the world order, like Kim Jong-un. But make no mistake: the Trump administration has been treating Russia and China like adversarial regimes.

Trump still has hopes that the Kremlin and Red Square will take the “off-ramp” and pursue less confrontational policies toward the United States and its interests. That is likely the reason for why he did not single them out in his speech. But clearly, Trump sees Russia and China at the root of many of the world’s problems.

At the end of the day, the two non-Trumpian visions outlined above threaten freedom and democracy everywhere. Whether one dreams of a rigid global order imposed by a collection of unelected officials or embraces the simple formula of “might makes right,” both visions will take the world to dark places.

Trump may be a lone voice for a third way, but he articulated it well at the United Nations. He delivered a clear call for the people of the world—and the nations of the world—to cherish freedom and reject the iron cage of unaccountable institutions or the iron fist of despotic regimes and terrorists. That’s the real meaning of the talk at Turtle Bay.