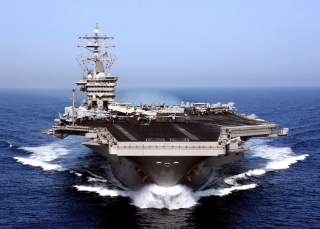 During the 1982 Falklands War, Argentina possessed a measly total of five Exocet anti-ship cruise missiles with which to face down the Royal Navy in the South Atlantic. Had that number been more like 50 or 100, that conflict might well have had a very different ending. This important lesson has not been lost on China’s military chiefs. Indeed, China has placed great emphasis on anti-ship cruise missile (ASCM) development over the last three decades and is now set to reap the strategic benefits of this singular focus.

Western defense analysts have taken up the habit of fixating on the “whiz-bang” aspects of Chinese military modernization, such as the anti-ship ballistic missile (ASBM), or threats that are largely hypothetical, such as Beijing’s supposedly fearsome cyber arsenal. However, it will be unwise to ignore certain more mundane threats of proven lethality. These concern, at least in part, China’s emergent naval air arm and not the carrier-based part of that air-arm – which continues to be the red herring of Chinese naval development, at least for now. Flying from bases in the Mainland out to longer ranges with more sophisticated search radars and electronic countermeasures, the large fleet of land-based aircraft will now deploy some of the world’s most advanced anti-ship cruise missiles to boot. This rather mature capability might be described as “air-sea battle” with Chinese characteristics.

This edition of Dragon Eye probes a survey from the October 2014 issue of Mandarin-language defense magazine 舰载武器 [Shipborne Weapons] of “中国海军空基对海打击力量” [The Chinese Navy’s Air-Based Maritime Strike Force]. The magazine is published by a Zhengzhou institute of the China Shipbuilding Industry Corporation (CSIC), a primary actor in China’s ongoing naval modernization process.

The background sketch of this force reveals a keen appreciation by the Chinese analyst of the PLA Navy’s early difficulties in developing a naval air strike force. It is noted that the absence of such a force was plainly revealed during the 1974 battle with Vietnam for the Paracels in which Chinese supporting forces were totally absent in the air above the sea battle. With the initial deployment of the stubby Q-5 attack aircraft, as well as the low-performing H-6 bomber and J-7 fighter-bomber, China could be said to have a strike force, though admittedly one with rather pathetic capabilities. The Q-5 could hardly muster a combat radius of 300 km, the H-6 was too expensive, and the J-7 suffered from a weak radar, low survivability, and backward electronic systems.

A turning point in Beijing’s quest to develop a credible “air-sea battle” strategy occurred in 2004 with the arrival of 24 Su-30MK2s from Russia. For the first time ever, the Chinese Navy possessed a modern, capable strike platform. Not only could this aircraft fly well beyond the first island chain to a radius of about 1,300km, but these imported planes came equipped with the highly prized Mach 3 KH31 ASCM. At the same time, Chinese military leaders were not content to rely on imported weaponry and during the late 1990s pursued extensive upgrades for both the H-6 bomber and the J-7 fighter bomber.

The H-6 M/G joined the Chinese Navy in 2003-04 and featured an advanced search radar, fire control, navigation, communications, and electronic countermeasures systems. Similar improvements and a new engine were among the major alterations to J-7 that resulted in the JH7A, which became a major focal point of Chinese naval strike aviation for the last decade. The author of this analysis concludes: “… JH7A has received lot of resources from the Chinese Navy, and at this time there are already three regiments comprising more than 80 aircraft in service. Together with the 24 Su-30 MKK2 multi-role fighters, they form the foundation of the Chinese Navy’s tactical strike force against sea [targets].”

Above all, however, it is the widespread use of the YJ83 ASCM (C802) with a 150 km range in combination with the new, upgraded aircraft variants discussed above that has radically improved China’s ability to strike naval surface targets from the air over the last decade. A copy of this missile made headlines when one struck and achieved a mission kill against an Israeli corvette in 2006. Its effectiveness is further suggested by the many countries that have sought to purchase this particular Chinese ASCM. The article interestingly notes that while the YJ83 is subsonic, the imported Russian-made supersonic KH31 “in certain situations with respect to combat effectiveness” actually does not compare favorably to the YJ83. But this analysis also suggests that, actually, even in the scenario of a multi-axial attack the YJ83 is “less than ideal” against a carrier battle group or large-size air defense destroyer. Summing up the appraisal of China’s first generation aerial maritime strike forces, the author concludes candidly that compared to neighboring armed forces, that Chinese forces were “并不强大” [not especially impressive], but against USN carrier battle groups or against Japanese forces “更难以发挥什么作用” [they would hardly have any use at all].

By contrast, according to this late 2014 Chinese analysis, “… the second generation of long-range aerial maritime strike forces … will be completely able to satisfy the Chinese Navy’s strategic combat requirements for the new century.” It continues that internet sources and photographs reveal that the “second generation forces are already equipping combat forces …”

The JH-7B fighter attack represents a further dramatic refinement of this workhorse of Chinese maritime strike aviation. A prototype first flew in 2012, and serial production is apparently expected to begin in 2015. The improved aircraft is said to increase the combat radius to as far as 1,800 km and even out to 4,500km since it has the aerial refueling capability that its predecessor lacked. Within the Chinese Navy’s developing “high-low mix,” this airframe will form the lower class platform and this analysis explicitly suggests the JH-7B’s “low price” is a factor in the acquisition strategy. A more high performance strike aircraft will be the J-16, which seems to be an indigenized version of the Su-30MKK2. This report claims, moreover, that it will be superior to the Russian aircraft in several respects, including its sensors. This new aircraft is said to be already entering service with the PLA Navy. Interestingly, the article notes that while a large strike platform is desirable, the PLA Navy nevertheless does not expect to continue improvements to the H-6 bomber, but rather prefers a complete redesign of an aircraft intended to carry 8-10 long-range anti-ship missiles out to ranges of 3,000 km or more.

But as anyone familiar with the B-52’s long run in service with the U.S. Air Force, maritime strike is not really about the aircraft, which will be by and large “shoot and scoot,” but rather about the missile. Here, the news is grim. This Chinese analysis yields up two new and potent arrows in the Chinese Navy’s quiver. The first is the Mach 3 YJ-12. This supersonic ASCM is capable of ranges up to 300 km. The second is a sub-sonic ASCM with a range of up to 800 km that is designated as YJ-100. Such capabilities imply that, as least for the near future, U.S. forces may be “outgunned” by China’s emerging ASCM inventory. Nor is it clear that U.S. defense analysts fully understand the nature of the threat. A 2014 U.S. government-sponsored study of the Chinese ASCM threat, for example, seems to largely neglect the “second generation” of aerial maritime strike platforms, both missiles and aircraft, discussed in this Chinese analysis.

According to this Chinese article, China aerial maritime strike has increased its combat efficiency in recent years by tenfold. It is noted that further breakthroughs are required (e.g. long range reconnaissance), but this Chinese author concludes: “The building of the second generation aerial maritime strike force will allow China to effectively control neighboring sea areas and sea lines of communication …” Future Chinese ASCM designs will seek to push the envelope on speed up to Mach 4 and even Mach 6, according to this analysis.

A standard response to concerns over Chinese aerial maritime strike forces is that U.S. aircraft and pilots are superior plane-for-plane and pilot-for-pilot. Perhaps that is still true. Hence, the Chinese attack aircraft will hypothetically be “splashed” before getting close enough to unleash their deadly array of missiles. Unfortunately, that perspective does not sufficiently account for not only the increasing range and sophistication of Chinese missiles, but also the likelihood that Chinese missiles will destroy air bases such as Kadena in the first phase of any conflict. That opening salvo from China’s Second Artillery could leave China’s large air forces a relatively free hand to establish air superiority and to hunt widely in the near seas and beyond for U.S. carrier battle groups and other adversary surface action groups. This Chinese article seems to provide even more of a basis for the argument to invest in the U.S. Navy’s submarine force, which is nearly invulnerable to Chinese ASCMs, or in the versatile F-35B that may yet succeed in hiding out and operating from remote and rugged airstrips around the Asia-Pacific. It also perhaps strengthens the argument for caution and restraint in our dealing with the Panda, which evidently has increasingly sharp claws.