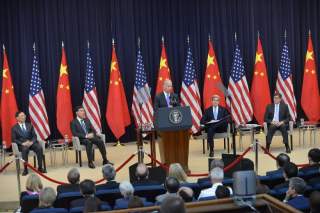 Early 2013, President Obama yielded to Beijing’s insistent backstage pressure and, with China’s authoritarian chief Xi Jinping beaming by his side, announced a “new type of major power relationship” with China:  In other words, a formulation of Chinese parity with the United States.

Since that meeting in California, even the pretense of positive feelings evaporated. Make no mistake, nothing in the world needs resolute American leadership more than dealing with a China that’s both on the march and economically erratic—as misguided steps to buttress Shanghai share prices this past week show.

In short, and despite renewed uproar in Ukraine and the Middle East, China and Asia will be dominating the 2016 U.S. elections as the most consequential foreign issue, bar none.

It’s not just a matter of “managing” or even “counterbalancing” China. Nor should we succumb to a temptation to “democratize” China, as some Republican commentators would have us do. The root cause of the Chinese challenge lies in two sources, whatever that country’s form of government—Han Chinese chauvinism and cascading wealth enabling military expansion that was unimaginable a few years ago. From these two fonts come Beijing’s intent to marginalize and then displace America in Asia.

Despite Obama’s claim to have “rebalanced” America’s Asia policy, it was the previous administration that, by 2007, had resumed strategic discourse with China’s neighbors, all anxious about bad behavior going far beyond Beijing’s “assertiveness” in the South China Sea. The Obama administration didn’t craft but, instead, inherited a renewed emphasis on America’s place as a “resident power in Asia.” By 2007, bilateral discussions became the norm with anxious countries, large and small, along China’s long periphery.

Sadly, while the incoming Obama administration adopted and even (as in normalizing with Burma) expanded the Bush agenda with Asia, White House fecklessness elsewhere in the world has telegraphed hesitation and lack of resolve. Asians watch Obama’s failure to prioritize U.S. foreign issues using a metric of immediate, as well as of long term, importance. The latter counts most in Asia, where China is playing a long game, using “sweet & sour” diplomacy to telling effect.

Bluster now greets U.S. indictments of Chinese officials for cybercrime. We get the same response to major or minor frictions, from car tariffs to rare earth mineral export controls. In recent months, Beijing’s “island creation” in the South China Sea (dredging to create permanent land on shoals and atolls) has put a big butcher’s thumb on the scales of regional balance, tilting them away still more from the United States, whose presence prevents Chinese hegemony.

Once again, the Obama administration has responded tepidly, belatedly, and reactively. Yet the U.S. military, especially the U.S. Navy, knows that China, and the region, need American clarity. Luckily, much of what is now occurring in the western Pacific never reaches the public domain.

Now that belated U.S. resolve has become evident—in surface, subsurface and air encounters with the Chinese military—the diplomats in Beijing are sending a “sweet” message, signaling they’re now willing to taper off the island creation.

It’s but a temporary respite. Chinese threats will be throwing long shadows across the western Pacific, and will also loom large over the coming U.S. elections. During the remainder of this year, and the next, proportionate U.S. military movement in the western Pacific, and corresponding diplomacy all across the pan-Asian arc, will inevitably influence the presidential campaign.

The Obama administration had been slow to accept senior USN advice about the need to show determination. A new generation of admirals is coming into positions of influence and command. They see through the latest Chinese tapering ploy, an old gambit: push and push and then, for a little while, relent and allow one’s adversaries the illusion that responsive moves have had a moderating effect.

Yet the underlying momentum continues, unabated. Party Chairman Xi has chosen an unequivocal path. The correct—the ONLY—way to respond lies in a strategy of restless proactivity, avoiding the game of thrust-and-parry, a game in which too often we parry, belatedly; a game in which we surrender the initiative.

The current administration’s fecklessness telegraphs in capital letters our reluctance to square off in the western Pacific. It enables the Chinese to equate the understandable American war-weariness to reluctance in recent years to push back, and then push back again without waiting for the next provocation, the only serious way to signal enduring intent.

In our travels and previous work, we’ve seen how senior Chinese officials know next to nothing about U.S. maritime resolve. They don’t understand that what they call our “forward presence” stems from strategic intent formed in the infant American republic, in the late 18th century, and continuing without break to the present day.

This mindset arose in the days of Yankee traders, and continued in exploratory trading trips like those undertaken by Commodore Perry’s black ships in the 1850s. It’s a reflexive attitude continuing on as well from the Spanish American War and found in the great decisive battles against Japan during WWII.

Flush with new capability which it doesn’t know how to use, the Chinese military doesn’t realize the depth of U.S. maritime skills, including—lest there be any misunderstanding—our insistence on retaining a Fighting Navy. Recent public naval annals show this intent very well. To be blunt, fatigue over protracted land wars in Eurasia since 2001 doesn’t have the slightest impact on our “forward position” in the western Pacific.

During the coming presidential campaign, we can expect a resumption of Chinese activity such as the dispatch last year of vessels to accompany an offshore oil rig into waters claimed by Vietnam. Expect Chinese fighter planes to come dangerously close to Japanese, U.S. and other allied patrol aircraft. Expect Chinese ships to continue to harass seismic survey vessels off Malaysia’s Borneo coast.

In short, expect no cessation of moves by China to probe U.S. resolve. This in some ways makes things simpler. The love-me/love-me-not pas de deux is over. China’s steady provocations mean much more than another feint in a static, tactical standoff. Within our country’s security establishment, some very basic assessments of long term intent have now changed, irrevocably. The notion of a cooperative U.S./China economic relationship, nicely balanced by some security hedging, is DOA, however much residual business community voices might wish otherwise.

For several generations now, the United States and its partners have offered full economic openness to China. Huge trade and investment gains have given China a growing military capacity and double-digit annual military spending growth. The old template—a partly cooperative/partly competitive relationship—no longer makes sense, though Chinese financing of U.S. sovereign debt crimps our strategic flexibility. We would all wish for a less threatening scenario, but the consequences of strategic mistrust cannot be finessed any longer. While Obama and the United States has dithered, China develops world-class anti-ship missiles. We must now mull plans aimed at striking mainland China preemptively.

We coasted for a long time on two contradictory paths—economic integration vs. security confrontation. No longer. In declaring its territorial demands a “core interest,” China poses a direct challenge to our Asian security partners, large and small, and to us. Nothing has a more central role in American strategy than maintaining global norms about access—meaning access to open trade, to freedom of navigation, to common rules. We apply this strategic insistence everywhere, from Venezuela to the Maghreb. Nothing will make us change, especially in the western Pacific.

Self-interestedly, China entered the global, U.S.-enabled trading and investment system. This rules-based order belongs just as much to China as to the West, Japan, or India, but Beijing feels no loyalty. Its increasing economic clout gives it the weight to shape common rules, but the words “responsible stakeholder” don’t figure into Beijing’s security agenda.  China’s force-fed equities markets show a similar heedlessness.

By comparison to the daily alarms in the Middle East and Eastern Europe, East Asia may seem far away. But the stakes there couldn’t be bigger or more consequential; real not fanciful risks of conflict, localized or something wider, have become more pronounced. Add to this some basic concerns about China’s domestic economic stewardship. These anxieties will increasingly overshadow the coming election campaigns.

James Clad was U.S. deputy assistant secretary of defense for Asia from 2007-09, and is Senior Adviser for the CNA in Arlington, Virginia. Ron Wahid is Chairman of Arcanum Global, a strategic intelligence company.