The Real Nuclear Nightmare When It Comes to U.S.-Russian Ties 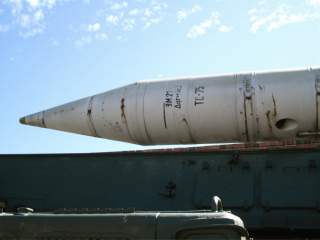 In the dark days at the turn of the year, all but a few bits of U.S.-Russian cooperation to strengthen nuclear security in Russia came to a halt.  No longer, for now at least, will U.S. experts work with counterparts at major Russian nuclear facilities to implement better means to prevent insiders from stealing fissile material, or to improve accounting, so a theft would be quickly detected.

The crisis in Ukraine, adding to issues that have chilled relations with Moscow for years, provoked a deep freeze in U.S.-Russian relations. A two-decade era in which the United States and Russia worked together to dismantle and secure the deadly legacies of the Cold War appears to have drawn almost entirely to a close.  The danger of nuclear bomb material falling into terrorist hands will be higher as a result of this downturn in cooperation – putting U.S., Russian, and global security at greater risk.

At a mid-December meeting, Russian officials confirmed what they had said for months; with only a few exceptions, Moscow cut off the U.S. role in this work.  Russia is not willing to be seen as needing America’s help to manage its nuclear stockpile. Given that Washington cut off nuclear energy and science cooperation as part of the sanctions over Russia’s behavior in Ukraine, it was not surprising that Russia would retaliate in the realm of the nuclear security work valued by the United States.  Russia has also announced it will not participate in the next and likely last Nuclear Security Summit in 2016.

To be sure, tremendous improvements in nuclear security in Russia had already been achieved.  Potential nuclear bomb material is now in thick steel vaults with security cameras and armed guards when it is not in use, and there are radiation detectors to catch would-be thieves if they try to steal it.

But nuclear security is never “finished.”  It must be constantly improving in the face of evolving threats. There are still weaknesses in nuclear security in Russia that thieves could exploit – particularly corrupt insiders who understand how security systems work.  And no one knows whether Russia will devote the resources necessary to sustain the levels of security that are now in place.

The insider threat is real: in 2012, for example, the director and two of the deputy directors of one of Russia’s largest plutonium and highly enriched uranium facilities were arrested for millions of dollars’ worth of corruption (though not stealing nuclear material).

As custodians of the world’s largest nuclear stockpiles and the most experience in guarding them, the United States and Russia have much to learn from each other about how to fix such problems. A 2012 intrusion at the main U.S. site that stores highly enriched uranium by an 82 year-old nun and two other protesters showed there is more to do to strengthen nuclear security in the United States as well. Despite their differences over Ukraine and other issues, the two countries share a responsibility to work together to ensure that their stockpiles are secure and accounted for, and to lead the way in helping other countries provide effective security for their own inventories.

While the politicians argue, technical experts share a common language and can work together to develop solutions to dangers that face us both. Indeed, from the Cold War to the present, dialogue among scientists and engineers has often offered a critical back channel that helped the governments find new solutions.

Some small cooperative nuclear security projects are still under way, ranging from work with the Russian nuclear regulators to security improvements at a handful of small facilities.  The two sides should use these remaining projects as the foundation to build a new partnership of equals, with resources and ideas from both sides, rather than a donor-recipient relationship.  This should include exchanges of best practices in addressing particular nuclear security challenges; joint R&D to develop new, more cost-effective security and accounting systems; joint work to help other countries improve nuclear security; and exchanges of visits to nuclear facilities to compare approaches and offer confidential advice on particular aspects of security.

Some of this can and should start soon – but more is possible if there is progress in resolving the crisis in Ukraine. If that progress comes, restarting nuclear energy and nuclear science cooperation should be a top priority, to help pave the way for an expanded nuclear security dialogue.  The experts from the U.S. and Russian nuclear facilities can reduce dangers to us all – if their governments will let them work together.