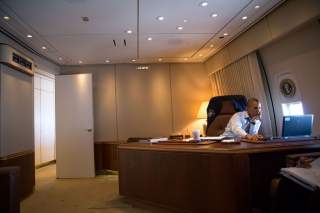 President Obama’s speech at West Point this week was supposed to be a clear declaration of his foreign-policy doctrine and a full-throated response to his political opponents. But many observers were left feeling empty.

Some claimed the president defended policy inaction without offering a positive vision of America’s purpose in the world. According to Council on Foreign Relations President Richard Haass, it failed to “articulate a rationale for what we should be doing.” More importantly, it didn’t project the right mix of confidence in American exceptionalism and resolve to stare down anyone who would challenge it. Instead, it would bind American hands in the face of revisionist powers who seek to undermine the liberal international order.

Even more sympathetic observers felt that the speech was half-hearted and provided little inspiration. Foreign-policy realists were gratified by the reminder of the limits of American military power, but they were upset that Obama failed to lay out his priorities about what issues are important to U.S. national interests—and what issues we can afford to ignore. Writing in The New Yorker, John Cassidy called the president a “reluctant realist” and concluded that his goal was “to defend his policies, while refusing to fully acknowledge them for what they are.”

For years, critics have complained that Obama’s speeches are full of soaring rhetoric, but lack substance. Not so this time. The problem now is that his speech, while containing plenty of debatable policy positions, didn’t have enough cheerleading.

The reasons for this odd turnaround are the global balance of power and the purpose of U.S. grand strategy. The United States finds itself in an extraordinary position: no nation-state has ever enjoyed such a concentration of power. Washington spends vastly more than any state on military capabilities and maintains technologically dominant armed forces manned by highly professional officers and enlisted personnel. Its lead is buttressed by a huge intelligence community that generates an astonishing amount of information from a variety of sources. Its economy is huge and diverse; even after the financial crisis of 2008, it is in far better shape than any plausible competitor. The U.S. technology sector innovates at breakneck speed, and U.S. colleges and universities, though not without problems, remain the envy of the rest of the world. On top of all that, it remains protected by two large oceans and a large nuclear arsenal.

As Obama noted at West Point, the sources of American power are deep-seated and durable. No other state or nonstate actor can realistically challenge the United States for political influence. The only state remotely resembling a “peer competitor” is China, but there are reasons to believe that the relative gap is actually growing between the two countries. While China clearly has great-power aspirations, it faces profound economic, environmental and domestic problems that it must overcome if it hopes to deal with the United States on anything like level ground.

Nonstate actors remain a concern, but they do not meaningfully threaten U.S. security or prosperity. Al Qaeda, for instance, looks nothing like the group that pulled off the 9/11 attacks. In the 1990s, it was a well-organized outfit with a charismatic leader and a reliable flow of cash and resources. Today, its organization is shattered and its leaders are almost all dead or imprisoned. What remains is a dispersed hodge-podge of groups all pledging loyalty to the cause, but most of whom are fighting in local conflicts.

What does this mean for U.S. grand strategy? In short, it means that America’s goal is simply the preservation of a very happy status quo. Over the last century, the United States outlasted fascist and communist great powers, while spending an enormous amount of blood and treasure exporting American values while simultaneously building up American forces. The result is that the United States sits atop the international order and is surrounded by a constellation of reasonably friendly states that share its ideas. It is remarkably secure. Indeed, it is so secure that it can afford to fight costly wars of choice without putting itself at serious risk.

Of course, those wars have proven to be increasingly unpopular, and it is hardly surprising that most Americans have been unenthusiastic about intervening in places like Syria that do not obviously affect U.S. national interests. The president’s own reluctance to intervene in such conflicts reflects this broader sentiment.

The problem is that a grand strategy of muddling through is not terribly inspiring. There is nothing glorious or heroic about upholding the status quo. As the president found out this week, it’s hard to come up with a stirring vision in the absence of a menacing enemy or an epic ideological struggle. Instead, he settled on warning about the dangers of overreaching while sprinkling the speech with a few applause lines about American leadership and strength. This wasn’t enough to satisfy critics of the administration, but in terms of grand strategy, the speech made a lot of sense. The fact that it lacked a positive vision simply reflects the fact that the United States doesn’t need one.