The Real Problem with America's Military 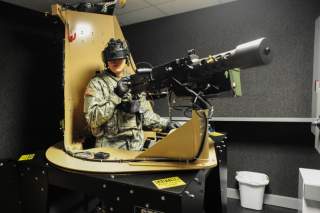 Sometimes the confusion emerges in the form of an identity crisis. The U.S. Army seems to have experienced this (and here and here) as it unhitched from protracted operations in Iraq and Afghanistan. While the Navy and Air Force embarked on Air-Sea Battle (later modified) and the Marines doubled-down on their role as the nation’s “crisis-response force,” the U.S. Army has struggled to explain its continued value.

More regularly, this confusion permeates policy discussions and military employment concepts among leaders pondering how to transform distant peoples and their ancient cultures into something approximating delegations to EU regulatory meetings. Adding to the fun is the military community’s decidedly unhelpful fascination with each new fad that promises to reveal some hidden truth about the use of force in the modern age or desire to incorporate a tech-sector savant’s insight into a “leading change.”

It is all very odd, not least because the military services have been in the business of undertaking military operations for centuries. Practitioners of war have presumably been students of war, or at least the use of force, and the history of such fields of study stretches back some five thousand years.

The history of conflict is about people trying to impose their will on each other or intimidating competitors into adopting a desired behavior or course of action by the threat (explicit or implicit) of force. Has the invention of the iPhone so fundamentally changed the nature of Man that millennia of human history have been relegated to its ash-heap?

Many “defense experts”—including those with operational experience, academic pedigree or both—seem to think so. And that fanciful thinking permeates much of the current debate over the use of the military as well as thinking about the role of each service and what they contribute to national security.

It is true that conditions change from one era of warfare to the next. As new technologies are introduced, the utility of one service may rise relative to another, just as offense and defense have traded advantages over time. But when one element rises to prominence, it does not mean that the others are permanently eclipsed or no longer of any value. Military organizations, just like people, tend to adapt to changed circumstances, albeit oftentimes in the wake of a dramatic failure. They should never willingly accept that some arrangement of factors is final. Consequently, each service finds ways to adjust to changes in its primary domain of operations, countering new weapons or tactics that rise to frustrate a current way of operating. Why then does doubt creep into a service’s confidence about its purpose or value?

It seems confused about its role, value, and purpose. Its messaging to Congress is downright incomprehensible, which is troubling because it should be able to explain the complex realities of war in simple terms to an audience that has very little understanding of the subject. It should have no difficulty explaining why land power is vitally important and will remain so as long as people walk the earth. Consider:

·      Air power is unconstrained by terrain. It is able to deliver anything deliverable by air—be it ordnance, people, equipment, or supplies—without much concern for the ground it flies over. It is able to cross distances at high speed. It is able to deny an enemy use of the air. It can attrit enemy capabilities and frustrate enemy movements on the ground. But air power has no permanence and cannot control terrain or people.

·      Sea power does much the same thing via water. While it moves slower than air, it can deliver massive loads, shift large forces from one place to another, deny the enemy use of the ocean, strike targets ashore from the maritime domain, and, most importantly, choke the lifeblood of a nation by interdicting the movement of goods and resources to include energy and information. But sea power can do little to fundamentally affect the outcome of land operations (especially in the short term), nor can it control terrain or people.

In any given year, the United States typically does not need to deploy a large-scale land force. Yet throughout its history, it has consistently needed to do so every 15-20 years. There is no indication that this pattern is likely to change. This should be at the core of the U.S. Army’s thinking, and the foundational theme in its engagement with Congress and the American people.

Another example of muddled thinking is the matter of technological churn and the disruptive fixation it obtains in nearly every sector of the national security community. In military affairs, most discussions about technology prove to be  little more than wasteful distractions, enthralling people, capturing their attention and consuming resources, without serving a practical purpose.

Yes, technology in the broadest sense does shape warfare, enabling forces to change battlefield conditions. But technology does not apply evenly to all aspects of military affairs, certainly not temporally.

Yes, we see high rates of technological change in the civilian world, but the areas of change (computers, cellphones, data processing, etc.) are largely consumable and comparatively inexpensive. Yet a ship lasts for thirty-five years or more, as can a plane. Tanks, artillery pieces, cargo vehicles, heavy engineer equipment, and such easily last twenty years or more. The bulk of defense spending goes toward large, principle-end items that do not turnover quickly at all. Consequently, the extraordinary amount of time and attention spent debating the need to embrace innovation and advanced technology is disproportionate to the physical and fiscal realities of fielding effective combat power.

The Defense Department and those who analyze and comment on defense matters tend to lose sight of this. There is an unrealistic expectation that metrics and conditions found in the commercial world are directly applicable to the world of military affairs and combat operations. This leads to a constant drumbeat of commentary warning that the military services are innovatively moribund. Nothing could be further from the truth, and the services should more aggressively push back against such nonsensical criticism.

Yes, the military must be tech-savvy and must always look for competitive advantages. The history of warfare is replete with examples of technological advances driven by military necessity, finding solutions to the most difficult real-world problems. But it does not naturally follow that the civilian world in which advanced technologies are pursued can be neatly overlaid onto the world in which men and machines do battle with enemy forces on distant shores. In combat environments, the enemy is constantly seeking creative ways to destroy supply points and transportation assets, interdict the flow of resources, compromise critical communications networks, and systematically kill personnel at an industrial scale—conditions not found in the commercial sector.

Interestingly, one finds a similar phenomenon occurring in reverse where battlefield heroes share their hard-earned lessons in leadership, organizational management, and operational success with the world of business. On one hand there is merit in sharing leadership methods, management techniques, and the value of sound principles like taking care of your people, maintaining focus on your mission, exercising discipline in your decisions and prioritization of resource allocation. But how those are applied is profoundly influenced by the context of one’s “battlespace,” which differs dramatically between the worlds of military, business, government, and social/civic affairs. Conflating the worlds of business and military affairs ignores the realities of both and sets-up unrealistic expectations about what one can do for the other.

It is one thing to develop a policy that aims to bring an eighth century culture into the twenty-first century. It’s quite another thing to actually do it. The cottage industry of counterinsurgency, human terrain, and nation-building experts that emerged during our long sojourn in Iraq and Afghanistan is another example of wishful thinking trumping reality. Walter Russell Mead has an excellent article on this in the latest issue of The American Interest, and it merits serious reading and reflection.

General purpose, conventional military forces are a blunt instrument populated largely by young men between the ages of eighteen and twenty-four years. Their time assigned to a particular military task in a theater of operations is measured in months, and any hand-over to a replacing unit cannot help but disrupt ongoing efforts as the new guys come up to speed with the local context.