The Real Problem with Obama's State of the Union Address 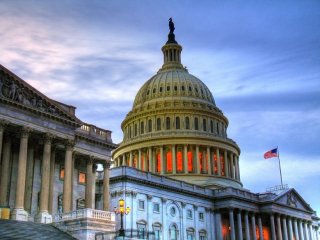 “Nobody shoots at Santa Claus.” Al Smith’s jibe at FDR came to mind as I listened to President Obama’s laundry list of free stuff in the State of the Union speech.

The laundry list could have been worse. Cato Institute researchers counted 104 separate proposals in President Clinton’s 2000 address. I didn’t have the patience to count last night, but I’m sure there were fewer. There were some big tickets there, though, from tax hikes to free college.

As a libertarian, of course, I’d like to hear something like, oh, “the era of big government is over.” And maybe a program of economic freedom, civil liberties and peace.

Instead, we got a sweeping vision of a federal government that takes care of us from childhood to retirement, a verbal counterpart to the Obama campaign’s internet ad about “Julia,” the cartoon character who has no family, friends, church or community and depends on government help throughout her life. The president chronicled a government that provides us with student loans, healthcare, oil and the Internet.

The spirit of American independence, of free people pursuing their dreams in a free economy, was entirely absent. Indeed, the word “freedom” appeared only once in the speech.

Obama prefers words such as “together” and “one people.” It’s common for political leaders to use such language, and then to present themselves as the embodiment of the nation, so that criticism of the official or his policies is divisive and unpatriotic.

Barney Frank memorably said, “Government is simply the name we give to the things we choose to do together.” But I didn’t choose to invade Iraq. Or to saddle the country with $18 trillion in public debt. Coercion, collectivism and bureaucracy are poor tools for decision making and progress.

The highest-profile item in the speech was a proposed $320 billion tax increase (over ten years), introduced rather evasively as “let’s close the loopholes that lead to inequality by allowing the top one percent to avoid paying taxes on their accumulated wealth.”

The president wants more and better jobs. And yet he wants to raise taxes on the savings and investment that produce economic growth and better jobs. And he proposes a higher minimum wage, which would cost some low-skilled workers their jobs. Those proposals are not well thought out.

Speaking of doing things together: If he wants to reach across the aisle and work with Republicans, why not work together on a tax-reform plan that would bring down the world’s highest corporate tax rate and eliminate loopholes? Why derail bipartisan cooperation on immigration by unilateral executive action?

The president spoke a lot about the future. He mentioned Social Security, Medicare and Medicaid. And he twice boasted of shrinking deficits. But he never addressed the elephant in the room: The deficit is about to head back up, reaching $1 trillion in a few years. The national debt is $18 trillion and still growing. Worse, those entitlements programs have an unfunded liability of around $90 trillion. What’s his plan to avert an unprecedented financial crisis a few years after he leaves office? He didn’t say, because he has no plan.

When he turned from economics, the president offered a bit more to libertarian-minded voters. He said that we don’t want to be “dragged into costly conflicts that strain our military and set back our standing” or “dragged into another ground war in the Middle East.” He said that “when the first response to a challenge is to send in our military, then we risk getting drawn into unnecessary conflicts, and neglect the broader strategy we need for a safer, more prosperous world.” Music to noninterventionist and realist ears.

But the reality is somewhat different. He has officially ended the wars in Afghanistan and Iraq, but American troops remain in both countries, which are hardly experiencing postwar tranquility. He has bombed seven countries, three more than President Bush. We are getting more deeply entangled in a new war in Iraq and Syria, without congressional authorization. Obama asked Congress to “pass a resolution to authorize the use of force against ISIL. We need that authority.” Really? He hasn’t shown any need for it these past six months. Nor did he ask for authorization to wage war in Libya. The senator who said in his 2008 campaign, “The President does not have power under the Constitution to unilaterally authorize a military attack in a situation that does not involve stopping an actual or imminent threat to the nation,” has become a president who acts as if he does.

Libertarians applaud the president’s promise to pursue trade agreements. But instead of taking the opportunity to tell a huge audience about the benefits of free trade, he presented trade as an unfortunate necessity and promised that his trade agreements would be less bad than previous agreements. At least he wants to remove the failed embargo against Cuba.

I applaud his desire to work on a bipartisan basis for criminal-justice reform and look forward to more specifics. Since, as he noted, he has no more campaigns to run, and he has demonstrated his willingness to exercise the powers of the office (and then some), perhaps he could start with a more generous use of the pardon power for people serving long prison terms for nonviolent offenses. And why no mention of the growing movement to legalize marijuana?

Finally, I appreciate the president’s inclusiveness in his rhetoric and his policies. In 2013, he paid tribute to “Seneca Falls, and Selma, and Stonewall.” This year he cited gay marriage as “a story of freedom”—indeed, his only mention of freedom—and he touched on the deepest roots of our liberty and our civilization in this passage: “we are a people who value the dignity and worth of every citizen: man and woman, young and old, black and white, Latino and Asian, immigrant and Native American, gay and straight, Americans with mental illness or physical disability.”

In discussing the Cuban embargo, Obama said, “When what you’re doing doesn’t work for 50 years, it’s time to try something new.” How many applications that maxim might have!

To reiterate: “When what you’re doing doesn’t work for 50 years, it’s time to try something new.”

David Boaz is the executive vice president of the Cato Institute and the author of The Libertarian Mind, to be published by Simon & Schuster on February 10.