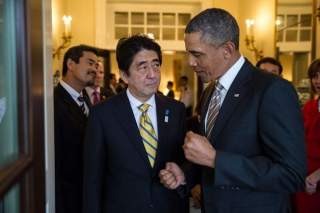 The agreement of the Trans-Pacific Partnership (TPP) is an accomplishment, and there will be benefits, but there is little, if any, reason to cheer at the moment. Estimates of the actual economic benefits vary but hover around 0.5 percent of GDP—cumulatively and over a multiyear period—for the United States. For the United States, the agreement is less about economic growth and more about laying the legal framework for trade in the Asia Pacific, and strengthening U.S. influence on the West Coast of the Western Hemisphere. The agreement excludes both India and China, raising the chances of China further pursues a parallel economic platform to the United States.

China has stated some interest in joining the TPP. But this is likely to only be rhetoric in the near term while China continues to adjust its economy toward consumption. At the moment, joining something like the TPP—with its state owned enterprise reform—could cause shocks that the People’s Bank would struggle to counteract without compromising economic reforms. Not to mention China’s own regional trade accord being negotiated with many of the same signatories to the TPP—the Regional Comprehensive Economic Partnership.

The TPP is part of the current U.S.-based regime, one that China has been challenging with parallel institutions recently. China may view the TPP as too little too late for the United States. China is seeking to become more entrenched in global financial markets through the inclusion of the Renminbi as an official reserve currency. For China, a rules-based trade agreement does not hold nearly the strategic advantage as it does for a developing economy like Vietnam.

The other two strategic economic heavyweights in Asia, India and Japan, likely view this much differently.

India is not involved (yet) in the TPP, and there are numerous reasons, most of which are completely reasonable for a nation that has struggled to keep up with the Chinese juggernaut and is feeling the pressure to reaccelerate growth. Prime Minister Modi has launched programs that are nationalistic and mercantilistic, and Indian participation in the negotiations would have raised some significant issues around their pharmaceutical industry for example. This was already a topic of heated debate, and an Indian presence at the table would have made it far more awkward.

For India and China, trade losses are likely. But the cumulative effects will be minimal—similar in percentage terms to the United States’ gains. Japan should view the TPP as an opportunity to keep the United States engaged in the Asia Pacific theater as a counterweight to China. And, by being at the table when the rules were written, Japan had the opportunity to level the playing field in its own backyard—one that has not been level, or fair, or free for decades.

For the United States, the goal was not to realize an immediate economic benefit, but to build a durable Western framework. The United States wants to engage with emerging Asia—a strategic and probably profitable place to be in the future—and about the US being present and leading while the rules of trade are set.

The United States was, in a way, bribing the countries to come to the table. After all, there is still some value in having privileged access to the U.S. markets for emerging Asia. And the absence of China and India is an added bonus—since terms of trade will favor them and not China or India. The United States and, to a certain and much lower degree, a less pacifist Japan could also act as an economic counterbalance to China in the region.

The real benefits of the TPP will come down the road if more countries join the framework and trade becomes increasingly liberalized, and as China and India are pressured into moving toward the same standards. China and its leadership will probably not alter the composition of the SOEs for the time being. While China continues to pivot, Xi Jinping et. al. may need the entities in time of crisis. It is highly unlikely that China will join the TPP in the near-term, though it is likely to adopt similar structures over time. Meanwhile, India is undergoing its greatest transformation in recent memory. Modi would be unwise to make any move that risks harming the economy.

The TPP is more political than anything for the United States. With so little to gain in terms of growth, the United States is gambling that it can play a role in more substantive future trade negotiations with China and India. The TPP is an investment in the long-term liberalization of trade. The United States is too big to benefit from the deal involving too many friends and too few real changes to the global economic regime—yet.