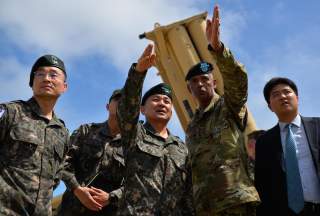 This month, the new president of South Korea, Moon Jae-in, declared that American missile defense in South Korea must wait out yet another round of delays. The United States military has sought for years to install a high-altitude missile defense system in South Korea. The South Korean government dragged its feet for fear of provoking China, which has objected. Yet years of outreach by United States and South Korean officials—on the Track 1, 1.5 and 2 levels—went unheeded. No matter the solicitation, China turned it down. Eventually, the government of now-impeached ex-President Park Geun-hye chose to accept the Terminal High Altitude Area Defense (THAAD) system in mid-2016. The system is now partially installed.

The Chinese response was to slap an informal economic embargo on South Korea. As South Korea’s largest export destination, this hurt local producers, leading to pushback. Politicians on the left also argued that THAAD was unnecessary. They said it was overkill for North Korea’s limited missile program and that it did not block the likely vector North Korea would use to strike South Korea. North Koreans, as a fellow Korean people, would never use nuclear weapons against South Korea.

Hence when liberal Moon took the presidency, there was considerable impetus to halt or slow the deployment. And this summer Moon has thrown up two roadblocks to deployment—legislative approval and an environmental assessment. The response has been widespread skepticism of these objections. As in most democracies, the commander-in-chief has wide latitude to make national-defense decisions at his/her discretion. President Park did not obtain National Assembly approval for THAAD last year. Nor is there obvious precedent demanding that. Even more implausible is the environmental objection. Presumably American operators and builders of this system would have long since been exposed to dangerous levels of whatever toxins the president fears.

These objections are so transparent that much of the conservative media has identified them as what they almost certainly are—delaying tactics as a sop to China. They buy Moon time to find a technicality to roll THAAD out if indeed he wants to push that far. That still seems unlikely. Moon only won with 41 percent of the vote and would facing punishing criticism in the media for knuckling under to China if he expelled THAAD. But Moon’s awkward dilemma between China and the United States on this issue captures what is likely the biggest challenge for South Korean grand strategy in the future—avoiding an open, zero-sum choice between the United States and China.

What THAAD Does and Does Not Do

THAAD captures this problem well, because China’s objections are almost certainly not technical. THAAD does not impinge on China’s strategic deterrent against the United States. Its anti-missile rockets do not have the range for that. THAAD also does not give America any new intelligence, surveillance, reconnaissance (ISR) capabilities to observe China. The United States already has excellent satellite coverage of China and would rapidly detect a Chinese missile launch. THAAD’s X-band radar, about which so much fuss has been made, does not point into China. Unlike an I-band radar (the sort one sees at airports or in the movies), the X-band does not rotate 360 degrees, generating imagery of China. Rather it projects northward, as its intended target is North Korea.

Chinese (and Russian) objections that it might then penetrate into northeastern China (or the Russian far east) are also specious. The curvature of the earth means that the X-band signal begins to peel away from the earth after several hundred miles, so coverage north of North Korea is limited too. As its name implies, THAAD is a defensive system. It is designed to shoot down incoming missiles as they approach a target. Unless China, or Russia, intend to strike South Korea or Japanese cities, there is no threat to them. Repeating all this, however, is almost besides the point now. The Chinese (and the Russians) know this. Beijing had ample years before the Park deployment decision last summer to raise technical concerns. It forewent all such opportunities. This strongly suggests a political motive, which Moon’s transparently phony excuses to drag out deployment only further verify.

So once again, THAAD is victim to South Korea’s tough position between the United States and China. As China rises, it exerts pressure on its neighboring states, as most large, expanding states do in their locality. Beijing can mask such pressure in bogus technical language—suggesting that THAAD peers into China, or that South Korean imports suddenly require new health and safety inspection—but these are obvious fakeries. And indeed, Beijing may want them to be flimsy enough so that South Korean elites can actually see the steel in the glove.

Beijing’s real objection, of course, is the deepening of the South Korea–U.S. alliance, which THAAD represents. THAAD is technically confusing enough that muddying the waters on it masks an open Chinese power-play, but to those who understand THAAD, Beijing’s objections are shallow enough for the real message to come through: that South Korea should not further its military relationship with the United States.

This sort of decision point, or fork, is almost certain to recur with greater frequency for South Korea. China is growing relative to the United States. As the gap between them diminishes, pressure will rise on China’s neighbors. South Korea’s ability to walk between the raindrops—to find political spaces congenial to both the United States and China—will invariably contract. THAAD and the Moon government’s decision to once again get on the deploy-or-not merry-go-round is only the beginning. Tussles like this will become a defining feature of South Korean foreign policy.