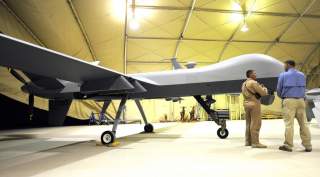 The latest internal report estimates the cost of President Trump’s southern border wall at $22 billion. For an administration priding itself on the “art of the deal” and fiscal responsibility, this is not welcome news.

Yet the president promised to build a wall. Should he push ahead? Thankfully (for the president and the American taxpayer), technology offers a better way to make our southern border more secure: drones.

Drones are already a key component of the U.S. Border Patrol’s efforts to build a “virtual wall.” First deployed in 2005, unarmed Predator drones can fly twenty-hour missions and reach speeds of 275 mph, extending surveillance over the most remote parts of the border. Nine drones already fly several thousand hours a year. Procuring more drones and additional funding for flight hours will harness the full potential of technology to secure the border.

Drones enable the Border Patrol to concentrate its resources. Most deployments record video that is carefully compared to past flights, identifying changes in terrain to signal cross-border traffic. Agents can then be dispatched to follow up on new trails and install new sensors. Gaps in security are closed. Remote areas with no traffic are justifiably ignored, saving the agency valuable time and resources. Concentration of force is a basic security principle—let’s apply it to the border.

A physical wall, once built, cannot be redeployed or adjusted, but drones can. As circumstances change, drones can be sent to the northern border, upgraded with the latest sensors and equipment, or even sold when no longer useful. Mountains, oceans and swamps alike pass easily beneath their cameras. In the past, the Border Patrol has even allowed its drones to assist in search-and-rescue efforts and disaster relief. Drones provide a flexible response to an ever-changing threat.

Most importantly, drones are cheap. Each drone costs about $20 million and each hour of operation costs $12,000. That may seem extravagant, but remember that drones are an alternative to a $22 billion wall. Purchasing five more drones and funding the program for ten thousand flight hours a year will be just 1 percent of the cost of the wall. What’s more, these are proven—not estimated—costs. With delays, overruns and other familiar features of the government contracting landscape, the $22 billion estimate may well be optimistic. The proven track record of the drone program comes in at a fraction of that cost.

Critics will point to the 2014 DHS Inspector General report questioning the effectiveness of the drone program. Yet the report mainly faults the program for failing to live up to its potential—only small stretches of the border are routinely watched, and the goal of sixteen flight hours a day was rarely met. More drones and flight hours will extend the reach of the program and resolve these issues. On the other side of the argument, some say that the border is already secure and more drones are unnecessary. This critique is divorced from our political context: the administration is committed to looking tough on border security. Using more patrol drones gives the administration a political “win” without wasting vast resources. Good policy is politically viable, not perfect.

Will a “virtual wall” solve all our problems on the southern border? Of course not. But unlike a wall, drones are a flexible tool that can adapt to changing circumstances and emerging threats. Building up the drone program will fully exploit American technology to secure the border—and simultaneously save taxpayers billions of dollars. An investment in drones is innovative. It’s an investment American can afford. And it’s an investment that truly will make our southern border more secure.

Jarek Buss is a Pickering Graduate Fellow at the George Washington University. After completing his Masters in Security Policy, he will join the United States Foreign Service as a political officer.