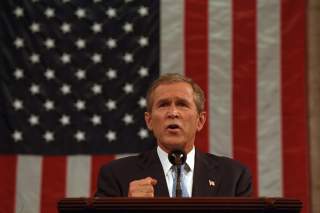 On January 29, 2002, a cobalt-tied George W. Bush ascended to the rostrum in the House of Representatives to address a joint session of Congress for the third time in his young presidency. Nominally his first State of the Union address (a president must be in office for a year to qualify), Bush used it to furnish an update on the war in Afghanistan and offer his notorious warning about a sinister “axis of evil.” He also outlined what he saw as his momentous mission in the years to come.

“History has called America and our allies to action, and it is both our responsibility and our privilege to fight freedom’s fight,” Bush said. The attacks of September 11, he said, were a reminder that Americans have “obligations to each other, to our country and to history.” He rejected the culture of “If it feels good, do it” in favor of “Let’s roll,” the self-abnegating words overheard in the final minutes of Flight 93. “We want to be a nation that serves goals larger than self,” he asserted. “In a single instant,” he continued, “we realized that this will be a decisive decade in the history of liberty, that we’ve been called to a unique role in human events.”

Last night, at that same podium, Donald Trump repudiated Bush’s conception of post-9/11 America. Whereas Bush conceded that war was expensive but said America must pay any cost, Trump bean-counted America’s bill in the Middle East at $6 trillion and said “we could have rebuilt our country twice and maybe even three times.” While Bush viewed the duties of the United States in unabashedly global terms, Trump averred, “My job is not to represent the world. My job is to represent the United States of America.” For Bush, tough military action abroad could usher in a global epoch of liberty; for Trump, internal improvements at home were the key to a “new chapter of American greatness.”

Personified, Bush’s conception of country was an armed and able missionary with a vocation to convert the world to democratic liberalism, in the service of what Andrew Bacevich calls “the Church of America the Redeemer,” which is why his address was replete with words like “serves” and “called.” Trump offered up something more nettled and victimized—a United States that has repeatedly been shaken down by those it has tried to assist, and needs, like an Ayn Rand protagonist, to cast off its nagging supplicants in the single-minded pursuit of its own greatness. That these two visions were presented under the same GOP banner is a testament to how vertiginously our politics can change.

It isn’t just that these were different legs of Ronald Reagan’s conservative stool, a traditionalist speech versus a libertarian speech, for instance. Bush and Trump were antithetical to each other, internationalist guns versus nationalist butter, with even Trump’s pledge to combat radical Islam couched firmly in his country’s interests rather than some abstract stratospheric crusade. It’s undeniable that the latter is a backlash against the former. Trump all but said as much: “I will not allow the mistakes of recent decades past to define the course of our future.” By “mistakes” he meant, among other things, the wars, the Sisyphean nation-building in strange locales, the adrift sense of purpose, all of which sent exasperated voters into Trump’s fold during the last election.

Trump’s first address to a joint session of Congress was a successful one, devoid of the burbling tangents and braying superlatives that so many feared would congest it, charming and poignant. His interaction with the widow of slain Navy SEAL Ryan Owens was unforgettable. He provided the extensive Obamacare repeal blueprint so many Republicans were craving and wasted no time denouncing the recent wave of anti-Semitic threats and vandalism. He looked especially good next to the decrepit Democrats, who hauled out their newest heartthrob, seventy-two-year-old Steve Beshear, a former Kentucky governor.

But it wasn’t the Democrats who were Trump’s real target, it was the global Republican evangelism espoused by Bush that for so many has brought only interminable war and economic decay. “Our responsibility to history is already clear: to answer these attacks and rid the world of evil,” declared George W. Bush after 9/11. We weren’t able to end evil, as it turns out, and our failed attempt to do so is one of the main reasons Donald Trump is president today.