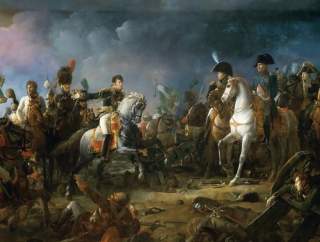 IT SAYS something about the power of historical memory that, 132 years after the dissolution of the Holy Roman Empire, it still exerted a strong emotional pull on the German imagination. So much so that, in the days immediately preceding the Anschluss, Adolf Hitler’s military annexation of Austria on March 12, 1938, a Nazi agent was tasked with preventing Austrian patriots from making off with the coronation regalia of the Holy Roman emperors before the incoming Germans could confiscate it.

Waffen SS Maj. Walter Buch—an early Hitler acolyte, rampant anti-Semite and something of a goofy mystic when it came to Germanic holy relics—checked into a small Viennese hotel incognito. Once the Anschluss was launched, he donned his uniform and, toting a loaded Luger, proceeded to the Kunsthistorisches Museum where the imperial regalia were housed. Like the incoming columns of German troops, Buch encountered no serious Austrian resistance and was able to present his plunder to a gratified Hitler when the führer made his triumphant entry into Vienna.

The trophies were packed off to Nuremberg, which, in its days as a proud imperial city, had housed the crown regalia between coronations of Holy Roman emperors. The same city had become a hotbed of Nazi support and the scene of the mammoth Nuremberg Rallies recorded on film by Leni Riefenstahl. In a final irony, after World War II it would also be the site of the Nuremberg Trials prosecuting Nazi war criminals. Walter Buch, who besides his other Nazi credentials was also Martin Bormann’s father-in-law, would serve time as one of them. In 1949, faced with further charges, he committed suicide. Taking no chances—and with a distinctly Teutonic thoroughness—he slashed his wrists before drowning himself in the Ammersee. Three years earlier, after rescue from a Nazi bunker, the crown regalia had been returned to a once-more independent Austria. With any luck, they have found their permanent resting place there, displayed in the Hofburg Palace, home of the dynasty that ruled the empire for almost all of its last three centuries.

The Holy Roman Empire was the first of three Reichs in German history. The second was the Hohenzollerns’ formidable, Prussian-dominated empire forged by Bismarck out of victory in the Franco-Prussian War. Despite making a newly unified Germany the dominant economic and military power on the European continent, it only lasted from 1871 to 1918. The third German Empire, Hitler’s vaunted “Thousand-Year Reich,” enjoyed an even shorter run, from 1933 to 1945. There had, however, been a real Thousand-Year Reich. The Holy Roman Empire, constantly ebbing, flowing and morphing in size, shape and composition, occupied the heart of Europe from 800 to 1806, a millennium spanning from the Age of Charlemagne to the Age of Napoleon. Old enough to predate any of Europe’s modern nation-states, in some of its most important aspects it foreshadowed the ideals, if not the realities, of today’s European Union.

AFTER A long period of historical neglect, of treatment as an extinct specimen from a distant and irrelevant past, the empire has finally found a modern chronicler to do it justice and bring it back to life for contemporary readers. Peter H. Wilson, Chichele Professor of the History of War at the University of Oxford, has produced a magisterial work that tackles a complex subject with both erudition and lucidity, a combination of qualities that few academic historians manage to balance. The result is a big book but not a heavy one. Heart of Europe has almost as many pages as its subject’s lifespan, including 686 pages of central text, extensively detailed notes, a glossary, a chronology, appendices, imperial genealogies, thirty-five illustrations and twenty-two maps. Each of the maps, if not the pictures, is worth a thousand words, graphically depicting in black and white—and many appropriate gray areas—the amoeba-like changes in boundaries, the rise and fall of dynastic influences, and the shifting hubs of power in the European heartland.

It’s a massive book for a massive subject. As Professor Wilson explains in his introduction, understanding the history of the Holy Roman Empire “explains how much of the [European] continent developed between the early Middle Ages and the nineteenth century,” and reveals “important aspects which have become obscured by the more familiar story of European history as that of separate nation states.” Moreover, he writes,

The Empire lasted . . . well over twice as long as imperial Rome itself, and encompassed much of the continent. In addition to present-day Germany, it included all or part of ten other modern countries: Austria, Belgium, the Czech Republic, Denmark, France, Italy, Luxembourg, the Netherlands, Poland and Switzerland. Others were also linked to it, like Hungary, Spain and Sweden, or involved in its history in often forgotten ways. . . . More fundamentally, the east-west and north-south tensions in Europe both intersect in the old core lands of the Empire between the Rhine, Elbe and Oder rivers and the Alps. These tensions were reflected in the fluidity of the Empire’s borders and the patchwork character of its internal subdivisions.

He concludes, “The Empire’s history is not merely part of numerous distinct national histories, but lies at the heart of the continent’s general development.” This is especially true on the cultural plane. Because the core of the empire in what became modern Germany was divided into so many semisovereign principalities—still over three hundred of them in its final years, ranging in size from tiny imperial estates to large-scale princely and royal domains with formidable armies and financial resources such as Bavaria, Saxony and Prussia—the imperial landscape teemed with independent universities, independent centers of cultural patronage, and independent bases for crafts and commerce. The result was a centuries-long, mostly peaceful competition that produced magnificent music, scholarship, jurisprudence, art, architecture and technological progress; Goethe’s poetry and philosophy, Gutenberg’s printing press, and the myriad compositions of the Bachs, Mozarts and countless lesser masters spring to mind.

To this day, the central European landscape is checkered with former princely capitals as large as Munich and Dresden or as small as a provincial backwater like Bayreuth, where each German princeling sponsored his own theater, opera house, art collection and often a university as well. The same was true of the great Baltic trading ports of the Hanseatic League. Each developed a wealthy patrician merchant class with its own tradition of cultural patronage, not unlike that of the aristocratic Venetian Republic in its golden age.

The saga of the Holy Roman Empire begins and ends with the coronations of two extraordinary men: Charlemagne and Napoleon. Charlemagne, a Frankish warrior king who could neither read nor write, but who surrounded himself with learned churchmen and was able to speak several languages, had long dreamed of uniting and expanding Christian Europe under a central monarchy, a successor state to the Roman Empire. By 800 he had conquered much of central and western Europe and had made several visits to Rome, cultivating a role as protector of the mother church. The contemporary pope, Leo III, was, to put it mildly, less than universally popular with the populace. As described in The Oxford Dictionary of Popes,

On 25 April 799, as he was riding in procession to mass, a gang violently attacked him, attempting without success to cut out his eyes and tongue; after a formal ceremony of deposition he was shut up in a monastery. Helped by friends, however, he made his escape to . . . [Charlemagne], at Paderborn, who received him with solemn courtesy.

Each man had something to offer the other. Charlemagne had the armed power to restore Leo to the papacy. And Leo, as pope, was uniquely empowered to recognize Charlemagne as the new Roman emperor, the paramount monarch of Christendom, and in that sense a holy Roman emperor. After some hesitation—and quite probably some astute horse trading on both sides—Charlemagne restored Leo as pope. The favor was returned on Christmas Day, 800.

As the Christmas mass was beginning and [Charlemagne] rose from praying before St. Peter’s tomb, the pope placed an imperial crown on his head; the assembled crowd acclaimed him emperor, and Leo knelt in homage (the first and last obeisance a pope was to offer a western emperor). In spite of the chronicler Einhard’s report that the coronation came as an unwelcome surprise to [Charlemagne], everything indicates that the ceremony . . . had been carefully prearranged.

Charlemagne died in 814 and by 843 warring descendants had divided his empire into three kingdoms, with further splintering to follow. But the imperial title and concept survived as, over time, emperor succeeded emperor and dynasty succeeded dynasty, often with imperial claims to temporal power conflicting with papal claims to spiritual supremacy.

Through it all, the region we now think of as Germany, along with peripheral territories in parts of Italy, Burgundy and modern-day Netherlands, developed thriving economies and cultural lives under the relative stability of the imperial umbrella. Over the years an electoral system evolved, standardized by the so-called Papal Golden Bull of 1356. Henceforth, emperors would be chosen by an electoral college consisting of designated electors from a handful of powerful ecclesiastic and secular rulers within the empire. In theory, any prince of the empire could be elected emperor—just as, in theory, any child born in present-day America could grow up to be president. In practice, the title usually fell to one of the more powerful rulers within the empire and tended to be passed on to other members of the same dynasty for extended periods. This made perfect sense at the time since, as Professor Wilson points out,