The Real Threat to America's Military (And It's Not China, Russia or Iran) 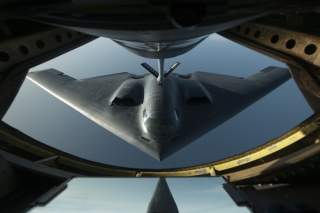 What should replace the Air Force? Perhaps we’re getting ahead of ourselves.

In Grounded: The Case for Abolishing the United States Air Force, I argued that America should disband the United States Air Force and disperse its assets across the remaining three services.  I won’t recap that argument in this space, but suffice to say that the current constellation of U.S. military bureaucracy is bad for procurement, bad for inter-service conflict, bad for strategic planning and bad for warfighting.

As Bryan McGrath has observed, the fundamental problem with American procurement and strategic planning, at this point, lies in our inability to think beyond the static division of resources between the four services. While Bernie Sanders supporters often decry the unwillingness of the United States to shift military spending towards social services, we remain far more capable of exchanging strategic bombers or aircraft carriers for schools, than for each other. We can reallocate resources within services, or allocate resources away from the military, but we cannot reallocate resources across services.  And this is the foundation of strategic disaster.

But What Comes Next?

Figuring out how to replace the Air Force requires a thorough rethinking of how we conceptualize military bureaucracy. By extension, this requires giving how we’ve organized our bureaucracy in the past a bit of attention. The most common justification for the current constellation of military services relies on domain specificity. Warfare on land, at sea and in the air differs sufficiently that we require specialized organizations to operate in each domain.

The justification that won the Air Force its independence in 1947 revolved around mission independence. Briefly, a service became a service if it could plausibly plan and execute a decisive military campaign independent of other services. Air Force independence, thus, was tied to the idea that independent airpower could win wars decisively, a claim central to the arguments of interwar airpower enthusiasts. This, too, was a bit of a crock; everyone tried to forget that the Army, at least, would require the support of the Air Force to do its job, and much unnecessary grief ensued in Korea and Vietnam.

In short, both of the primary ways in which we’ve justified our military bureaucracy shortchange the idea of “jointness,” the reality that modern military operations (at least since 1911) almost invariably require the collaboration of air and surface assets.  Destructive inter-service conflict inevitably resulted.

So what would happen if we thought beyond this kind of distinction, and tried to develop coherent services designed to enhance strategic thought, rather than obstruct it? The United States military has, in effect, two jobs.  The first is to fight and win wars, and the second is to strategically shape the world in favor of American interests.  These jobs overlap to a great extent, but they are also in many ways distinct from one another.

The “fighting” service (let’s call it the “United States Army”) would focus on tactical and operational excellence in air and land warfare, and in sea warfare to the extent which air and land assets (including such weapons as ground launched cruise missiles, and aircraft specialized for anti-sea missions) influence war at sea. This service would include the assets that have traditionally found a home within the US Army, as well as those assets most associated with the “tactical” side of the US Air Force.  Missions tasked to this force would include seizure and holding of territory, the destruction of enemy military forces, air superiority and suppression of enemy air defenses, and counter-insurgency.

The “strategic” service (let’s call it the “United States Navy”) would concentrate on shaping the various global commons in a manner strategically advantageous to the national interests of the United States.  Missions would include facilitating global trade, protecting US access to air and space, and maintaining the US nuclear deterrent. This service would operate assets traditionally associated with the US Navy, as well as the strategic forces currently within the US Air Force, and a rump ground force optimized for amphibious operations (akin to, but probably smaller than, the current US Marine Corps).

Such a structure would inevitably create inter-service conflict; overlapping jurisdictions, disagreements about joint requirements, divergent procurement priorities, and general messiness.  An effective fighting service undoubtedly has strategic impact, and a strategic force often needs to fight. But the current structure generates these problems, too, and doesn’t seem to offer any long-term solutions. The proposed structure gives us tools for thinking about how to innovate, how to allocate resources, and how to plan for the future, without baking destructive internecine conflict into the pie.

In 1947 the United States completely redesigned its military institutions. Unfortunately, it did so poorly, without sufficient thought as to the implications of the lines drawn between capabilities.  The next decade, while the United States still holds presumptive military advantage over any potential adversary, is the last, best chance for military reform. It’s time to start thinking about what the next Department of Defense should look like.