The Real Ukraine Crisis Is Coming: The "Day After" Dilemma 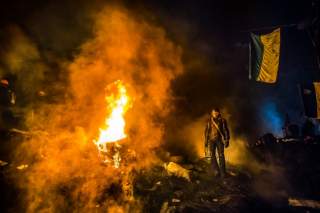 As NATO’s Wales Summit approaches—and Russia’s support for Ukrainian separatists grows—the Obama administration and U.S. allies face increasing pressure to act.  Most attractive are the simple-sounding solutions, like additional sanctions against Russia or military assistance to Ukraine. Unfortunately, commendable and appropriate desires to deter Moscow and help Kyiv in the short-term are obscuring some unfortunate realities and some painful lessons from other civil wars.  The bottom line is that even if Moscow allows Ukraine’s military to defeat the separatists—an outcome that does not seem likely at this point—finding a sustainable solution will be costly and quite difficult.

Ukraine’s weak economy gets worse with every day the fighting continues.  Ukraine’s economic problems will be very expensive and challenging to fix in the best of circumstances; even before Viktor Yanukovych’s ouster, Russia’s annexation of Crimea, and the bloody fighting in and around Donetsk and Luhansk, Ukraine was an economic basket case.  For over two decades, the country’s political elites were content dividing and re-dividing the spoils of Ukraine’s largely unreformed economy rather than making tough choices.  The results included high foreign debt and deficits, failed international assistance plans, vulnerability to external economic leverage, a largely paper military, and public resentment.

What will this look like when the current conflict eventually ends?  Let’s take the best case and assume that current U.S. and Western policies succeed—Moscow gives in, abandons the separatists and allows Ukraine’s military and militias to defeat them quickly.  Kyiv’s agenda on the morning after highlights just how bad Ukraine’s situation really is.

In this most favorable of futures, Ukraine will add the reconstruction of the Donetsk and Luhansk regions to its existing economic burdens.  Prime Minister Arseniy Yatseniuk has already acknowledged that this will cost “billions of dollars.”  He has directly accused Russia of directing the separatist forces to destroy infrastructure in the region to “strangle” Ukraine’s economy.  According to Ukrinform, Ukraine’s state media service, Yatseniuk said that the separatists are destroying “mines, power plants, electrical grids, railways, bridges and communications.”  Ukrainian government forces have done great damage too.  And Apartments, houses, schools, shops and hospitals are also in ruins.

Beyond its considerable economic cost, the mounting destruction in eastern Ukraine is significant in two other respects.  First, it may well be among the strongest deterrents of any Russian effort to annex the region—taking into account that Moscow has had to allocate about $14 billion over the next five years to integrate Crimea (excluding a $6 billion bridge to connect it to Russia), why would the Kremlin want to pay for any new territory?  The Donetsk and Luhansk regions together had over two times Crimea’s population at the beginning of the year, have relied heavily on old-style heavy industry with all its expensive problems, and are in much worse shape today than Crimea was.  Mr. Yatseniuk’s charges, if true, only add to the price.

Second, rebuilding eastern Ukraine will be not only an economic task for the Kyiv government but a political one.  Finding billions of dollars to rebuild will be quite difficult.  Will the United States or the European Union provide assistance on this scale to benefit what our politicians and media have described as pro-Russian separatist communities in eastern Ukraine?  Will voters in western and central Ukraine accept higher taxes, reduced benefits and other economic austerity measures to build new apartments for returning pro-Russian refugees when they live in crumbling apartment blocks themselves?  The World Bank and the International Monetary Fund can’t magically resolve this either—new loans will mean new debts and new payments for Ukraine’s strained budget.  Mr. Yatseniuk is already looking for tax increases targeting the upper middle class and politically powerful Ukraine’s oligarchs.  Will they pay up?

Setting aside reconstruction costs, do Western policymakers really think that if the Kremlin abandons the separatists it will simultaneously order Gazprom to sell natural gas to Ukraine at anything other than European-level prices?  What additional pressure could the United States and the European Union apply to attempt to force this outcome?  Buying gas at European prices will cost billions as well.  And how much of the Ukraine-Russia economic relationship would survive?  Mr. Yatseniuk has estimated that severing ties could cost Ukraine up to $7 billion in the first year alone.  This may disproportionately affect industrial cities in eastern and southern Ukraine where the country’s Russian-speaking population is concentrated.

If this is not enough, a post-conflict Ukraine will have to manage demobilization of pro-government militias and separatist forces, return and resettlement of hundreds of thousands of refugees who have fled westward or eastward, reintegration—particularly for separatist fighters, who may not be able to return to jobs in destroyed workplaces (unless Kyiv plans to imprison all of them and then to provide for their families), and reconciliation.  Handled poorly, this process could actually exacerbate tensions elsewhere in Ukraine—especially if Moscow lends a helping hand.

Notwithstanding President Barack Obama’s “deliberate” approach to foreign policy, and his frequent criticism of his predecessor George W. Bush, he and his administration do not appear to have thought through the “the day after” in Ukraine or its implications for policy before we get there.  Mr. Obama has already acknowledged that the White House does not “have a strategy yet” to deal with the Islamic State.  Does he have one for anything else?