The Real U.S.-China War Asia Should Worry About: The "Range War" 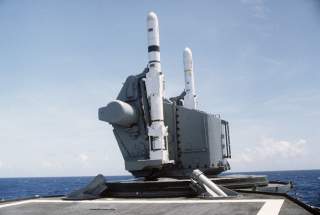 The United States Fights Back

Absent a response by the United States, China’s military planners and policymakers could come to believe that they would have the military tools to suppress U.S. airbases in the western Pacific and threaten U.S. aircraft carriers and other surface ships before they could come in range of Chinese targets. Such a perception would make a future crisis in the region highly dangerous. The U.S. has responded with a few initiatives designed to add more range to U.S. forces.

The U.S. Air Force is acquiring the Joint Air-Surface Standoff Missile–Extended Range (JASSM-ER), a smart stealthy air-launched cruise missile with a range over 900 kilometers. JASSM-ER can receive targeting updates in flight, can be programmed to autonomously search for particular targets, and can precisely strike fixed and relocating aim points. The Air Force intends to arm all of its strike aircraft with the missile, although JASSM-ER is too large to fit in the F-35 Joint Strike Fighter’s internal weapons bay, a requirement for the attack plane’s stealthy flight.

Realizing the legacy Harpoon ASCM has now been outclassed by several Chinese models, the U.S. Navy is adapting JASSM-ER to serve as its new Long Range Anti-Ship Missile (LRASM). Should LRASM retain JASSM-ER’s range, it would have over seven times the range of Harpoon and leapfrog over its Chinese ASCM competition. The Navy has launched LRASM prototypes from one of its standard surface ship launchers and from an aircraft, where the missile’s sensors successfully discriminated from several ships in an underway formation to attack the intended target. U.S. aircraft and warships armed with long-range JASSM-ER and LRASM missiles might be able to engage in fights from which they were previously excluded, a development that would presumably cause Chinese military planners to recalculate their assumptions.

The Navy is also taking steps to extend the range and capabilities of the defenses that protect its aircraft carrier strike groups from air and missile attack. These measures, which include integrating new aircraft, radars, missiles, and software, are a response to the increasingly dangerous antiship missile threats.

Yet in spite of these stepped-up ship defenses, Pentagon officials and policymakers are not wholly confident that even the most heavily defended aircraft carrier strike groups will be able to “stand their ground” everywhere. Thus, a debate is now raging inside the Pentagon and the Congress over how aggressive the Navy should be with the design of its forthcoming unmanned aircraft carrier-launched surveillance and strike aircraft (UCLASS). Perhaps chastened by the severe schedule and cost overruns suffered by the F-35 Joint Strike Fighter program, Navy and top Pentagon officials apparently prefer to limit the new robotic aircraft to mainly patrolling the skies near a carrier strike group at sea. Others, now acknowledging the substantial missile threat now menacing U.S. surface ships, are pleading for a smart stealthy robotic strike aircraft that can launch from beyond the range of enemy missiles and then fly very long distances into heavily defended airspace, autonomously finding and attacking selected targets.

If successful, such a robotic strike aircraft will sustain the relevance of U.S. aircraft carriers by greatly extending the reach of the carrier air wing, thus keeping the ship out of enemy missile range. Advocates of the smart, stealthy, and autonomous UCLASS reason that the U.S. has made a huge investment in its aircraft carriers and the surface ships that support them and that the carrier air wing needs to adapt for the future, as it always has in the past. By contrast the more cautious officials inside the Navy and the Pentagon seem highly concerned with the technical and cost risks associated with developing such a leap-ahead robotic aircraft. They likely fear that another development debacle like the F-35 could result in the cancellation of UCLASS, which would leave the Navy far worse off than if it tried only the more modest robotic surveillance aircraft first.

We can be certain that there will be more moves in the range war. For example, once China has proven the DF-21D anti-ship ballistic missile system (China has apparently not yet actually tested the missile and its maneuvering warhead against a moving target at sea), it seems reasonable to assume that Chinese engineers will adapt the maneuvering warhead and its sensors to an intermediate-range ballistic missile, with a range two or three times longer than the 1,500-kilometer range of the DF-21D. If successful, such a capability would allow China to attack moving ships east of Guam, south of Indonesia, and deep into the Indian Ocean.

We should also expect China to extend the range of its aircraft and cruise missiles. China’s large stealthy J-20 strike fighter, now under development, it thought to have a combat radius of 2,000 kilometers. Should China’s engineers eventually develop a cruise missile like JASSM-ER, a reasonable presumption given their track record, China might again leapfrog ahead with its ability to deliver stealthy strikes against mobile land and naval targets at ranges approaching 3,000 kilometers.

So Who’s Winning the Range War?

The Pentagon’s Air-Sea Battle concept (ASB) has been developed to organize a coordinated response to long range anti-access capabilities China and other potential adversaries are fielding. The concept is thought to rely mostly on direct military action to thwart an adversary’s access-denial military capabilities. In the case of China, critics of ASB assert the concept is incoherent, contains dangerous escalation risks, and recommend instead a distant blockade, implemented by U.S. naval power outside the reach of China’s weapons, as an alternative course of action.