The Real U.S.-Iran Dilemma: What Happens After a Nuclear Deal? 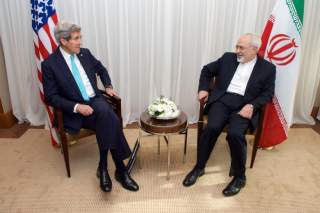 There is a fierce debate in both the United States and Iran about the possible implications of a nuclear agreement for broader relations between the two states after thirty-five years of conflict. Optimists argue that a breakthrough could lead to extensive coordination on regional issues—most notably in working together to combat the common threat posed by ISIS. Pessimists counter that opposing interests will continue to lead to, and could even deepen, competition and conflict between Iran and the United States after an agreement.

The reality likely lies somewhere in the middle. If Iran and the P5+1 can successfully negotiate a nuclear agreement, there will indeed be a historic opportunity to improve communications and cooperate on areas of common interest such as maritime security and Afghanistan. However, cooperation in fighting ISIS beyond basic de-confliction of military operations is unlikely to yield positive results and could actually hurt U.S. efforts by alienating key Arab partners.

Iraq and Syria: The Wrong Venues for Partnership

While the United States and Iran have a common enemy in ISIS, they support very different players both in Iraq and especially in Syria. Tehran has supported and provided huge amounts of money, fighters, training and weaponry to Lebanese Hezbollah, the Assad regime, Shia militia and Islamist parties in Iraq. With so much Iranian blood and treasure spent in Syria and Iraq, it is unlikely that a nuclear agreement would change Iran’s calculus for supporting these actors, which primarily stems from its own desire to exert greater influence in the region.

Moreover, the challenge of fostering inclusive governance will exacerbate the differences in each country’s respective visions for Iraq. The United States believes long-term stability must come through inclusive governance that allows for representation for Sunnis and Kurds, along with the Shia majority. Iran has long taken the opposite approach, preferring to view Iraq through the lens of the sectarian proxy wars in the region. Despite its recent acquiescence to the government of Haider al-Abadi, who thus far seems more inclusive than his predecessor, Nouri al-Maliki, the Iranians will likely continue to pursue a policy more geared towards Shia dominance than genuine power sharing.

Another practical challenge for U.S.-Iranian cooperation in Iraq and Syria is that for the foreseeable future, the Qods Force, the expeditionary arm of the Revolutionary Guards led by Qassem Soleimani, will maintain primary responsibility for these policy areas. It is highly unlikely, even in the aftermath of a deal, that the more moderate elements led by President Hassan Rouhani and Foreign Minister Javad Zarif could wrestle away control of this portfolio. Soleimani, with the clear support of Supreme Leader Ali Khamenei, has led implementation of Iranian foreign policy in Iraq since the U.S. invasion in 2003 and in Syria since the start of the revolt in 2011. Soleimani operates as a practical hardliner grizzled by years of low-intensity conflict across the Middle East, not as an ideologue. Still, it is hard to envision a scenario where the United States can develop a cooperative relationship with a man whose efforts to support Shia groups in Iraq were ultimately responsible for hundreds of American fatalities, and who has directly armed and supported a regime in Syria responsible for approximately 200,000 civilian deaths.

Strong cooperation with Iran on ISIS is also likely to alienate key Arab allies. The long-standing rivalry between Saudi Arabia and Iran has become even more intense in the context of the upheaval in the Middle East over the past few years and Saudi-Iranian proxy struggles in Syria, Iraq, Lebanon, Bahrain and Yemen. Close collaboration with Iran in Syria or Iraq would likely be seen by the Saudis and other Gulf partners as a betrayal that could cause them to walk away from the coalition or at the very least hedge their bets by increasing support for Sunni extremist groups opposed to Tehran, but also U.S. interests.

Improve Communications and Look to the Sea and the East

Even though the conflict with ISIS does not represent the right vehicle for U.S.-Iranian coordination, that does not mean the aftermath of a nuclear deal will lack real and historic opportunities to improve relations. Rather than pursuing an ill-advised partnership on an issue like Syria, where too many obstacles stand in the way of productive collaboration, the United States should instead focus on improving communication and seeking cooperation on less politically charged issues where moderates and technocrats in Tehran are more likely to control the policy.

As a first step, both sides should maintain, formalize and expand communications channels established during the nuclear talks. One of the biggest challenges to cooperation has been that, because the United States does not have diplomatic relations with Iran, communications are almost impossible. That lack of communication channels presents tremendous logistical hurdles and has meant that traditionally when the two sides want to exchange messages, they have to use go-betweens such as the Sultan of Oman or the Swiss who formally represent U.S. interests in Tehran. This game of “telephone” reduces both sides’ ability to understand each other and turns any form of communication, no matter how mundane, into a political act.

Thanks to the nuclear negotiations, now, for the first time since the 1979 Islamic Revolution, there is regular communication between the American Secretary of State and his Iranian counterpart. In the aftermath of an agreement, the United States should expand on those channels at professional levels by gradually lifting the no-contact policy, which requires any U.S. personnel to seek a special high-level exemption before interacting with their Iranian counterparts.

Iran and the United States should also look to expand military-to-military communications to de-conflict operations and avoid accidents that could lead to unintended escalation across a number of areas where the two militaries operate. These include naval operations in the Gulf, North Arabian Sea and Red Sea, and air and special operations forces in Iraq. Specifically in the naval realm, the two nations might negotiate an Incidents at Sea Agreement similar to the one America had with the Soviet Union. Iran could also be better incorporated into the international counterpiracy task forces in which it has already played a productive role in the past, without raising the concerns of other regional partners. The U.S. Chief of Naval Operations Admiral Jonathan Greenert complimented the role of the regular Iranian navy in its active participation in anti-piracy patrols in 2012, stating that it is comprised of “…professional, courteous, and good mariners.” Of course, such cooperation would not obviate the need to be prepared to respond to intentional escalation, especially by the IRGC Navy forces responsible for operations in the Gulf.

On Afghanistan, the United States and Iran have already cooperated in 2001 during the initial U.S.-led invasion. Iran played an important role in the Bonn conference that formed the first post-invasion government in Kabul. Both the United States and Iran still have the same interests in limiting Taliban influence as they did in 2001. Iran’s biggest conflict with the United States in Afghanistan stems from its fear of a large American force in Afghanistan permanently stationed on Iran’s Eastern border. Given the current drawdown, those concerns should dissipate, opening the way for greater cooperation. Moreover, working together to stem the flow of opium from Afghanistan into Iran, which harms Iranian society and becomes a transit point to Europe and the Middle East, represents an apolitical and technical matter on which all sides can cooperate. Finally, the intense Sunni-Shia sectarian rivalry that defines the conflicts in Syria and Iraq is not as salient in Afghanistan, reducing the negative reactions of the Gulf States to U.S.-Iranian cooperation in this sphere.

However, a deal that truly resolves the nuclear issue can be a foundation for progress. In the immediate aftermath of an agreement the United States should pursue a patient, limited and piecemeal approach focused first on areas where cooperation would be most natural and least worrisome to our Arab partners. Over time, this policy can expand and eventually move Iran and the United States towards a much more normal relationship akin to those with China or Russia where the two states work together on issues of common interest even as they continue to compete when their interests diverge. Such an outcome could truly improve the regional-security environment of the Middle East. But Iran’s decision to address the international community’s concerns about its nuclear program must be the first step.

Ilan Goldenberg is a Senior Fellow and Director of the Middle East Security Program at the Center for New American Security. Jacob Stokes is the Bacevich Fellow at CNAS, where he works in the Strategy and Statecraft Program. Nicholas A. Heras is the Research Associate in the Middle East Security Program at CNAS. They are the authors of the CNAS policy brief “Slow Thaw: Testing Possibilities for Cooperation with Iran After a Nuclear Deal.”