The Real War in Ukraine: The Battle over Ukrainian Identity 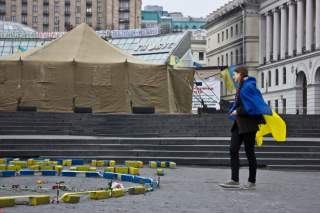 The following were remarks prepared for a panel on “Russia in the Global Context,” held at New York University and jointly sponsored by the Jordan Center for Advanced Russian Studies at NYU and the Carnegie Council for Ethics in International Affairs, December 1, 2014.

The conflict in Ukraine is a conflict among indigenous communities that have very different ideas of what it means to be Ukrainian. It is a war over Ukrainian identity.

For the Westernmost regions (Galicia), being Ukrainian means suppressing Russian culture so that Ukrainian culture can thrive in its stead. Here, creating a Ukraine that is antithetical to Russia is commonly referred to as making a “civilizational choice” in favor of Europe.

For the eight Russophone regions of eastern and southern Ukraine (which I call the Other Ukraine), being Ukrainian means being a distinct nation that is still very close to Russia. These Ukrainians do not wish to join Russia, but neither do they wish to be forced to forsake Russian culture in order to be considered loyal Ukrainians. They do not accept the idea that there is any civilizational choice to make, but if forced to choose between a Ukraine in NATO or the EU and a Ukraine in alliance with Russia, they prefer Russia by a 2:1 margin.

At its core, therefore, this conflict is about whether Ukraine should be a monocultural or pluricultural nation, and peace is unlikely until Ukrainian politics are brought into conformity with the country’s cultural reality.

For more than two decades, these two regionally based versions of national identity managed a tense co-existence, alternating the presidency between them and thwarting the functioning of parliament in order to prevent the other side from implementing its maximum political agenda.

This gridlock prevented reform, it is true, but it was also Ukraine’s way of avoiding civil war, which many believed would erupt if one side were to dominate completely, and turn its definition of Ukrainian identity into a test of civic loyalty.

This is what many Ukrainians believe happened on February 22, 2014. Yanukovych’s ouster was seen as a violation of the delicate political balance between Galicia and Donbass, and, therefore, a direct threat to the core interest of Russophone Ukrainians. Two-thirds of Donbass residents surveyed in early May said they regarded the Maidan as “an armed overthrow of the government, organized by the opposition with the assistance of the West.”

The same day three thousand local officials from the eastern and southern regions gathered in Kharkov and voted to assume political control in their regions until “constitutional order” was restored in Kiev.

In Crimea, the regional parliament went even further and sought to redress an old grievance, the abrogation of its 1992 Constitution, by calling for a referendum on greater autonomy within Ukraine. Kiev responded by sacking Ukraine’s defense minister and putting the military under the direct command of the new acting speaker/president, Oleksandr Turchynov, who tried to replace local military commanders and security forces in Crimea.

Crimean authorities request the assistance of the Russian Black Sea Fleet stationed in Crimea in maintaining security. Citing the threat to Russian citizens, military personnel and compatriots in Crimea, Putin is given authority to use Russian troops in Ukraine. A week later the Crimean referendum is moved up, the question changed from autonomy within Ukraine to secession with the intent of joining Russia, and the rest is history.

The same scenario begins to unfold in Donbass, but there, Russia responds very differently.

First, it distances itself from the rebels and opposes their referendum for greater autonomy within Ukraine (not secession)—which the rebels go ahead with anyway.

Second, after holding military exercises in February, Russia announces the return of troops to their barracks in late April, after the beginning of Kiev’s military campaign in the east.

Finally, after Petro Poroshenko’s election, and just as the Ukrainian military campaign in the east expands, Putin asks the Russian parliament to rescind his authority to use troops outside Russia.

I, therefore, do not believe that Russia’s strategy aims at destabilizing Ukraine. It is already coping with half a million refugees. More instability will only produce economic collapse, a failed state and millions of refugees. What it wants, I believe, is a stable Ukraine that will be able to repay the 30 billion U.S. dollars it currently owes Russia in private, corporate and government debt.

But it disagrees strongly with the West about how stability can be achieved.

The West is not in the least bit concerned with cultural differences in Ukraine and how they affect politics. It assumes that if corruption is reduced, the economy will grow, and cultural divisions will simply fade away.

Russia, on the other hand, sees Ukraine as a culturally fragmented society. Corruption feeds on this fragmentation and leads to political gridlock. Peace and stability, therefore, require the legitimation of these cultural differences.

This is slightly different from the point I made at the outset, that peace and stability depend on bringing Ukrainian politics into conformity with cultural reality. There are actually two ways to do this.

The first is to forge a pluricultural Ukraine in which minority communities are given equal rights within the framework of Ukrainian political identity. This is actually Russia’s and the Russophone community’s preferred solution.

The second is to forge a culturally homogeneous Ukraine in which minorities are assigned a subordinate status and are politically powerless to change it.

The reasons are obvious. There are now six million fewer Russophone Ukrainians under Ukrainian government control. This is a 28 percent reduction of the Russophone population of Ukraine (not counting refugees).

Moreover, because the military conflict in so highly localized, compared to 2012, Russophone Ukraine has also lost 43 percent of its GDP and 46 percent of its export capacity. The once-dominant Russophone regions no longer have the wealth or political influence to sway national politics in their favor.

The latest parliamentary elections demonstrate the new correlation of forces. The population loss in Donbass and Crimea, combined with a 17 percent decrease in voter turnout in the rest of Russophone Ukraine, and a 3 percent increase in voter turnout in the three Galician regions, resulted in 90 percent of party list seats going to parties that advocate for Ukrainian cultural supremacy.

Whether or not a monocultural approach to Ukrainian politics can succeed will likely depend on how it treats its Russophone minority, which, in almost any scenario, will still constitute a third of the population.

Many prominent intellectuals have said that Russian speakers will need to be reeducated into a proper appreciation of their suppressed Ukrainian identity, a process that Donetsk University professor Elena Styazhkina calls “positive, peaceful colonization.”

To accomplish this, however, Kiev will have to impose a new political and economic elite in the region, just as the North did in the South after the American civil war. Indeed, the Parliamentary accords signed on November 21 contain, as one of their key provisions, military redistricting to ensure “a permanent military presence in the East.”

And, just as it did in the American South, institutionalized subordination of the minority is likely to spawn a subculture of resentment against “the occupiers,” and result in an illiberal democracy.

Our present attitude toward Ukraine reminds me of the Judgment of Solomon. Only, instead of being like the mother who relinquishes her claim to save the child, the West and Russia are like the woman who would prefer to see the child torn asunder, rather than let the other side have it.

In reality, our interest in Ukraine is two-fold. First, achieving a viable Ukraine. Second, removing Ukraine as a source of contention between Russia and the West.

The best chance of saving Ukraine in its present borders would be a reconstruction program beyond George C. Marshall’s wildest dreams.[1] A program of this magnitude would require pooling the resources of Russia, the EU the United States. and other international organization, and having them work together over many years.

Sadly, such a program has no chance of being implemented, mainly because it would acknowledge the obvious—Russia’s importance for preserving world order, which many now equate with “rewarding Russia,” rather than with common sense.

I suspect that we will be paying for our lack of vision for the rest of this century. Two likely consequences spring to mind.

The first is the demise of Ukraine as we now know it, as the country fragments into those very spheres of influence that political leaders claim to be so fervently against.