The Real Winner in America's Russia Crisis Is China 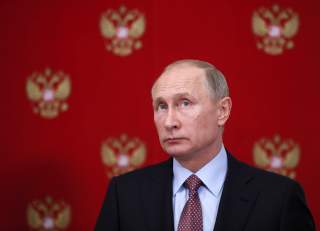 When thinking about male-pattern baldness, what comes immediately to mind? Genetics? Thanks for this, grandad.

But then I conducted my own scientific research and discovered the following: I started losing hair at the temples or the crown of the head when Vladimir Putin first held the position of president from 2000 to 2008, and my hairline receded big time after the Russian leader took office again in 2008.

Coincidence? Or is it possible that the balding Putin, resenting the hairy Dmitry Medvedev, not to mention those American presidents with their incredible full heads of hair, decided to do something about that? Isn’t that what you would expect from the Kremlin’s notorious alpha male, who was probably envious of my Fabio-like flawless hair in the late 1990s?

So did my hair loss have anything to do with the RT programs I started watching in the beginning of the new century? Or with the news reports on pravda.ru I was devouring daily? Or perhaps my bald spot was expanding as a result of paying more attention to the sexy Russian ads on Facebook? Or should I blame those Russian trolls on the social media who wanted to become my virtual friends and were posting videos of cats playing the piano on YouTube?

Well, after an extensive research of the topic, I am now more inclined to blame my late grandpa, not Putin, for my receding hairline.

But then surely we can still all agree that the Kremlin has been responsible for much the problems plaguing the world today, like the rising protectionist tide and the emergence of right-wing nationalist political parties in Europe. And of course, Putin was behind the election of President Donald Trump and the Brexit vote.

In fact, according to a study issued last week, one of the many research projects conducted these days about alleged Russian intervention in the electoral process of this or other country, more than 150,000 Russian-language Twitter accounts posted tens of thousands of messages in English urging Britain to leave the European Union in the days leading to last year’s referendum on the issue.

Similarly, the Spanish media have been accusing Russia of playing a major role in the Catalan independence crisis by employing its state-controlled media outlets, like RT and Sputnik, and its legions of trolls on Facebook and Twitter, as part of a strategy to encourage Catalan separatism. Much like the case of Brexit, Russia has been accused of trying to weaken the EU and NATO and devastate the West.

Many of these “the Russians did it” accounts assume that supporters of Brexit in England’s East and West Midlands and the pro-Trump voters in Ohio, Michigan and Pennsylvania, as well the backers of independence in Catalonia, were driven to the polls by a sophisticated propaganda campaign directed from Moscow, which is believed to have coordinated with candidate Trump and his aides.

Indeed, according to a report on the Russian electoral interference, released by America’s intelligence agencies on January 6, the coordinated activities of RT and the online-media properties and social-media accounts that make up “Russia’s state-run propaganda machine” have been utilized by Moscow to “undermine the U.S.-led liberal democratic order.”

Yep. Forget about the impact the German chancellor Angela Merkel’s immigration policy had on the British public, or the impact of presidential candidate Hillary Clinton’s bashing of the “deplorables,” or the rise of secessionist movements in Catalonia—not to mention the deep structural economic and political changes sweeping the West in response to the effects of unrestrained globalization and mass migration, and the backlash against the political and business elites. It’s the Russians, stupid!

We are supposed to buy into the notion that white blue-collar workers in deindustrializing areas of the Rust Belts of the United States and the UK spent the last days of the 2016 Brexit campaign and the American presidential race getting their news from RT and Sputnik while exchanging tweets with Russia-friendly trolls. We are supposed to believe that they just couldn’t get enough of those ads on Facebook, which induced them to switch their support from Hillary to Trump.

If Russian propaganda is to be blamed for Trump’s electoral victory, we might as well take seriously serial killer Ted Bundy’s explanation for raping and murdering women in the 1970s. Pornography drove his behavior, he insisted during an interview a day before his execution. Penthouse made him commit all those horrific crimes!

But contrary to communication scholar Marshall McLuhan’s quip, the medium is not the message or the massage. The same news story or political or commercial advertising would have different effects on different audiences of perhaps have no effect at all.

You probably won’t be able to convince an Eskimo to spend his or her vacation in Antarctica or to sell sand to Bedouins in the Arabian Peninsula. Nor would a billionaire financing an expansive campaign in support of polygamy have a major impact on the views of the large majority of Americans.

This explains why the extensive Soviet propaganda machine had almost no effect on American public opinion during the Cold War, and why it was mocked by those who were exposed to it.

That RT, which, according to a 2015 survey of the top ninety-four cable channels in America by Nielsen, a research firm, captured at one point just 0.04 percent of American viewers, suggests that today’s Russian global-propaganda apparatus, isn’t much more effective. It certainly has not had much impact when it comes to reaching British voters in the country’s rural areas who spend more time drinking in pubs than watching RT.

America’s spooks, who asserted in their much-cited report that RT videos get one million views a day on YouTube, didn’t bother to add that much of what it posts there consists of footage of natural disasters or dancing dogs.

If you watched the recent grilling of the heads of the social-media companies on Capitol Hill, then you might conclude that what turned the election outcome in Trump’s direction was a decision by “the Russians” to spend $100,000 on Facebook ads and the “Russian trolls” who posted disinformation or fake news online.

Recall that Mark Zuckerberg, the founder of Facebook was until recently considered by Democratic lawmakers to be a cross between Henry Ford and Albert Einstein, while liberal pundits celebrated Facebook as a leading force promoting democracy and freedom worldwide, not to mention its role in helping Barack Obama win two presidential elections.

But now that they conclude that Zuckerberg supposedly provided a platform to the disinformation campaign of the notorious Putin and his evil partner, Trump, Facebook is “too big” and it and the rest of the social media need to be regulated.

But as Democratic campaign consultant, Mark Penn, explained in the Wall Street Journal, there is no evidence that the Facebook ads and fake news had any effect on the election outcome.

“Even a full $100,000 of Russian ads would have erased just 0.025 percent of Hillary financial advantage in the campaign,” wrote Penn, who calculated that only half of the “Russian” ads went to swing states. In the last week of the campaign alone, Clinton’s Super PAC dumped $6 million on ads into Florida, Pennsylvania and Wisconsin.

If the Russians were indeed engaged in a propaganda campaign, it proved overall to be very inept and amateurish. Certainly there are no signs that RT has captured larger American television audiences than other foreign-media outlets, like the moribund Al Jazeera America, or similar operations launched by China and other foreign governments.

But don’t tell that to the Washington elites who, through media reports and a government investigation, have continued trying to convince themselves and the rest of us that Russia, in collusion with Trump campaign officials, was responsible for Clinton’s election loss.

Their efforts have gained steam thanks in part to the way that Trump and his close aides conducted their campaign. Boasting that they would not rely on the assistance of so-called Washington insiders and disregarding standard operating procedures, like the need to properly vet political advisors with or without ties to foreign governments and businesses, they made it easier for their adversaries to depict telephone conservations and brief conversations with Russian diplomats and businessmen as “collusion.”

It’s important to point out the obvious: the United States and Russia are not at war and the Americans maintain extensive diplomatic and economic ties with the Russians, much like they do with the Chinese communists or the Saudi theocrats. That China, Saudi Arabia, Russia, Israel and other friends and frenemies spend a lot of money recruiting political allies in Washington or expanding their business operations in the United States shouldn’t come as a big surprise to anyone. It would also explain why any big time lobbyist and political operator maintains some sort of ties to these countries.

The current demonization of Russia as a global threat to American interests and values, and of President Putin as the world’s leading arch-villain, can be explained as an extension of the Cold War, of auto-piloting a foreign-policy paradigm that Republicans and Democrats feel comfortable with. But that is intellectually dishonest, considering American partnerships with mass-murderers like Stalin and Mao, and runs contrary to U.S. interests.

First, the preoccupation with the alleged Russian threat makes it impossible to cooperate with Moscow in dealing with common interests in the Middle East and elsewhere, which was President Trump’s goal in reaching out to Moscow, hoping to work out a deal to end the civil war in Syria and reduce the costs of American intervention in the Middle East.

Moreover, the long-term challenge to U.S. global military and economic power is China, and not that second-rate power, Russia.

The continuing American obsession with Russia, like the never-ending military interventions in the Middle East, plays directly into Chinese hands and makes it less likely that Washington would be able to develop an effective strategy to deal with China, including through ad-hoc cooperation with Moscow.

Instead, keeping the Russia collusion story would only encourage China and Russia to further collaborate over and target U.S. interests. And unlike my receding hairline, that isn’t a funny joke.