The Real Winner in the Ukraine Crisis 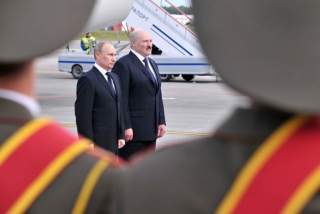 As the Ukraine crisis unfolds, analogies with Kyiv have spilled over into Belarusian politics. Initially, the Belarusian opposition crossed its fingers for a Maidan-like mobilization to emerge in Minsk. Many hoped that Belarus would be next in line to topple an authoritarian leader and integrate into Europe. Later, when the situation in Ukraine took a more dangerous turn, hope was replaced by a fear that Belarus would be the next victim of Russian annexation.

Neither of these predictions takes into account the differences between Belarus and Ukraine.

Though it took the Belarusian leadership unawares, the Ukrainian crisis may well turn out in Belarus’s favor. Minsk is already benefiting from renewed attention from the EU, as Brussels vowed not to let the Maidan aftermath affect its relationship with Belarus. Calls for boycotting the Ice Hockey World Championship, to be staged in Belarus in May, have been overshadowed by the need to engage what is left of Russia’s “front yard”. Meanwhile, Belarus’ bargaining position vis-à-vis Russia could improve as the Kremlin faces international isolation. Not least, the Ukrainian troubles have produced a “rally ‘round the flag” effect in Belarus. Polls actually indicate an improvement of President Alexander Lukaschenko’s confidence rating.

Balancing the EU and Russia

Lukaschenko has shown an uncanny ability to balance between the West and Russia in the past. He engaged with the West on issues that did not endanger his power, such as border security, while avoiding cooperation in potentially destabilizing domains. Between 2007 and 2013, the EU paid €200 million in technical assistance to Belarus, which the regime gladly accepted without making any concerted effort at political reform.

Now Putin, not Lukashanka, is the West’s bête noire. At a March 10 conference in Minsk, the EU vowed not to let events in Ukraine undermine its rapport with Belarus. The two sides are moving forward on talks over visa facilitation and readmission agreements. These modest steps will likely mature into broader consultations, such as talks on the modernization of the Belarusian economy.

At the same time, Lukaschenko has maintained a close relationship with Russia, benefitting from his larger neighbor’s subsidies while ensuring that his government maintains controlling stakes in key Belarusian enterprises. Contrary to popular belief, the events in Ukraine have enlarged, not diminished, Minsk’s room for maneuver. On the one hand, Lukaschenko criticizes Russia’s invasion as “bad precedent” and opposes the federalization of Ukraine. On the other hand, Belarus has joined eleven states that voted against the resolution on the territorial integrity of Ukraine at the UN General Assembly and accepted the status quo in Crimea.

International opprobrium of Russia’s actions in Ukraine could also strengthen Minsk’s bargaining position vis-à-vis Moscow. In particular, Moscow’s isolation has increased the importance of forging Eurasian Economic Union (EEU), with or without Ukraine. As the founding EEU treaty is being drafted, Belarus is keen on abolishing oil exemptions, which would amount to an additional $3-4 billion in revenues at Russia’s expense. While this demand seemed untenable before, current Russian behavior suggests the Kremlin is willing to make new concessions to fulfill its Eurasian “dream.”

Rally ‘Round the Flag

Besides the diplomatic benefits, events in Ukraine have also produced a “rally ‘round the flag” effect in Belarus. Belarusians were initially worried about the chaos in Kyiv and the blood spilled in Maidan; then they were alarmed over the Crimea scenario; now they are watching in awe as eastern Ukraine descends into chaos. As a popular Belarusian saying goes, domestic problems are trifling, “as long as there is no war.” According to surveys conducted by the Independent Institute of Socio-Economic and Political Studies (IISEPS), a trusted, nongovernmental source of public opinion data, Belarusians’ confidence in Lukaschenko has risen by 8 percent since December 2013. Now 45.9 percent of respondents express confidence in the leader.

Already at the very beginning of the Ukraine crisis, Lukaschenko sought to draw favorable comparisons between Belarus and Ukraine. For example, he blamed the Ukrainian upheaval on corruption and proceeded to initiate a series of high-profile arrests on corruption charges in Belarus. He has continued with this same strategy since. If in the past his references to the threat of NATO were not particularly credible, now he can point to a genuine crisis right across the border.

On April 22, Lukaschenko began his annual address to the nation by emphasizing the need for unity in a time of crisis. He warned that internal disagreements are dangerous because there are always actors interested in exploiting these cleavages. This is not a new theme in his rhetoric, but now the dangers are far more real and are having the desired effect. It would be a mistake to interpret Lukaschenko’s rhetoric as genuine concern over Russia’s intentions. Instead, Lukaschenko is using the Ukraine crisis to portray himself as a guarantor of Belarusian stability and sovereignty and to divert attention from domestic problems.

In the meantime, Belarus is getting ready to host the Ice Hockey World Championship. According to the latest estimates, nearly 70,000 tourists from over fifty countries are headed to Minsk. Against the backdrop of the Ukrainian chaos, Belarus will seem an open, stable and effective post-Soviet state, if only for a few weeks during the games, until the human rights concerns return to the Western agenda.

Renewed attention to Minsk could be an opportunity for the West to abandon the black-and-white approach to understanding policy making in Minsk. Instead of lumping Belarus with other pariah states and treating it as an absolute dictatorship, Western analysts should be attentive to the actual processes of opinion formation and decision making in the country.

Volha Charnysh is a Kennan Research Scholar at the Wilson Center