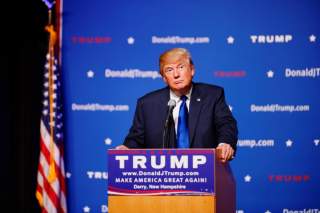 AFTER THE GOP lost the November 1954 midterm elections, Dwight D. Eisenhower’s cabinet met for a postmortem. Eisenhower asked Richard Nixon, then vice president, to explain the politics behind the defeat. “There were just too many turkeys running on the ticket,” Nixon said. Then he pulled a mechanical drummer from his pocket and released it. According to Irwin F. Gellman in his illuminating new book The President and the Apprentice, Eisenhower stared with surprise as the toy marched across the table banging its drum. The lesson of the election, Nixon said, was that “We’ve got to keep beating the drum about our achievements.”

What will the GOP bang the drum about in 2016? Just as in the early 1950s, when internal party divisions over Senator Joseph McCarthy damaged the GOP at the polls, so leading figures on the right are once again feuding with each other, as the resignation of House Speaker John Boehner recently illustrated. But no issue is roiling the party more than the Donald Trump candidacy. Charles Krauthammer, who has repeatedly pronounced Trump’s demise, said on Fox News that “This is the strongest field of Republican candidates in fifteen years. You could pick a dozen of them at random and have the strongest cabinet America’s had in our lifetime and instead all of our time is spent discussing this rodeo clown.” But if the field is really so strong, then why is Trump able to run rings around it, with the much-ballyhooed Wisconsin governor Scott Walker retiring from the race—and begging other candidates to emulate him so that, as he put it, “the voters can focus on a limited number of candidates who can offer a positive, conservative alternative to the current front-runner”—before a single primary has even been held? Rather than imploding, Trump appears to dominate.

For all Trump’s prowess at upending the party establishment, however, the sources of the current ferment likely go deeper than just him. While political parties periodically suffer from identity crises, the GOP in particular seems to fight over the same terrain with unusual fervor. One reason that it experiences these recurrent battles may be that the term “conservative,” which is traditionally synonymous with sobriety and caution, hierarchy and deference, has always occupied an equivocal, if not embattled, status in America. There exists a conservative movement in America, but no such thing as a nationally successful, formally named Conservative Party. Instead, the closest representative is the Republican Party, which has attempted to straddle the divide between moderates and conservatives, rendering it perennially subject to the charge from the right that it doesn’t stand for conservatism—or indeed much of anything. When former Republican presidential candidate Mitt Romney, for example, announced in February 2012 at the annual Conservative Political Action Conference that he was “severely conservative,” he earned widespread derision on the right as well as the left. “[W]hen he sells himself to conservatives,” the Weekly Standard complained, “he sometimes comes across as a right-wing caricature.” In this regard, Republican contenders for the Oval Office can often seem to resemble Alexandre Auguste Ledru-Rollin, a French politician who during the 1848 revolution heard a mob late one night shouting outside his bedroom and rapidly got dressed. “There go the people,” he said. “I must follow them. I am their leader.”

The problems do not end there. Perhaps the most distinctive feature of American conservatism is that, unlike its European counterpart, it does not reverence state power as conducing to stability but, rather, hopes to tame, if not overthrow, it. So whether America can even reconcile conservative principles with its own revolutionary founding is debatable. In 1955, the historian Louis Hartz published The Liberal Tradition, which essentially read conservatism out of American history. It argued that the absence of a feudal tradition and landed aristocracy meant that America was the “first new nation.” Hartz’s contention exemplified the rise of a self-confident liberal establishment in the 1950s, one which nourished the conviction that older ideological disputes, whether on the left or right, whether about economics, politics or culture, had largely vanished to be supplanted by a “consensus society.” The Eisenhower era, a byword for political and cultural somnolence, seemed to confirm its existence.

THE SAME year that Hartz’s book appeared, however, William F. Buckley, Jr., who had published God and Man at Yale in 1951, which created a national furor in upbraiding his alma mater for what would today be called political correctness, set out to establish a new magazine called National Review. It hoped to demonstrate that the notion of an American conservative political tradition was not a contradiction in terms. The fortnightly directly reflected the preoccupations of the political theorist Willmoore Kendall, Buckley’s mentor at Yale and a champion of Joseph McCarthy. Saul Bellow, in his short story “Mosby’s Memoirs,” portrayed Kendall, a former Trotskyist, as vexed by the “weakness of conservative doctrine, the lack, in America, of conservative alternatives, of resistance to the prevailing liberalism.” Interestingly, a number of figures at the magazine, including Willi Schlamm and James Burnham, also emerged from a Trotskyist milieu, which imbued them with an apocalyptic sense of politics. The exception to this crowd was Buckley. He was never a convert to the cause, having imbibed the conservative gospel as a child from his father, William.

In its inaugural issue, NR, as Buckley biographer John B. Judis has observed, located itself on an unusual intellectual continuum: “Conservatives in this country,” Buckley wrote, “are non-licensed non-conformists.” This was Buckley in his early, radical incarnation. Buckley didn’t want to marinate in the resentments of the prewar, isolationist right; rather, he hoped to go on the offensive with carefully crafted arguments delivered with dry wit and remorseless logic. He welcomed conservatives of various stripes, but his fundamental mission was to prosecute a culture war. He insisted that more was at stake than mere policy differences. The peril that America confronted was immediate and ubiquitous: a “decadent liberalism” had turned its back on permanent moral truths, thereby emasculating its will to battle against Soviet communism. Thus, in 1959, he declared that the “secular ideology of liberalism, which sets the tone of contemporary Western thought, is no match for Communism because it is not a redemptive creed.” Nor was Dwight Eisenhower—a “miserable president,” in Buckley’s estimation—up to the task with his sunny bromides and distaste for partisanship. Buckley sought to create a populist insurgency that targeted the Republican as much the liberal establishment.

As the new film from Magnolia Pictures Best of Enemies, an engrossing exploration of the ten debates between Gore Vidal and Buckley that aired on ABC News during the 1968 Republican and Democratic conventions, reminds us, Buckley had gone some ways toward achieving his goal by the late 1960s. He had already helped conservatives clean up their act by anathematizing the John Birch Society in a 1962 essay. The very fact that he would appear on national television to comment on the conventions was itself a kind of validation of the newfound importance of the right. But ABC, which figured that the confrontation between Vidal and Buckley might buck up its sagging ratings, got even more than it may have bargained for in holding the debate. Its genteel moderator, Howard K. Smith, was barely able to get in a word edgewise as the two men jousted with each other. Buckley announced that he desired the “asphyxiation” of liberalism, while Vidal decried him as shedding “crocodile tears” for the poor and the GOP as constituting a repository of “human greed.”

At their August 28 session at the tumultuous Democratic National Convention in Chicago, Vidal branded Buckley a “crypto-Nazi” for defending the local police force’s actions against protesters—a term calculated to enrage Buckley, who had attempted to purge the right of its former dubious associations (the word also clearly perturbed Smith, who had served as a reporter for CBS in Germany until December 6, 1941, and interviewed Hitler as well as a number of Nazi bigwigs). An incensed Buckley dismissed Vidal as a “queer.” How much really separated the two—each was a frustrated aspirant for political office, each spoke in a patrician accent, each was an Anglophile and each reveled in verbal combat—may be wondered. But while Vidal won the intellectual battle between the two by never dropping his lordly air of superiority, Buckley ultimately prevailed in the political one. Buckley reached out to neoconservatives such as Irving Kristol to provide the intellectual basis for a broader conservative movement, one that would work to peel away white working-class voters from the Democratic Party. This new alliance prompted Michael Lind to observe in Politico that by the 1980s Buckley “was a neoconservative in all but name.”

The cultural fissures that had opened up during Lyndon Johnson’s presidency—the riots at the Chicago convention, the rise of the antiwar movement and black power—issued in Richard Nixon’s presidency. But Buckley and his cohort never viewed Nixon as a true conservative. As Jeffrey Hart, a National Review stalwart and speechwriter for Nixon during the ’68 campaign, observed in his insightful chronicle The Making of the American Conservative Mind, the shrewdly calculating Nixon positioned himself as a centrist—to the right of Hubert Humphrey and to the left of George Wallace: “He would beat back Wallace and the segregationists, letting the Deep South go, but trying hard for everything outside that Wallaceite core… In the sense, he had a ‘border state’ rather than a ‘southern’ strategy.” Nixon never succeeded in cementing a durable coalition and indeed was attacked by the neoconservatives. But with Reagan’s triumph, a conservative revolution was consummated. Buckley, once seen as a heretic, was, as media critic Eric Alterman notes in Best of Enemies, now a “kingmaker.”