The Republican Debates: Who Won, Who Lost and Who Flopped 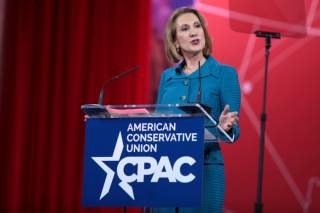 The second round of Republican presidential debates was a whirlwind, as a seemingly limitless field of candidates engaged in a seemingly endless series of arguments. If CNN’s broadcast from Ronald Reagan’s library were a movie, it would have been The Never-Ending Story.

Despite the absence of Carly Fiorina (promoted to primetime), Rick Perry (departed from the race) and Jim Gilmore (he did not make the kiddie table), the undercard debate for lower-performing candidates was improved as a whole. No, nobody did as well as Fiorina last time but shrunk to a manageable four candidates there were some intelligent exchanges about important issues.

Lindsey Graham was the most improved. The South Carolina senator sleepwalked through his first debate, comically pairing apocalyptic descriptions of the world with an understated delivery that made it sound like he was discussing drying paint rather than imminent death at the hands of jihadists.

This time around, Graham got in some clever lines. Invoking Ronald Reagan’s bipartisan relationship with Tip O’Neill, he promised that when he was president people in Washington would drink more.

Although some of his arguments were a bit zany, Graham largely got the better of Rick Santorum in their back-and-forth on immigration. (I say this as someone whose immigration policy views are closer to Santorum’s than Graham’s.) And he at one point seemed to be setting the agenda on how Republicans should respond to the threat of ISIS. (I say this as someone whose foreign policy views couldn’t be further from Graham’s, period.)

Will any of it matter? Graham is polling near zero percent, so even a boomlet could be erased by the margin of error. After the many hours the primetime debate consumed, it’s possible that few Americans even remember the undercard event took place.

Bobby Jindal was energetic both in his defenses of conservative policies and his criticisms of Donald Trump, as expected. But the sitting governor of Louisiana wasn’t as dominant as one might have expected in a debate without Fiorina or any other stars. His sad degeneration from thoughtful policy wonk to desperate thrower of red meat, perhaps mirroring the steady deterioration of his governorship, will be one of the stories of the 2016 campaign.

Santorum and even George Pataki also had their moments, reminding us why they were once important political figures. But social conservatives seem to have moved on from the former Pennsylvania senator and the former New York governor seems more like a contemporary of Harold Stassen than George W. Bush. Neither did enough to cause anyone to revisit these judgements.

Fiorina was once again the single most impressive debater. It wasn’t as decisive as when she was a woman among boys in the previous undercard bout, but she is a crisp and effective communicator. She put Donald Trump in his place better than any of his rivals so far. Her discussion of her stepdaughter’s untimely death from a drug problem was moving. And Republicans were reminded of the positive optics of having the case against Planned Parenthood—and what an impassioned case Fiorina made—being pressed by an eloquent pro-life woman rather than the usual phalanx of middle-aged dudes.

Trump generally gave as good as he got and remains a powerful entertainer, but his second debate performance highlighted two continuing problems. One is that the way he talks about women, deftly tweaked by Jeb Bush as well as Fiorina, is bound to turn people (women, namely) off. Secondly, he isn’t getting better with policy details and whenever the debate became a grown-up discussion of such things he seemed to disappear from the stage.

As I’ve noted before, Trump’s performance is notoriously hard to grade because voters don’t seem to apply the usual rules to him. Musing about John McCain’s military record or Megyn Kelly’s menstruation would derail most candidates’ campaigns but it doesn’t seem to put a dent in The Donald’s support. I don’t expect to see an immediate drop-off in his support—his base consists of people too loyal to bolt over his not knowing Quds from Kurds or too tenuously involved in politics to sit through a three-hour debate—but as the prospect of him winning becomes more real, these things are going to become a problem.

You can tell Trump is making some effort to be less over the top in his criticism of other candidates (except for Rand Paul, whose attacks really seem to annoy him) and to behave a little bit more like a presidential candidate, at least insofar as his personality will allow him to make these accommodations. It remains to be seen how well this will work out.

Marco Rubio was quite good, though he didn’t really have a standout moment. He made his arguments very well and presented an appealing vision of the country and the GOP. He is an attractive candidate with high favorable ratings, but these have yet to translate into him being a threat to win any state.

Trump is making Jeb Bush a better candidate. The former Florida governor showed more personality, dare I say energy, and got off some good shots at the reality TV star. But he still seems to lack a compelling narrative and his repeated, unnecessary invocations of the rest of the Bush family undermines his repeated, necessary claims to be his own man.

John Kasich was good and could emerge as a threat to Bush’s establishment support, but he makes too many arguments that the Republican base is likely to reject. By contrast, Ted Cruz was skillful and adept at telling the base what it wants to hear. He will either eventually siphon off some of Trump’s support or suffer from authenticity problems.

Like Lindsey Graham in the undercard, Chris Christie was the most improved from the first debate. He seemed to regain some of his swagger and smartly redirected the resume argument between Trump and Fiorina to the economic concerns of the 55-year-old construction worker. But also like Graham, you wonder if the constituency is there to revive his campaign in any meaningful sense.

Rand Paul made a welcome decision to actually debate foreign policy with his rivals rather than stressing common ground. If Trump can repeatedly say that the Iraq war was a colossal blunder, so can Ron Paul’s son. Mike Huckabee was folksy but I’m not sure Kim Davis can turn a presidential campaign around. Scott Walker wasn’t bad when he spoke, but he seemed to disappear for most of the night.

Ben Carson, like Trump, is hard to assess because he doesn’t seem to be judged by the normal rules. He was a nonfactor for virtually all of the first debate, but experienced a huge polling surge after an effective closing statement. His soft-spoken humility is a pleasant contrast to Trump’s bombast and many evangelicals admire his faith. But his views on most public policy issues seem oddly unsettled. The retired neurosurgeon is a political neophyte whose first run for office is a presidential campaign.

The length of the format made it impossible for everyone to be heard or for anyone to sustain any momentum. One moment, Fiorina seemed to be mopping the floor with her opponents. The next you wonder if she had left to tour the Reagan library. The questions, especially in the undercard debate, were insultingly Trump-obsessed.

Although the primetime debate is unwieldly, it would probably be best at this point to wait for the voters (or at least the donors) to winnow it further. And while the undercard debate exceeded expectations, you have to wonder how long it is going to continue if it is limited to candidates who really don’t have much popular support.