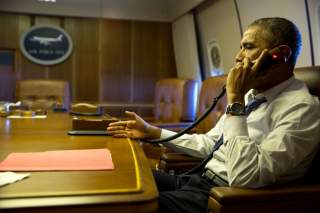 That President Obama simply opposes the Keystone XL pipeline and would never approve it has been obvious for years, especially after the January 2014 publication of the State Department final environmental impact statement, the minutia of which showed that the net environmental effects of the project would be either trivial or positive. Both before and since, the excuses have been countless and tortured, in particular given the State Department conclusion that the pipeline would have virtually no effect on greenhouse gas (GHG) emissions, even under the most extreme assumptions.

And so it is no surprise that Mr. Obama now has made it clear that he will veto the legislation forthcoming from the new Congress authorizing construction of the pipeline. But, however unsurprising, the veto threat nonetheless is deeply revealing in two dimensions that can be summarized as follows.

First: Back in ancient history—November 2008—in the immediate aftermath of the election of Senator Barack Obama to the presidency, the majority of Democrats in the House of Representatives replaced Congressman John Dingell (Michigan) with Congressman Henry Waxman (California) as chairman of the Energy and Commerce Committee. Whatever his love of pork and regulation, Dingell was an old-school Democrat with deep ties to the blue-collar labor movement generally, and to the automobile industry in particular. Waxman, in contrast, was closely allied with the left-wing environmental movement, making no secret of his desire to make climate policy and expensive electricity the central objectives of domestic legislation and regulatory effort (see below for more on this).

The defeat of Dingell reflected a dramatic shift of political power within the Democratic party from the private-sector unions in the heartland to the green movement on the coasts, and Mr. Obama’s explicit opposition to Keystone XL is an essential component and a direct reflection of that dynamic. Hence, the growing alienation of the Reagan Democrats from the Democratic party, a broad reality of which this particular veto threat is but a small component.

Second: If built, Keystone XL will transport 830,000 barrels per day of Canadian crude oil, the total GHG emissions from which would be 147-159 million metric tons per year, on a lifecycle basis. That this oil will be produced with or without the pipeline is a given. In the extreme case in which the oil does not displace any other crude-oil production elsewhere in the world, the increase in GHG emissions would be about 0.4 percent of the world total. The effect on temperatures in 2100? About one ten-thousandth of a degree. Moreover, transport of oil by pipeline is substantially safer and lower risk in terms of spills than transport by rail or truck.

For the Obama administration and many Congressional Democrats, those truths do not matter: Restrictions on the ability of the market to improve the efficiency of energy production are part of a larger effort to raise energy costs in red states relative to blue states, thus reducing the blue-state competitive disadvantages created by many of their regulatory policies. (Keystone XL for technical reasons would reduce gasoline prices, particularly in the Midwest.) Accordingly, the threatened veto of Keystone XL actually is a small component of a larger effort to transfer wealth from red states to blue, and thus is far more centrally driven by objectives political, rather than environmental.

The opposition to Keystone XL is one manifestation of the essential anti-human core of modern environmentalism, in both narrow and broad dimensions. Narrowly, the pipeline, by reducing costs and improving market operations, would yield an increase in national wealth, whether by an amount small or large, and market forces would direct some part of that increase to ordinary people in the form of expanded employment, higher incomes and increases in the value of their land and other capital assets. It is ordinary people—their preferences, their lifestyles, their values, their very existence—that the modern environmental movement and the political left more generally view with utter contempt, so that this destruction of wealth for them decidedly is a feature, rather than a bug.

At a broader level, inventiveness—the ability to use intelligence to overcome the obstacles inherent in nature after the exit from the Garden of Eden—is uniquely human, and one striking feature of modern environmentalism as an ideology is a pavlovian opposition to much technological advance. Genetic engineering, childhood vaccinations, nuclear power (whatever the underlying economics), hydraulic fracturing, advanced herbicides, the pharmaceutical industry, ad infinitum: The left hates it all regardless of the specifics. However narrow the Keystone XL issue may appear to be, the battle is both economic and more fundamentally ideological. It is, therefore, well worth fighting.