The Right Way to Bring Peace to the Middle East 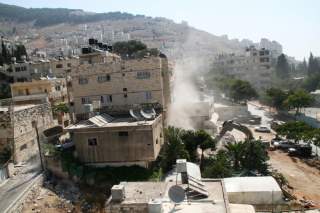 Since George W. Bush first dared to use “Palestine” as a proper noun in 2002, the mantra in Washington has been that the solution to the Israeli-Palestinian conflict is known: two states, living securely and peacefully side by side, with all thorny issues of refugees, borders, settlements, and Jerusalem negotiated.

That is clearly no longer the case. It is time now to guide the parties to thinking about alternatives—and to do so without hurting each other. Outsiders—most of all the United States—have neither the imagination nor the will to do this themselves. But they can help point dynamics in a healthier direction by shelving the idea of an immediate solution for now and concentrating on the lives of people who have been ignored (such as those in Gaza) and arenas that have been devalued (international organizations and legal mechanisms).

Two-staters were right when they first said that other solutions are unrealistic. Now the shoe is on the other foot: a two-state solution is wildly impractical; while it sounds good in theory we have seen enough of what it would look like in reality to know that it would likely codify existing injustices rather than resolve them.

The “peace process” has enabled rather than overcome a set of security arrangements, settlements that have led to Palestinian despair and allowed Israel to ensnare itself in a reality that is workable now but offers a very unattractive future of institutionalized racism, militarism, and international ostracism to the current generation’s grandchildren. Quiet conversations are taking place among Israelis and Palestinians—and sometimes even between them—on alternatives.

But to expect those same actors who failed at two-state diplomacy to fixate immediately on an alternative resolution immediately is unrealistic. There are two obvious shifts for outsiders to make in order to facilitate and protect the process of finding more workable and just arrangements.

First, outsiders can lead an approach that starts not with conflict-ending diplomacy, but with Gaza, which is still suffering from a high level of economic isolation that began over two decades ago and has grown extremely strict. Gaza is also still reeling from the effects of last summer’s brutal fighting. One of the largest obstacles to such an approach is the fear that it would entrench Hamas—as if isolation had not resulted in the entrenchment in the first place. A set of workable arrangements among Egypt, Israel, and the two halves of the Palestinian leadership (Hamas and Fatah) would lead to reconstruction in Gaza, alleviate horrendous conditions, and allow diplomatic movement to begin breaking the current logjam. Of course, such political efforts might fail, and in that case, we would have nothing to show for them—except an alleviation of Gazan suffering.

Focusing on Gaza does not mean ignoring what is happening in the West Bank. But it shifts the focus from the way that Israeli settlements prejudice future borders to the far deeper problems of a set of security arrangements that confine Palestinians and place them under an unfriendly and intrusive Israeli system of control that masquerades as a set of stopgap measures but is in actuality older than some grandparents yet serves no defensible long term vision.

Second, outsiders can lead an effort to take international law and international organizations seriously. Specifically, that means that moving the conflict to the rich set of international mechanisms designed to manage and resolve conflicts should be regarded as a good thing. Repeating the mantra that the two parties should settle the conflict directly without the involvement of international bodies or international law has been an Israeli tactic abetted by the United States for decades—and it is an unrealistic to expect Israel to want anything else, since when Israelis and Palestinians face each other directly without anything than a negotiating table between them, Israel holds most of the cards. But it is a short sighted strategy as well, since it leads to Palestinian mistrust, zero-sum thinking on both sides, and human rights violations, some of which seem the product of thoughtlessness as much as design.

Sometimes the United States forgets that much of the existing international framework of institutions and documents is partly, even largely, an American post-World War II creation. Israel forgets how much protection it has from international law as a recognized state. And Palestinians treat “international legitimacy” as totally in their favor; they may be in for a set of rude surprises in another system. Overall, a conflict that was fought out in accordance with the principles of the UN Charter, the Geneva Conventions, and human rights instruments would impose real burdens and obligations on all parties—but ones that serve the long-term interests of all.

These suggestions might seem like the product of daydreaming—and indeed they may have been a decade ago. Today there are signs that the parties themselves are moving in this direction and talk of “reassessment” has even begun in the United States’ executive branch. That is good news. After a generation of subordinating so much to the priority of the peace process, it seemed that the point of negotiations was…allowing a new round of negotiations.

It is instructive here to recall President Barack Obama’s startling recent acknowledgment that the idea that “with some common sense …we could resolve what has been a vexing issue” with “two states living side by side in peace and security” now “seems very dim.” At the time he made it, it was the rare expression of presidential orneriness toward Israel that drew public attention. But among specialists, the futility of two-state diplomacy had grown increasingly obvious over the past few years. The only question was who induced the president to smell the coffee and why a politician suddenly discovered the virtue of honesty on the subject.

For these ideas to be a policy that might work rather than a set of ad hoc steps that are repudiated if success seems near, someone has to speak them publicly. Maybe someone should serve Obama a second cup of coffee.

Nathan J. Brown is a nonresident senior associate in the Middle East Program at the Carnegie Endowment for International Peace and a professor of political science and international affairs at George Washington University.