The Rise and Fall of the Soviet 'Death Star' 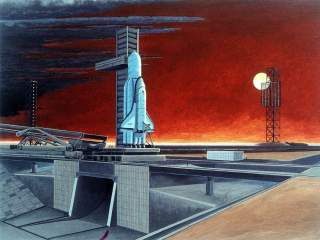 The ambitions of the United States and the Soviet Union, late in the Cold War, to launch massive weapons into outer space sounds like a fever dream today. Few however know just how serious it got, with the USSR making impressive progress on plans for a so-called “Red Death Star” to be launched into orbit.

Despite signing a 1972 anti–ballistic missile treaty with the United States, the USSR continued research into missile defense well into the 1970s. When President Ronald Reagan announced his "Star Wars" concept in March 1983—a moonshot-like missile shield that would render ICBMs obsolete—the Soviets were ready with a response.

Had it worked our world might be a different place. But the Red Death Star crashed and burned, the victim of a crash program undertaken by a failing power. Nonetheless, the project's purpose and technology lived on, and may darken the skies again.

How War From Space Began

In the early glory days of spaceflight, both the Kremlin and the Pentagon sought military spacecraft able to engage and attack each others' space assets. The triumph of the Apollo moon project eclipsed the American Manned Orbiting Laboratory (MOL). By 1975, when astronauts and cosmonauts met in space for the first time, space stations seemed the path to cooperation rather than competition in space.

But the Soviets saw in space stations a chance to surpass the Americans in one important field. The first Soviet space stations, the Salyuts, were in fact disguised military satellites. One mission even tested an anti-satellite cannon.

A year after the Apollo-Soyuz Test Project, the Soviets began serious research into orbiting ABM weapons: the Skif-D laser and the anti-missile missile Kaskad. The massive vehicle designed for these weapons was called “Polyus,” or “[North] Pole.”

Why did the USSR plunge into space war in the middle of the era of detente? In part because of the Space Shuttle.

The U.S. Air Force had a large, if largely quiet, hand in the Shuttle's design and intended to fly classified payloads aboard the space plane. As the winged spaceship grew bigger and more complicated to meet the Pentagon's planned needs, Soviet observers saw it as a major space weapons system.

Space historian Asif Siddiqi has noted, "The shuttle really scared the Soviets big-time because they couldn't figure why you would need a vehicle like that, one that made no economic sense. So they figured that there must be some unstated military rationale for the vehicle—for example, to deliver and recover large space-based weapons platforms, or to bomb Moscow."

Meanwhile, Soviet success with space stations and experiments with laser weapons raised alarm bells among American defense hawks. Shortly after Ronald Reagan became president in 1981, a number of American weaponeers—chief among them Dr. Edward Teller—brought to the President's attention both the Soviet research effort and potential American countermeasures.

Ironically, Polyus began much the way as the Yankee Star Wars idea: a weapon to shoot down American ICBMs during their boost phase as they climbed into space on their journey of death. Like the MOL and the Salyuts, it was to be manned, until the Salyut missions proved definitively that a man in the loop added little but expense and complications.

Reagan's 1983 Star Wars speech electrified the Soviet leadership. As early as June 1984, the Kremlin determined to match the Americans and authorized the Polyus-Skif project. In 1986—the year the vast American R&D effort topped out at over $3 billion—the USSR launched a crash program to put their own battle station in orbit.

First intended as a Star Wars anti-missile weapon, the Red Death Star became instead a Jedi-killer, armed to the teeth and cloaked in secrecy. Its targets were the yet-to-be American battle stations that Soviet fears had created.

The USSR hid Polyus within its space station program, because Polyus was essentially a repurposed space station. It was huge: 187 feet long, over 16 feet in diameter and 80 tons, about the size of America's Skylab space station.

The big laser proved too big for even the Proton rocket to lift, but the USSR's mighty new booster, the Energia, could loft both the weapon and its orbital platform. Delays in the Buran space shuttle program opened a slot for Polyus to ride the Energia rocket as its first payload.

Launch was set for early 1987. The crash Death Star testbed project ransacked much of the Soviet space program for parts. Engineers replaced the laser module, nowhere near ready for flight testing, with a boilerplate dummy. A lower-power laser designed to blind enemy satellites would test the targeting system.

The Soviets went to great lengths to hide Polyus in plain sight. Photos of Polyus on its Energia booster show it sheathed in a black low-visibility (possibly radar-absorptive) covering. A large laser reflector would permit ground sources to track the spacecraft without it transmitting.

The huge gas plumes from the gas laser weapon would instantly tip off observers as to the nature of the giant satellite, so Soviet engineers rigged the test article to expel a xenon-krypton gas mixture instead of the real thing's carbon-dioxide exhaust. The plumes and resulting effects were to be explained as a geophysics experiment.

Balloons filled with the same gas mix were to be jettisoned as radar/laser tracking targets, and to simulate launching the real nuclear space mines—yes, nuclear space mines!—that the real Polyus would carry. The balloon targets could also be tracked stealthily without radar via optics.

Not everything about the Polyus testbed involved smoke and mirrors. A real live "defensive cannon" aboard would have made short work of any hostile satellite. It would not have been the first Soviet space gun, either.

Perestroika and the Perils of Polyus

Political constraints and engineering challenges both beset crippling the sprawling project. Mikhail Gorbachev's public calls for a halt to space militarization continued all the way through his assumption of supreme power. Gorbachev and his allies decried America's Star Wars in public, while trying to rein in the Soviet military-industrial complex in private.

And there may have been another hidden but greater danger.

According to Yuri Kornilov, former Chief Designer of the Salyut Design Bureau, Gorbachev became convinced that what his military sought in Polyus was a true Red Death Star—an Orbital Weapons Platform capable of dropping nuclear warheads anywhere on Earth.

What frightened Gorbachev, suggested Kornilov, was his awareness of how ramshackle and unwieldy—like so much of the Soviet military machine—the Red Death Star was. The thought of loading it with H-bombs spooked even the Politburo.

In January 1987, just weeks before launch, orders arrived at Baikonur Cosmodrome barring the Polyus/Skif DM test flight from testing the gas venting or tracking targets. The Reykjavik Summit between Reagan and Gorbachev, which took place the previous October, had ended over disagreements about Star Wars. The USSR could not get caught testing space weapons in this climate.

Gorbachev's reputed doubts were justified. Kludging together the various components to build Polyus wound up placing the spacecraft's primary engines in its nose during flight. The inertial guidance sensor controlling the spacecraft's pitch came out of another satellite without proper testing before Polyus left the factory.

On May 15, 1987, the giant Energia rocket lit up the Kazakh steppe and roared into the night sky. Polyus separated from its booster and began a preprogrammed tumble to bring its engines into line with its flight.

A bum sensor and a software glitch, both fruits of a rushed schedule, put the huge spacecraft into two full tumbles before aiming it back towards Earth and its doom. Polyus fired its rockets, reentered the atmosphere and crashed into the South Pacific.

The death of the Red Death star spelled the end of the USSR's space weapons program, and arguably hastened the end of the USSR itself. But the core elements of Polyus and the "recycling" spirit of Russian aerospace lives on in the International Space Station's first component: the Zarya module, perhaps a part of the lost Red Death Star. And the core paranoia behind Polyus lives on—in the recently "exposed" Russian underwater nuclear drone.