The Risk of a Humanitarian Disaster in Mosul 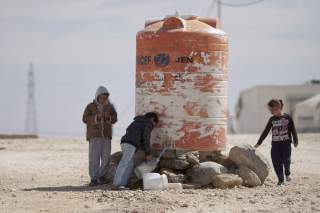 The fight for Mosul has finally begun. On Monday, Iraqi and Kurdish forces, backed by allied militias and American air support, launched the long-anticipated campaign to retake what is perhaps the most critical population center that Islamic State captured in its 2014 onslaught, now its last substantial stronghold. After months of careful preparation, victory on the battlefield is all but assured. Yet when it comes to dealing with the operation’s humanitarian consequences, success is far from certain.

That’s a grave concern, since the consequences are likely to be dramatic. The UN estimates that two hundred thousand people will flee the violence during the first few weeks of battle, seeking safe haven and shelter. That number may reach 1.2 million before the operation ends. The majority of them will not attain refuge in well-established displacement camps. Instead, they will be directed to “emergency sites” that provide only the most basic services. Last week, those sites had the capacity to hold sixty thousand people—far short of the number in need.

The looming crisis compounds an ongoing one that has relief agencies and frontline states stretched to the brink. The number of people in Iraq who need some form of humanitarian assistance already exceeds ten million. That's nearly one-third of the country’s population.

The scale of need is so great and the political terrain so fraught that the task ahead is daunting. Yet accomplishing it is necessary—not just for humanitarian reasons, but for political and security ones. Research shows that fear of or exposure to violence may exacerbate communal tensions, already running high in Iraq. That can harden political attitudes.

To the extent that protecting civilians and delivering effective humanitarian assistance bring down the level of desperation, they will positively impact how Iraqis interact with one another once the violence is over. That, more than anything, is consequential to the country’s future. Fortunately, there are steps that the U.S. administration can take, together with the international community, to stave off a catastrophe.

First, relief efforts must be adequately resourced. In advance of the operation, UNHCR developed an emergency response plan to address the coming crisis, which it estimates will cost $196.2 million to implement. To date, less than half of those funds have been committed. This, despite the high level attention paid to resource gaps when world leaders convened at the UN General Assembly in September.

The administration should work with its partners and allies—particularly those in the Gulf—to ensure that the plan is fully financed. The United States has spent more than a trillion dollars since 2003 in its effort to stabilize Iraq. Purchasing tents, heaters and shelter kits now would constitute a modest but worthwhile investment.

Establishing safe pathways out of the violence will be equally important. Rights groups warn that hundreds of thousands may be caught in the fighting, especially those who are unable to leave the city. They risk exposure to chemical weapons, even use as human shields. Those who manage to exit will have to cross conflict lines, encountering landmines and IEDs along the way. Iraq’s Prime Minister Haider al-Abadi said on Tuesday that safe exit routes have been secured, but the UN’s special rapporteur on IDPs has cautioned that such arrangements have not been given enough attention. That should be high priority.

Iraqis will be screened at security checkpoints to ensure that ISIS fighters do not escape among ordinary civilians. Men and boys over the age of fourteen will receive special scrutiny before they can be transported away from the frontline. Security concerns are legitimate and screening measures are necessary, but checkpoints should not be used to keep civilians from reaching safety. The administration should use its influence to ensure that screenings are carried out in a transparent manner by trained Iraqi soldiers (not Shia militias), and that humanitarian actors have unfettered access to the facilities where they are conducted.

Taken together, these steps can help the international community—and Iraqis themselves—manage the operation’s humanitarian consequences. If we fail to do that, a battlefield win may eventually come to seem like a strategic loss.

Jessica Brandt is an associate fellow in the Foreign Policy program at the Brookings Institution. Her recent work focuses on the refugee crisis.