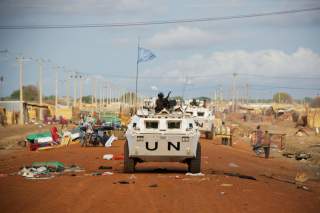 Though mired in the depths of the Cold War, the latter half of the twentieth century was a period in which the standard of living across the globe rose substantially. Many of the technological and industrial advancements during this period have been reliant on our ability to increasingly obtain, harness and capitalize upon myriad natural resources, and while these seemingly abundant natural resources have spurred growth in much of the world, they are often found in some of the world’s most fragile social, political and ecological regions. Indeed, natural resource–rich states often find themselves at the bottom of the Failed States Index. To complicate matters, from 1950-2000 over 90 percent of the major armed conflicts occurred within countries containing biodiversity hot spots—biogeographic regions with a significant reservoir of biodiversity under threat from humans—located in western and eastern Africa, along the Mediterranean, the Caucasus, Southeast Asia and in large portions of Latin America. Wars are now less often fought in Europe among competing powers, but in their natural resource–rich former colonies, where the combatants often have local needs, grievances and goals. Twentieth-century international institutions have helped guide the world through a period of unprecedented growth. However, they have unsuccessfully addressed twenty-first-century threats such as rising inequality, intrastate conflict and global warming. Natural resources can serve as an impetus for conflict or cooperation, prolong a bloody conflict and play an essential role in the postconflict process. The emergent field of environmental peacebuilding—which integrates natural-resource management in conflict prevention, mitigation, resolution and recovery to build resilience in communities affected by conflict—offers contemporary strategies that can address the problems associated with natural-resource development in conflict-prone regions.

The Role of Natural Resources in Conflict

Conflict in the developing world frequently affects poor, mainly rural populations that struggle to maintain their access to resources upon which they rely to make a living. In its Millennium Development Assessment, the United Nations (UN) highlighted the human reliance on “provisioning” ecosystem services—water, food, nutrients, energy, construction materials—which provide individuals with goods and services upon which they are dependent and that are essential to their livelihoods and well-beings. Many developing countries depend heavily on natural resources for revenues, and control over natural resources can have significant implications for local communities in what are often poorly governed states.

Natural Resources as a Contributing Factor to Conflict Feasibility

Though rarely the leading cause for raising arms on a large scale, claims from competing stakeholders on natural-resource wealth or for access to a scarce resource, amid other sociopolitical factors, can increase the feasibility and likelihood of conflict. Guatemala, Nepal, and Sierra Leone all saw inequitable access to land emerge as an underlying cause of their respective conflicts. High-value resources such as oil, gas or minerals can support secessionist movements and other nonstate groups that seek to control and develop a regional economy; natural resource–wealth sharing has been a significant grievance in the ongoing crisis in Yemen, during the South Sudanese independence movement and in the uprising in Papua New Guinea over copper revenues.

Natural Resources as Fuel for Conflict

Intrastate conflicts often involve multiple local and regional belligerents—see the Democratic Republic of the Congo, Yemen, Sudan—that all require means to purchase weaponry, pay soldiers and secure loyalties. Such revenue-raising can be implemented through “taxing” the existing industry, or by a group taking over direct control of a natural resource. Wealth from conflict-resources have had a significant impact on the conflicts in Sierra Leone (diamonds), Liberia (timber) and Afghanistan (poppy).

In the midst of a conflict, as groups seek to weaken their adversaries, natural resources and the environment can be the victim of both intentional and collateral damage, as occurred in Colombia when FARC rebels spilled 2 million barrels of oil throughout the Andean watersheds and tropical wetlands after attacking pipeline infrastructure. The United Nations Environment Programme (UNEP) notes that refugees and internally displaced persons (IDPs) can also adversely affect the environment, as they put increased pressure on new areas as they flee conflict zones.

Just as conflict has changed in the post-WWII era, so, too, have peacebuilding strategies adapted to reflect the values and needs of those in contemporary conflict zones. Natural resources can mold the conditions that often increase conflict feasibility, and the wealth generated from their development can prolong and complicate conflicts. If natural resources can have such an impact on a conflict, what impact can they have in conflict prevention or in reconciliation? The growing environmental peacebuilding community of practice—led by the UNEP, the Environmental Law Institute (ELI), McGill University and the University of Tokyo—is beginning to more effectively address the role that natural resources have on conflict-affected regions by integrating environmental and natural-resource management with traditional peacebuilding, conflict prevention, mitigation, resolution and recovery to help communities that are vulnerable to resource-conflict become more resilient to future crises. Most environmentally and ecologically conscious peace initiatives fall into one of three partially overlapping categories:

–  Initiatives designed to prevent conflicts that are directly related to the environment;

–  Efforts to initiate and sustain a dialogue on transboundary environmental cooperation, including the creation of Transboundary Protected Areas (TPAs); and

Cooperation between hostile parties around environmental concerns and equitable natural-resource development is intended to create peace dividends by creating frameworks that ensure all communities in a state are resilient and incentivized to contribute to long-term peace and stability initiatives. UN General Secretary Ban Ki-moon highlighted the importance of integrating natural resources into peacebuilding in his 2010 Progress Report on Peacebuilding in the Immediate Aftermath of Conflict, where he stated that natural resources are an aspect “of increasing concern where greater efforts will be needed” and called on member-states to make “natural resource allocation, ownership and access an integral part of peacebuilding strategies.” Much research has been conducted on the role that natural resources play in the onset and during an ongoing conflict, but less research has been conducted as to how they can be used in postconflict settings. States emerging from violent conflict face an estimated 44 percent chance of returning to conflict within ten years, and natural resource–related conflicts relapse at a significantly higher rate, signifying that more-effective approaches to postconflict peacebuilding are urgently needed.

Addressing Conflicts in the Twenty-First Century

Despite the cost to local populations and the environment, conflicts in natural resource–rich regions persist, often enriching the most powerful at the expense of the weakest. The extraction and consumption of natural resources has resulted in a warming planet, while conflicts in biodiversity hotspots have compounded the problem. However, just as natural resources can negatively affect conflict, they can also have substantial impacts on conflict prevention, stabilization and recovery. Intrastate conflict in natural resource–rich states will continue to flare up in the twenty-first century, and environmental-peacebuilding strategies must be implemented if the cycle of conflict is to end. If resource-rich states are to prevent future conflicts, they must consider not only economic, structural, political and social factors, but also ecological factors when determining policies that will lead to long-term stability and prosperity for their citizens.

Daniel Curwin is a graduate student in the Master of Environmental Management program at the University of New Brunswick. He tweets at @dcurwin.