The Roots of Hillary's Infatuation with War 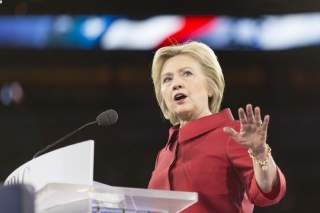 IN THE early 1970s, Hillary Clinton was a familiar face in the left-liberal milieu she had cast her lot with: a volunteer for the Yale Law School watchdog committee to monitor fairness in the trial of the Black Panther leader Bobby Seale; a worker for Marian Wright Edelman’s Washington Research Project (the precursor of the Children’s Defense Fund); a member of the legal staff of the Nixon impeachment inquiry. In one cause, however, she was mostly absent and unaccounted for: the protest against the Vietnam War. A friend of the Clintons, Greg Craig, told the New York Times reporter Mark Landler that while others in their circle were “heavily involved” in antiwar activism, “I don’t remember Hillary having much to do with that.” Clinton gave two pages to the war in her memoir Living History. She sympathized there with the burden of responsibility borne by President Johnson for “a war he’d inherited,” which turned out to be “a tragic mistake.” Johnson is her focus: the man of power who rode a tiger he could not dismount. On a second reading, “mistake” may seem too light a word to characterize a war that destroyed an agrarian culture forever and killed between one and three million Vietnamese. “Mistake” is also the word that Hillary Clinton has favored in answering questions about her vote for the Iraq War.

Like every Democrat who has run for president since 1960, Clinton sometimes talks as if she wished foreign policy would go away. A president’s most important responsibility, she agrees, is to strengthen the bonds of neighborhood and community at home, to assure a decent livelihood for working Americans and an efficient system of benefits for all. Yet her four years as secretary of state—chronicled in a second volume of memoirs, Hard Choices—have licensed her to speak with the authority of a veteran in the world of nations. War and diplomacy, as that book aimed to show, have become an invaluable adjunct to her skill set. Clinton would want us to count as well a third tool besides war and diplomacy. She calls it (after a coinage by Joseph Nye) “smart power.” Smart power, for her, denotes a kind of pressure that may augment the force of arms and the persuasive work of diplomacy. It draws on the network of civil society, NGOs, projects for democracy promotion and managed operations of social media, by which the United States over the past quarter of a century has sought to weaken the authority of designated enemies and to increase leverage on presumptive or potential friends.

Smart power is supposed to widen the prospects of liberal society and assist the spread of human rights. Yet the term itself creates a puzzle. Hillary Clinton’s successful advocacy of violent regime change in Libya and her continuing call to support armed insurgents against the Assad government in Syria have been arguments for war, but arguments that claim a special exemption. For these wars—both the one we led and the one we should have led—were “humanitarian wars.” This last phrase Clinton has avoided using, just as she has avoided explaining her commitment to the internationalist program known as “Responsibility to Protect,” with its broad definition of genocide and multiple triggers for legitimate intervention. Instead, in a Democratic primary debate in October 2015, she chose to characterize the Libya war as “smart power at its best.”

The NATO action to overthrow Muammar el-Qaddafi, in which Clinton played so decisive a role, has turned out to be a catastrophe with strong resemblances to Iraq—a catastrophe smaller in degree but hardly less consequential in its ramifications, from North Africa to the Middle East to southern Europe. The casus belli was the hyperbolic threat by Qaddafi to annihilate a rebel force in Benghazi. His vow to hunt down the rebels “like rats” door to door could be taken to mean a collective punishment of inhabitants of the city, but Qaddafi had marched from the west to the east of Libya, in command of an overwhelming force, without the occurrence of any such massacre, and the Pentagon and U.S. intelligence assigned low credibility to the threat. Clinton took more seriously an alarmist reading of Qaddafi by Bernard-Henri Lévy, Nicolas Sarkozy, David Cameron, Susan Rice and Samantha Power, and chose to interpret his threat as a harbinger of “genocide.”

Landler, in his book Alter Egos on the Clinton-Obama relationship, joins the consensus that has lately emerged from the reporting of Patrick Cockburn, Anne Barnard and other journalists on the ground. “Libya,” Landler writes, “has descended into a state of Mad Max–like anarchy”; the country is now “a seedbed for militancy that has spread west and south across Africa”; it “has become the most important Islamic State stronghold outside Syria and Iraq”; “it sends waves of desperate migrants across the Mediterranean, where they drown in capsized vessels within sight of Europe.” Clinton’s most recent comments, however, leave no doubt that she continues to believe in the healing virtue of smart power. The belief appears to be genuine and not tactical.

FOLLOW HER definition a little further and a host of perplexities arise. Cyber war could presumably be justified as a use of smart power, on the Clinton model, since it damages the offensive capabilities of a hostile power in an apparently bloodless way. Shall we therefore conclude that the deployment of the Stuxnet worm against Iran’s nuclear program was an achievement of smart power? Or consider a related use that would disrupt the flow of water or electricity in a city of three million persons controlled by a government hostile to the United States—an action aimed at stirring discontents to spur an insurrection. Could that be called smart power? We approach a region in which terminological ingenuity may skirt the edge of sophistry; yet this is the rhetorical limbo in which a good deal of U.S. policy is conceived and executed.

Clinton also plainly has in view the civil associations that we subsidize abroad, and the democracy-promotion groups, funded indirectly through USAID, the National Endowment for Democracy, Freedom House and other organizations. The nonviolent protests that turned bloody in Tahrir Square in Cairo, and in the Maidan in Kiev, received indications of American support by means both avowed and unavowed—a fact acknowledged by Victoria Nuland (assistant secretary of state for European and Eurasian affairs) when in December 2013 she said that more than $5 billion had been spent on democracy promotion in Ukraine since 1992. If the story of the Syrian Civil War is ever fully told, we are likely to discover that the early “liberal” or “moderate” rebels were encouraged in their misreading of U.S. intentions through social-media messaging approved by forces within the U.S. government.

In Ideal Illusions—a study of the history of NGOs, the international culture of rights and U.S. foreign policy—James Peck noticed how the responsibilities of the caretakers of human rights had expanded after the 1970s “from prisoners of conscience to the rights of noncombatants to democratization to humanitarian intervention.” It is the last of these elements that completes the R2P package; and Hillary Clinton is among its warmest partisans. The Western powers have a moral obligation to intervene, she believes, especially when that means guarding the rights of women and assuring the welfare of the neediest children. Her mistakes in the cause have been not tragic like President Johnson’s in Vietnam but, as she sees them, small, incidental and already too harshly judged. One ought to err on the side of action, of intervention. And military intervention in this regard bears a likeness to the “community intervention” that may save the life of a child in an abusive family.

The bombing, invasion and occupation of Iraq in 2003 were, among other things, an experiment to prove the neoconservative strategy of “force projection.” The experiment did not work out as planned. By contrast, the test for liberal interventionists was Kosovo, and popular memory has abetted the legend that Kosovo was a success. Thus Anne-Marie Slaughter was able to write in a tweet regarding the Munich Security Conference of February 2014: “Contrast b/w Serb-Kosovo panel this morning & ME panel now at #msc50 so striking; in Balkans US was willing to ACT w/ diplomacy AND force.” Recall that, in order to create the nation of Kosovo, NATO acted against the nation of Yugoslavia with smart power whose leading articulation was seventy-seven days of bombing. The satisfied pronouncements on Kosovo and Libya that emanate from liberal interventionists show a striking continuity. As a director of policy planning in Clinton’s State Department, Slaughter had written to her boss three days after the start of the NATO bombing of Libya: “I have NEVER been prouder of having worked for you.”

The truth is that the pretext for military intervention was almost as thin in Yugoslavia as it was in Libya. There, too, genocide was said to be in progress—the slaughter of tens of thousands of ethnic Albanians—but the reports were chimerical. In First Do No Harm: Humanitarian Intervention and the Destruction of Yugoslavia, David Gibbs concluded that approximately two thousand had been killed before the NATO bombing; whereas, during the bombing itself and in retaliation for it, Serbian security forces killed approximately ten thousand. Given the status of the episode in liberal mythology, the treatment of Kosovo in Living History is oddly minimal: less than a paragraph, all told, scattered over several chapters. Living History was published in 2003; and it seems possible that Clinton had an inkling of the mob violence that would break out in March 2004 in the nationwide pogrom against the Serbs of Kosovo—violence that would lead in early 2016 to the construction of tent cities in the capital, Pristina, and the firing of tear gas canisters in parliament to protest the abridgment of the political rights of the remaining ethnic minority. The aftermath of the Kosovo intervention has recently entered a new chapter. “How Kosovo Was Turned Into Fertile Ground for ISIS” was the astute headline of a New York Times story by Carlotta Gall, on May 21, 2016. Gall’s opening sentence offers a symptomatic tableau: