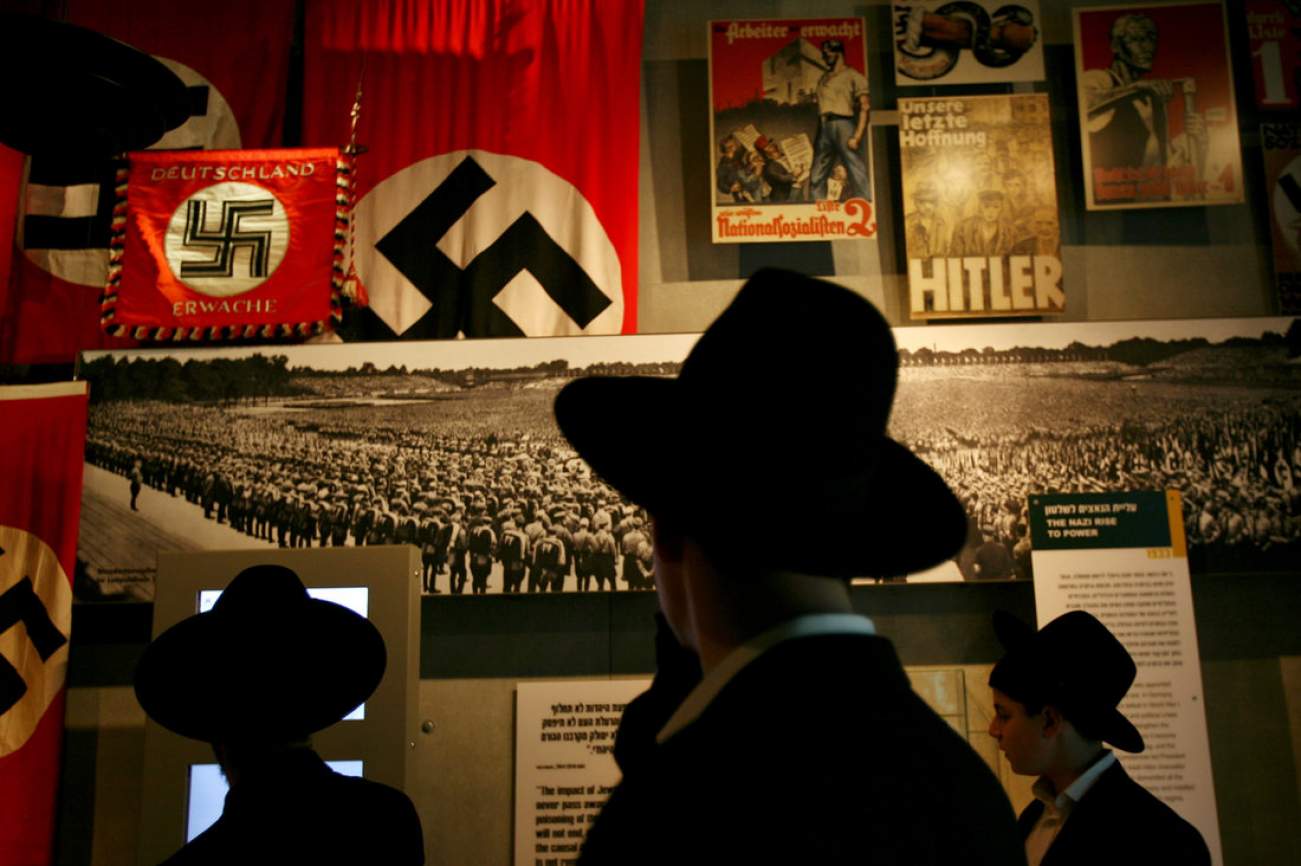 The Nazis’ anti-Semitic conspiracy constituted for them a paranoid, explanatory narrative that seemed to solve key riddles of history. Why did Britain ally with the communist Soviet Union after Germany attacked in June 1941? Why did Roosevelt help the English and do all he could to prevent an early Nazi victory? Why did an alliance emerge between the Soviet Union, on the one hand, and the arch-capitalist societies, England and the United States, on the other? Why did the anti-Hitler coalition persist even after 1943, as the Red Army began to move towards and then into Europe and Germany?

WITH AN internal consistency that proved immune to empirical refutation, Hitler’s conspiracy theory appeared to account for a central paradox of the Second World War in Europe, namely how the “unnatural alliance” between the Soviet Union and the Western democracies emerged and persisted. In the eyes of common sense, Franklin Roosevelt and Churchill had decided to make a pact with the lesser evil of Stalin to defeat Hitler. From the perspective of Nazi anti-Semitic propaganda, the Western-Soviet alliance and the United States’ entry into the war were two powerful pieces of evidence that international Jewry had created and sustained the anti-Hitler coalition.

This narrative emanated foremost from Hitler himself. Goebbels elaborated it in weekly essays and radio addresses. Otto Dietrich, the chief of the Reich Press Office, worked every day in Hitler’s office and presented him with a daily digest of the international press every morning. Hitler then offered suggestions, which Dietrich conveyed as orders to his staff in Berlin. They in turn elaborated these into Presseanweisungen—press directives—to be handed out at a daily noon “press conference.” They were telexed to editors at hundreds of newspapers and periodicals each day or week. Journalists and editors who did not follow the directives risked losing their jobs or worse. Government control of the press was thus a daily and highly detailed exercise in dictatorial control.

The directives included broad themes regarding the power of the Jews as the driving force of the anti-Nazi coalition, as well as detailed instructions about word choice. For example, in the Zeitschriften-Dienst of June 13, 1939, the Press Office instructed editors not to use the term “anti-Semitism” because doing so undermined efforts to establish friendly relations with the Arab world. Instead the terms to describe Nazi policy were “defense against the Jews” or “hostility to the Jews” (Judengegnerschaft), while that for the Nazis themselves was Judengegner (“adversaries of the Jew”).

From his famous prophecy about the war and Jews on January 30, 1939, to his last will written in the Berlin bunker in April 1945, Hitler himself was key to the conspiracy narrative. In the years following World War I, Hitler denounced the Jews as alien to the German nation, and the cause of Germany’s problems from defeat to depression. Between 1920 and 1939, often in the most vicious terms, he called for the “removal of the Jews from the midst of our people.” Before 1939, Hitler paraded his violent hatred of the Jews and his determination to banish them from public life, the professions and the economy, deprive them of German citizenship and then, with force if need be, extrude them from Germany. Yet from January 1933 to January 1939, through six years of escalating anti-Semitic persecution, he did not declare his intention to exterminate the Jews of Europe. He first did so on January 30, 1939, when, in a speech to the Reichstag, he publicly threatened to “exterminate” all the Jews of Europe if “international finance Jewry inside and outside Europe” provoked a world war—the very same war, in fact, that he at that moment was planning to unleash.

Hitler publicly repeated the genocidal prophecy on at least seven different occasions between January 30, 1939 and February 24, 1943. He was clear and blunt, not euphemistic or vague, regarding this threat. As if to underscore the link in his own mind between the war and his policies toward the Jews, on January 30, 1941, he erroneously dated the first utterance of the prophecy as September 1, 1939, the day he began the invasion of Poland.

In the November 16, 1941 issue of the weekly journal Das Reich, Goebbels published “Die Juden sind schuld” (The Jews Are Guilty). By then, according to leading historians of Holocaust decisionmaking, Hitler had ordered Himmler to expand the mass shootings of Jews that took place on the eastern front in summer and early fall 1941 into a continental program of genocide against the Jews of Europe. The text marks the first time that a leading official of the Nazi regime publicly announced the “extermination” (Vernichtung) of European Jewry. The if-then, hypothetical structure of Hitler’s famous prophecy of January 1939 gave way to an assertion of ongoing action. Three weeks before the Japanese attack on Pearl Harbor, Goebbels said that the historical guilt of world Jewry for the outbreak and expansion of this war had been so extensively demonstrated that there was no need to waste any more words about it. They had “wanted their war,” and now they had it. Goebbels describes an active subject, “international Jewry,” on the offensive against an innocent, victimized German object. Goebbels puts it as follows:

“By unleashing this war, world Jewry completely misjudged the forces at its disposal. Now it is suffering a gradual process of annihilation which it had intended for us and which it would have unleashed against us without hesitation if it had the power to do so. It is now perishing as a result of its own law: An eye for an eye, a tooth for a tooth. In this historical dispute every Jew is our enemy, whether he vegetates in a Polish ghetto or scrapes out his parasitic existence in Berlin or Hamburg or blows the trumpets of war in New York or Washington. Due to their birth and race, all Jews belong to an international conspiracy against National Socialist Germany. They wish for its defeat and annihilation and do everything in their power to help to bring it about.”

The Jews had started the war. They were “now” undergoing a “gradual process of extermination,” one they had originally intended to inflict on Germany.

Hitler committed suicide in his bunker in Berlin on April 30, 1945. On April 29, he had written his “Political Testament.” He wrote that it was “not true that I or anyone else in Germany wanted war in 1939. It was desired and launched exclusively by those international statesmen who were either of Jewish origin or who worked for Jewish interests.” The “truly guilty party of this murderous battle is Jewry!” To the end, he persisted in the paranoid logic of innocence, irresponsibility and projection. The logical conclusion of Hitler’s conspiracy theory was that international Jewry, in the form of the anti-Hitler coalition, had won the Second World War.

Like the traditions of white racism towards blacks, Nazi attitudes towards the peoples of eastern Europe, Poland and the Soviet Union rested on notions of racial superiority. But here again, it was a racism not based on color but on inferiorities said to emerge from membership in particular nations and ethnicities. Yet the goal of Lebensraum in the east was territory that was cleared of much of its native population. Those who remained would be colonial subjects dominated by Germans who settled in the east. Had the Nazis won the Second World War, they had plans to classify many millions more of the citizens of eastern Europe as “excess eaters.” The massive death toll on the eastern front, and the horrific toll of death and suffering in the history of African American enslavement, illustrate how conventional racism, juxtaposing superior against inferior peoples, which fueled both phenomena, had deadly consequences.

WHY DID the Nazis accuse the Jews, rather than an international organization like the Catholic Church or the communities of Protestant believers dispersed among many different countries, of being the masterminds of an anti-German conspiracy? Why didn’t they implement a “Final Solution” of the black, Polish, French or any other national, religious or ethnic “question”? If the Nazis were conventional racists, why did they make great efforts to seek support from Muslims both in Europe and in North Africa and the Middle East? Posing the question requires a historian of Nazi Germany and the Holocaust, or it at least impels this historian, to lift a gaze beyond the famous twelve years or even the century preceding them and place them instead into the far longer continuities of European history, especially the history of Christian theological anti-Judaism. Hitler’s decision to murder the Jews of Europe, the enthusiastic participation of thousands of German officials, collaboration by many other Europeans and the indifference of millions cannot be understood without taking seriously the name the Nazis gave to the endeavor: “Final Solution of the Jewish Question in Europe.” The denial of the Jews’ humanity was, to as diverse a group of observers as Hannah Arendt, Konrad Adenauer and George Mosse, due to the anti-Christian, secular elements of Nazi racism. Yet the modern choice of the Jews—and not others—as the international, murderous but devilishly clever world conspirator depicted in the Protocols of the Elders of Zion and amplified to millions in Hitler’s prophecy speeches and Nazi propaganda of 1939–43 is historically inexplicable without taking into account the Western tradition of anti-Judaism that David Nirenberg has recently examined.