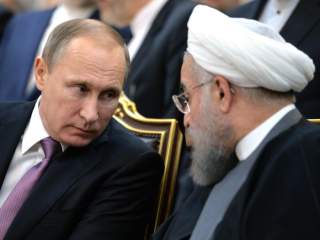 The relationship between Russia and Iran has come to the fore because of their coordination on the battlefield in Syria. A recent article in the Daily Beast noted President Vladimir Putin’s “fondness” for Iran, while another from Al-Monitor argued that cooperation will extend beyond Syria as “Moscow will seek to expand its regional role through coordination with Iran and Hezbollah.” However, Russian-Iranian cooperation is not as close as it appears to be in many arenas, and the relationship has built-in limitations, due to divergences of interest even on issues that are thought to foster cooperation.

The idea of a Russian-Iranian alliance makes sense to many for four main reasons. First, Russia and Iran have a shared interest in disrupting the U.S.-dominated post–Cold War order in the Middle East. Second, the Russians were seen as leaning towards Iran during the nuclear negotiations because they supported Tehran’s nuclear program, by building reactors in Iran and pushing for more favorable terms for sanctions relief during Iran’s negotiations with P5+1. Third, Iranian and Russian interests in Syria have converged into a coordinated military campaign to prop up the regime of Bashar al-Assad. Fourth, Russia hopes to exploit newfound economic opportunities in Iran now that sanctions have been lifted. However, a closer look at these supposed convergences of interest indicates that they are plagued with limitations and differences.

It is true that both Russia and Iran would like to expand their regional influence at the expense of overwhelming U.S. dominance. Soon after the collapse of the Soviet Union, Russia began to perceive the U.S.-dominated unipolar world order as inevitably clashing with its basic national interests; this was true in the Middle East as in other regions. Russia’s foreign and prime minister during 1996–99, Yevgeny Primakov, who was also a leading expert on the Middle East, argued that Russian involvement and counterbalancing against the United States in this region is a crucial tool in reasserting Russia’s global interests. Although Russia’s involvement in the Middle East was limited during Primakov’s tenure in government, this type of thinking continues to shape Russia’s foreign policy. As the United States unquestionably emerged as the dominant power in the region in the 1990s, Iranian and Russian allies in the region were few and far between. Logic and history dictate that Iran and Russia will continue to work to reorient Arab states towards their own orbit and further away from the United States.

Yet when Russia and Iran experienced periods of closer relations with the United States, these thaws have been accompanied by a cooling of relations between Tehran and Moscow. This was particularly apparent from Russia’s side. Russia’s interest in counterbalancing the United States in the global arena aims to achieve parity, or U.S. recognition of Russian interests; if parity is achieved, then the tactic will have served its purpose. Iran is a mere tool in this tactic. Hence, in a period when Russia’s relations with the United States improved, Russia’s interest in forming an anti-U.S. alliance with Iran diminished. For example, in 1995, a deal between Russian Prime Minister Chernomyrdin and U.S. Vice President Gore for cooperation between the American and the Russian military industries led to a cooling in Russia’s relations with Iran.

When it comes to Syria, Tehran has taken steps to reinforce the impression that it is cooperating closely with Moscow. For example, Iran’s deputy foreign minister for Arab and African affairs implied that there was close coordination between Russia and Iran when he spoke for both countries saying that they would use “all means” to solve the Syrian crisis. However, it is doubtful whether this accurately reflects the degree to which they have common interests beyond some vague notion of the survival of the Syrian regime.

Despite the fact that Russia and Iran are conducting military campaigns on behalf of the Assad regime, they have radically different designs for Syria. Russia is interested in preventing the fall of the Alawite-led Assad regime and preserving a client state in the region. Iran is interested in Syria becoming completely reliant upon and under the influence of Tehran. These diverging views of a future Syria translate into the actors’ different modi operandi in their involvement in the War. Russia concentrates on the preservation of the Syrian government by propping up its institutions—specifically, reinforcing the Syrian Arab Army. Because Moscow and Damascus have institutionalized strong military and cultural ties over the course of four decades, Russia is interested in helping to preserve the Syrian regime. Hence, Bashar al-Assad himself is not a critical element for Moscow to maintain a Syrian client state. In fact, if Assad steps down from his position in Syria, it is more likely that Syria will emerge from the war as a viable unit to serve Russian interests in the region. Therefore, Russia has made it clear that is not “inextricably bound” to Bashar al-Assad.

Meanwhile, Iranian involvement in the Syrian civil war concentrates on perpetuating the rule of Bashar al-Assad, while undermining the Syrian government’s authority and deepening its dependence on Iran. Iran’s unwillingness to part from Assad is due in no small part to the fact that Iran's newfound influence in Damascus is tied to Assad, who is personally indebted to Iran for bailing him out militarily and economically during the civil war. At the same time, the Iranians are diffusing the authority of the Syrian state by training, indoctrinating and arming over one hundred thousand local militia members in the decentralized National Defense Forces. In doing this, Iran hopes to build up local grassroots client militias whose allegiance is first and foremost to their principal in Tehran, rather than the Syrian government.

In light of their divergent views on the future of Syria and their different strategies in the war, it is clear that Russians do not see Iran as an ideal partner in Syria. Their differences regarding Syria will likely only become more apparent if a permanent ceasefire is reached and the Syrian regime’s two largest benefactors are forced to make concrete decisions regarding Syria’s future.

Russia and Iran also appear closely allied on the issue of Iranian nuclear ambition. However, nuanced examination reveals that on that issue, too, Russian cooperation with Iran was limited. Russia’s involvement in the construction of Iranian nuclear reactors seemed to support the idea that it has a vested interest in the Iranian nuclear cause; however, Russia emphasized throughout the process that it opposed allowing Iran to attain military nuclear capabilities. Russia proved that, despite the seeming contradiction, it opposed Iranian efforts to build a bomb while helping to build Iranian nuclear facilities. On numerous occasions, Russia dismissed Western and Israeli claims that Iran was developing nuclear weapons. Moscow warned against military actions by the United States or Israel against the Iranian program, declaring that such actions “would be harmful, literally disastrous for regional stability.”

At the same time, Russia cooperated with the West in stopping Iran from achieving nuclear weapons during the P5+1 negotiations. Former senior Obama administration official Philip Gordon said recently that once Russia learned of the secret Iranian nuclear site in Fordo in 2009, it became a cooperative partner with the United States in stopping the Iranian march towards the bomb. Russia supported UN sanctions against Iran, as well as the arms embargo and missile sanctions. It also played a collaborative role in the JCPOA, even in the wake of the crisis in Ukraine. Gordon attributed the Russian cooperation to Moscow’s being unnerved by the imminent possibility of a nuclear Iran. One lesson from this is that once Russia was included in the negotiation process and could play the role of a political arbiter considered equal to world powers such as the United States, China and the EU, Russia played cooperatively to prevent Iran from acquiring nuclear weapons, at the expense of its relations with Iran.

There has also been a great deal of noise about the opportunities for economic cooperation between Iran and Russia, now that nuclear-related sanctions have been lifted. Russia is primed to sell billions of dollars in weaponry to Tehran. But this intersection of economic and military interests is subject to limitations; though Russia has sold Iran tanks and other conventional weapons in the past, it appears wary of selling Iran more powerful weapons systems. For example, since the contract was signed in 2007, Moscow has gone back and forth with Tehran many times regarding the delivery of the S-300 air defense system. Most recently, there were rumors that Russia once again postponed delivery of the S-300 because Israel supplied evidence that Iran had broken its promise not to deliver sophisticated Russian weaponry to Hezbollah. Whether this was simply an excuse to avoid delivering the S-300, the Kremlin’s actual reason for freezing delivery or mere baseless speculation, it is clear that Russia is far behind even delivery estimates made in March 2015. The nearly ten-year delay in carrying out the deal calls into question the Russians’ willingness to transfer the systems to Iran. There are no clear indicators of Russia’s motivation for these delays, but it seems that Russia might be concerned about allowing its neighbor to the south to acquire a highly sophisticated system that could disrupt the balance in the region.