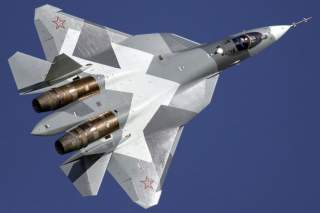 The Russian Sukhoi T-50 PAK-FA stealth fighter could prove to be a formidable competitor to American fifth-generation combat aircraft such as the Lockheed Martin F-22 Raptor and F-35 Joint Strike Fighter. Indeed, in some measures, the new Russian warplane will exceed both U.S.-built jets, but the PAK-FA is not without its flaws.

“The analysis that I have seen on the PAK-FA indicates a pretty sophisticated design that is at least equal to, and some have said even superior to U.S. fifth-generation aircraft,” former U.S. Air Force intelligence chief Lt. Gen. Dave Deptula told the National Interest. “It certainly has greater agility with its combination of thrust vectoring, all moving tail surfaces, and excellent aerodynamic design, than does the F-35.”

Indeed, the PAK-FA appears to be optimized for the air-superiority role like the F-22 more so than the multirole, strike-optimized F-35. Like the Raptor, the PAK-FA is being designed to fly high and fast to impart the maximum amount of launch energy to its arsenal of long-range air-to-air missiles—which would greatly increase the range of those missiles.

“Performance-wise it certainly looks to compete with the Raptor,” one senior military official with extensive experience on U.S. fifth-generation fighters told the National Interest.

(What You May Also Like: 5 NATO Weapons of War Russia Should Fear)

Like the F-22, the Russian machine is expected to be able to cruise supersonically for extended periods of time—probably faster than Mach 1.5. The aircraft’s maximum speed should be greater than Mach 2.0—assuming its low observables coatings can handle the stress.

However, unlike the American fifth-generation aircraft, the PAK-FA places less emphasis of stealth, and much more emphasis on maneuverability. While it could compete with the Raptor in terms of raw kinematic performance, the PAK-FA greatly exceeds the F-35. And that performance margin might increase.

(What You May Like: 5 Russian Weapons of War NATO Should Fear)

The Russian aircraft is currently powered by modified versions of the Su-30 Flanker’s engines called the Izdeliye 117 or AL-41F1, which produce about 33,000 pounds of thrust. The engine, which runs far hotter than the original AL-31 engines from which it was derived, is not proving to be as reliable as initially hoped. But the current engines are only temporary. Later production variants of the PAK-FA are expected to be powered by a new engine called the Izdeliye 30, which should enter service in 2020.

The Russian jet is also equipped with a powerful avionics suite, which is an evolution of Sukhoi’s work on the Flanker-series fighters. “Indications are that the avionics are derived from the Su-35S with the addition of a very high power-aperture X-band multimode AESA radar,” Deptula said.

In addition to radars and electronic support measures, the PAK-FA is equipped with infrared search and track capabilities.

While the Russians have made enormous leaps in their sensor capabilities, U.S. warplanes still hold the edge in terms of sensor and data-fusion, which is critical for modern warfare. “The real question is can the Russians achieve the same degree of data fusion and networking capabilities of the F-22A and F-35—right now I’d put my money on the U.S. and our allies in that regard,” Deptula said.

(You May Also Like: 5 Ways Russia Could Help China's Military Become Even Deadlier)

In fact, the PAK-FA’s lack of true sensor fusion and comprehensive data links that are on par with its American counterparts may prove to be its Achilles’ heel. U.S. strategists are moving towards an approach where every aircraft or surface ship can act as a sensor for any aircraft, ship or vehicle that carries a weapon. The launch aircraft might not even guide the weapon once it has been fired. The U.S. Navy is already implementing a construct called the Naval Integrated Fire Control-Counter Air (NIFC-CA) that would do just that. The Air Force, too, is working on something similar.

“In the future—while aerodynamic performance will continue to be important—speed, range and payload to a greater degree than maneuverability. Even more important will be the ability to ubiquitously share knowledge to the point that we have faster decision advantage than any adversary,” Deptula said. “This is the notion of the ‘combat cloud.’ It’s more about how we integrate the sensor-shooters that are resident in systems coming online, more than it is about new platforms.”

The senior military official agreed with Deptula’s assessment, but added that the PAK-FA has another vulnerability, too. The Russians generally do not have a requirement to fight inside a dense, highly advanced integrated air defense system (IADS) like a U.S. jet would. As such, while the PAK-FA does have stealthy features, it places far less emphasis on low observables technology than does the F-22 or F-35. “Its failure to prioritize stealth and sensor fusion make it vulnerable to both Western fifth-gen. fighters, certainly the F-22,” the official said. “When you look at the concept the USAF [U.S. Air Force] will apply with the F-22/F-35 team, the PAK-FA will run in to significant challenges.”

The Chinese, however, are a different story. “That scenario, by the way, is exactly why the Chinese see value in the J-20 and J-31 combo,” the senior official said.

In any case, while Russia might be able to develop a very capable fifth-generation fighter, there are questions as to whether the country can produce such a machine. The Soviet industrial base was always optimized to produce large quantities with relatively crude quality controls. However, stealth technology requires a level of manufacturing precision that Russia has never demonstrated before—especially after collapse of its industrial base in the years that followed the demise of the Soviet Union. “It has a long way to go before reaching IOC [initial operational capability],” the senior industry official said. “Both the Russians and Chinese have yet to ramp-up production of one of their new generation fighters. The Russians have to first resuscitate their aerospace industrial capacity…. and neither has the stealth technology, manufacturing, and operational experience like the U.S.”

Senior U.S. Air Force officials concurred with the industry official’s assessment. “I will mention that getting a fifth-gen. aircraft from brochure to fully functional and reliable is very difficult,” a senior Air Force official said. “They don't have as much experience as our industrial base with some of the capability they want in it and it is still pretty hard for us to do, so I predict growing pains in fielding.”

Comprehensively assessing the PAK-FA before it is fielded is a difficult proposition even for those with access to military intelligence data. “It's tough to tell until the PAK-FA goes into production,” another senior Air Force official said. “I doubt they'll be on par with our fifth-gen. fighters, but we don't have many and they'll likely overmatch any fourth-gen. [fighter like the F-15, F-16 or F/A-18.]”

Nonetheless, the United States has started to work on shaping the requirements for the next-generation successors to the F-22 and F-35 in the form of the Air Force F-X air-superiority fighter and the U.S. Navy’s F/A-XX next-generation strike fighter. But even before then, there are steps the Pentagon can take to mitigate the threat from Russian and Chinese stealth fighters.

“Fifth-gen. aircraft and information technologies are enabling new concepts of operation that we have yet to fully exploit. I’d suggest that is where we put our energy before spending a lot of time and money building another evolutionary fighter,” Deptula said. “LRS-B [Long Range Strike-Bomber], if properly designed for growth, will be the next major component of this concept than will be F-X and F/A-XX.”

Deptula said that fully integrating the Pentagon’s disparate weapons so that they function as a coherent whole would provide capabilities beyond what a new aircraft might provide. “Future developments in data sharing promise to dramatically enhance the way that combat effects are attained as individual aerospace assets are fully integrated with sea, land, space and cyber systems to form an omnipresent defense complex,” he said. “Individual systems connected together to form a self-forming/self healing ‘combat cloud’ and able to leverage their respective strengths, while simultaneously circumventing specific system weaknesses and vulnerabilities is where we need to be heading. This could well be the basis of the next ‘offset strategy’ that the [Secretary of Defense] and his deputy are now championing.”