The Russian Army's 5 Most Powerful Weapons of War 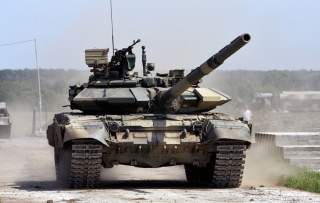 Curiously, Koalitsiya was originally to have been equipped with not one but two 152mm guns, a unique development would double its firepower to up to 16 rounds a minute for brief periods. For reasons unknown, the second howitzer appears to have been deleted from the delivery version.

Koalitsiya’s turret is covered with canvas, suggesting there are other improvements that the Russians would prefer to keep a surprise. Generally speaking, it appears larger and differently shaped than Msta’s. Self-propelled howitzers in general have changed relatively little in the last fifty years—most of the improvements electronic in nature—so it’s puzzling why the Russians would wrap the entire turret in canvas.

One baffling aspect of the Koalitsiya is that, like Msta, it appears to be based on a T-72/T-80 and not the Armata chassis. Although a familiar platform, this may make repairs difficult once the older tanks are phased out of service.