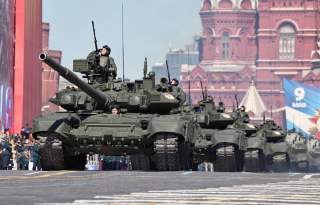 The Russian Army will induct a new family of armored combat vehicles collectively called the Armata next year to replace its existing armored war machines, according to Russian state media. Production of the new armored vehicles is expected to start at the beginning of 2015 in January and two dozen of the new machines are expected to participate in the Victory Day parade in Moscow next year—as America struggles with the future of its own armored combat vehicles.

“The first batch will be available next year. You will see them in Red Square on May 9,” Oleg Bochkaryov, deputy chairman of Russia’s military-industrial commission, told the state-run ITAR-TASS news agency on November 18.

Developed by the Uralvagonzavod (UVZ) Corporation in the remote city of Nizhny Tagil in the Ural Mountains, the Armata is being developed in multiple variants, including a main battle tank, infantry fighting vehicle, a heavy-armored personnel carrier, self-propelled artillery and two support vehicle variants. The Russian ground forces are expected show off two-dozen machines during the parade—half will be the main battle-tank variant, while the remainder will be the armored personnel-carrier variant.

The Armata will ultimately replace the Cold War–era T-64, T-72, T-80 and comparatively newer T-90 tanks by the 2030s—assuming the Russian government can pay for it. The Armata series will also replace the BMP-series infantry fighting vehicles and a host of other vehicles; production could go into the tens of thousands if Russia were able to replace its existing vehicles on a one-for-one basis.

According to ITAR-TASS, the main battle-tank variant will be armed with a 125-mm cannon—which has been the standard on Soviet-built hardware in the 1960s—but the weapon will be mounted on an unmanned turret. The crew will be housed in a separate armored compartment—which is a unique configuration for any modern main battle tank.

Some Russian media reports have suggested that the Armata’s armor is specifically being tailored to operate well in the Arctic Circle, an area of the world that is becoming increasingly important for that country’s embattled economy.

Further, in a marked departure from the usual Soviet practice, the Armata program appears to place a far higher priority on crew survivability than any previous Soviet or Russian tank. That could be because Russia is trying to transition from a Soviet-era, conscription-based force to a professional army where individual soldiers are not considered expendable.

As such, the Armata-series vehicles are being designed with a completely new armor layout and will have all-aspect protection, Vyacheslav Khalitov, Uralvagonzavod deputy general director, told the Russian News Service radio station. The crew will be separated from the vehicle’s fuel and ammunition stocks, Khalitov said. As such, it’s possible the internal configuration of the new vehicles bears more resemblance to Western machines such as the M1A2 Abrams or German Leopard 2A7+ than to older Soviet tanks.

Little else is known about the Armata project, save for the fact that everything appears to be proceeding more or less on schedule—if Russian reports are to be believed. “Everything is proceeding in line with the contract. Work is being done ahead of schedule. We get ahead of all schedules,” Oleg Siyenko, Uralvagonzavod general director told ITAR-TASS in September. Additionally, Siyenko said that Armata project is currently meeting all of the Russian military’s requirements.

(You May Also Like: Top 5 Fighter Aircraft of All Time)

However, the Armata might be proving to be more expensive than the Russian government expected. Bochkaryov told ITAR-TASS that the Armata’s price tag is currently too high. Nonetheless, the Russian government is expected to sign a three-year deal to build the Armata at a set price. “We will continue to work with them, because we disagree with Uralvagonzavod high price,” Bochkaryov told Russia Today, another state-run media outlet. According to ITAR-TASS, Uralvagonzavod officials have promised to reduce the price of the new vehicle.

Meanwhile, the U.S. Army has made several abortive attempts to replace the long-serving Bradley infantry fighting vehicle and the Abrams main battle tank. In the early 2000s, the Army launched the Future Combat Systems (FCS) as a family of lightweight vehicles that would replace the service’s heavily armored tanks, infantry fighting vehicle and self-propelled artillery and other machines.

The idea was to develop multiple vehicles based on a common 20-ton lightweight chassis with the same survivability as an Abrams, so that an entire brigade could be deployed in eighteen hours to anywhere on the planet. However, physics intervened. It quickly became obvious that a 20-ton vehicle could never hope to match the protection of a 70-ton tank—short of some sort of miraculous breakthrough.

The Ground Combat Vehicle program—meant to replace just the Bradley—followed the 2009 termination of the FCS effort, but that effort, too, was cancelled in February 2014 after the machine started to morph into an unwieldy and expensive behemoth. The current effort is called the Future Fighting Vehicle program—it’s too early to tell where that program is heading, however.

Meanwhile, there is no program to replace the Abrams main battle tank. The Army hopes to eventually build (or more precisely, remanufacture) a new version of the tank that will be called the M1A3 sometime around 2018.

However, in the long term, the Abrams needs to be replaced, one senior Army armor officer said. The 1970s-era design is at its limit for upgrades. The tank is all but tapped out for space, weight and power, he said. As currently envisioned, the Abrams will stay in service past 2050—by which time the design will be more than seventy years old. Meanwhile, the rest of the world continues to modernize their armor.