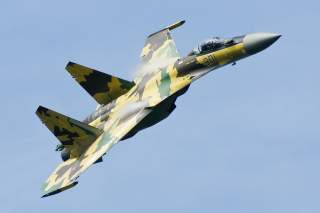 The Sukhoi Su-35S Flanker-E is the most potent fighter currently in operation with the Russian Air Force. The powerful twin-engine fighter, which is an advanced derivative of the original Soviet-era Su-27, is high flying, fast and carries an enormous payload. That, combined with its advanced suite of avionics, makes the Su-35 an extremely dangerous foe to any U.S. fighter, with the exception of the stealthy Lockheed Martin F-22 Raptor. That is one of the reasons the Chinese People’s Liberation Army Air Force is keen to acquire the new jet.

“It’s a great airplane and very dangerous, especially if they make a lot of them,” said one senior U.S. military official with extensive experience on fifth-generation fighters. “I think even an AESA [active electronically scanned array-radar equipped F-15C] Eagle and [Boeing F/A-18E/F] Super Hornet would both have their hands full.”

One U.S. Navy Super Hornet pilot—a graduate of that service’s elite TOPGUN school—offered a sobering assessment. “When taken as a singular platform, I like the Su-35’s chances against most of our platforms, with perhaps the exception of the F-22 and F-15C,” the naval aviator said. “I suspect the F/A-18E/F can hold it’s own and F-35 has presumed stealth and sensor management on its side.”

But one Air Force official with experience on the Lockheed Martin F-35 Joint Strike Fighter said that the Su-35 could pose a serious challenge for the stealthy new American jet. The F-35 was built primarily as a strike fighter and does not have the sheer speed or altitude capability of the Su-35 or F-22. “The Su's ability to go high and fast is a big concern, including for F-35,” the Air Force official said.

As an air-superiority fighter, its major advantages are its combination of high altitude capability and blistering speed—which allow the fighter to impart the maximum possible amount of launch energy to its arsenal of long-range air-to-air missiles.

The Su-35 builds on the already potent Flanker airframe, which in many respects already exceeded the aerodynamic performance of the Boeing F-15 Eagle. The Su-35 adds a lighter airframe, three-dimensional thrust vectoring, advanced avionics and a powerful jamming capability.

“Large powerful engines, the ability to supercruise for a long time and very good avionics make this a tough platform on paper,” said one highly experienced F-22 pilot. “It's considered a fourth gen plus-plus, as in it has more inherent capability on the aircraft. It possesses a passive [electronically-scanned array and it] has a big off boresight capability and a very good jamming suite.”

The addition of the electronic attack (EA) capability complicates matters for Western fighters because the Su-35’s advanced digital radio frequency memory jammers can seriously degrade the performance of friendly radars. It also effectively blinds the onboard radars found onboard American-made air-to-air missiles like the AIM-120 AMRAAM.

Further, the Air Force official added that even modernized versions of older jets would be in serious trouble against the new Flanker variant. “I'd say our fourth-gen AESAs aren't a big advantage,” said the official. “They're more to get us back in the game against jamming.”

But even the addition of AESA radars does not really solve the problem. “We—the U.S. Department of Defense—haven't been pursuing appropriate methods to counter EA for years,” said another senior Air Force official with experience on the F-22 Raptor. “So, while we are stealthy, we will have a hard time working our way through the EA to target the Su-35s and our missiles will have a hard time killing them.”

The Su-35 also carries a potent infrared search and track capability that could pose a problem for Western fighters. “It also has non-EM [electro-magnetic] sensors to help it detect other aircraft, which could be useful in long-range detection,” the Super Hornet pilot said.

Another of the Su-35’s major advantages is that it carries an enormous payload of air-to-air missiles. “One thing I really like about the Su-35 is that it is a high-end truck: It can carry a ton of air-to-air ordnance into a fight,” the Navy pilot said.

On paper, that makes the Su-35 an extremely capable platform, but as one highly experienced F-22 pilot pointed out: “Whether they can translate that into valid tactics remain[s] to be seen.”

Further, air warfare is far more complicated than comparing individual platforms—the sum total of the forces brought to bear have to be assessed in aggregate.

“It’s always sexy to compare one aircraft to another,” the naval aviator said. “The secret sauce is probably in our fighters and commensurate ‘strike’ or employment packages, to include AWACS, refuelling, and EM-capable platforms.”

Another highly experienced veteran fighter pilot added that much about the Su-35 and the capabilities of the Russian military remain unknown.

“You really don't know the capabilities of the weapons system or the skill level of the other side's pilots or their battle management system,” one former Air Force pilot with extensive experience with Soviet and Russian hardware said. “A physical platform is a shell of capability. It's what's inside that counts along with the command and control to execute. Our fifth-gen is pretty good. Weapons reliability and defensive suites might make the difference.”

The Navy Super Hornet pilot added to that point. “The question really comes down to numbers and tactical employment. Where does the fight go down? Are we talking a 1:1 ratio of Su-35 vs. F/A-18Es?” the veteran naval aviator asked. “I’d give the edge on tactical employment to Western-trained aviators for the time being, though other nations are working hard to close the gap.”

One of the Air Force pilots concurred. “Our training and skill of USAF pilots will keep us ahead of the game, but they are certainly closing the gap,” one of the Raptor pilots said.

Overall, it would be fair to assess the Su-35 as an extremely capable fighter—perhaps the best Russia or the Soviet Union has ever developed. “But it’s not a Raptor and will be hamstrung by the two key elements of fifth-gen war…stealth, and broad spectrum sensor fusion,” said the senior military official.