The Russian-German Relationship Is in Free Fall 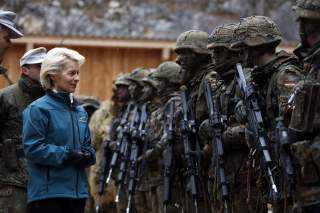 There are numerous tensions roiling U.S.-German relations at present, not least the oft-mentioned lack of personal chemistry and contrasting leadership styles among the German Chancellor Angela Merkel and President Donald Trump. Foremost now on the agenda, of course, is the extremely tricky issue of whether Germany can help to save what’s left of the Iran nuclear agreement after the detrimental and impulsive U.S. decision to withdraw. Also on the U.S.-German agenda, let’s not forget the saga of Volkswagen brazenly violating U.S. emissions standards that have cost the company billions. Trade tensions have emerged in an unprecedented way. And then there is, of course, the fact that Germany’s defense spending remains well under the NATO standard of 2 percent and seems unlikely to reach that threshold in the near future, despite more and more urgent American appeals. In addition, there is the issue of Nordstream 2, a proposed second pipeline under the Baltic Sea. The pipeline has been strongly opposed by the United States and other countries that are anxious about Moscow’s energy clout and how that leverage could impact European security.

Indeed, the Washington-Berlin-Moscow triangle is mired in such a dysfunctional set of tribulations that its parlous state is severely undermining global security more generally, not to mention the national interests of all three important countries. Among the most nefarious of these exertions is the peculiar attempt by The German Marshall Fund to play a leading role in Washington’s ever churning cauldron of the Russian influence scandal. Taken together with the Steele Dossier, one is almost tempted to call for an investigation of the “European influence scandal” in Washington, but these countries are likely hard pressed to compete with various Middle Eastern countries in the “dark arts” of influencing Washington politics. This Bear Cave column will not delve into the gutter to discuss these juvenile antics, but will instead focus on the substance of the all-important German-Russian relationship that has been foundering so badly for the last couple of years.

A recent article in the Russian press summarizes an interview by German defense minister Ursula von der Leyen. The headline hints at the truly disturbing trajectory for German-Russian relations: “The German Defense Ministry Calls for Speaking to Moscow from a Position of Strength [Минобороны ФРГ призывает говорить с Москвой с позиции силы].” In the original interview from Bilt am Sonntag, the Russian summary explains that von der Leyen asserts that “Putin does not respect weakness” and suggests that Berlin will “necessarily increase pressure on Russia [необходимо усилить давление на Россию].” She apparently cites Russia’s “annexation of Crimea,” as well as its actions in eastern Ukraine and Syria to justify this harder line.

The piece speculates as to the timing of von der Leyen’s remarks, noting that Germany has not succeeded in meeting the NATO 2 percent allocation on defense, and so perhaps Berlin has a particular “need to show that it is a reliable ally of the U.S. [надо показать себя надежным союзником Америки].” The piece also notes considerable opposition in the Bundestag to increased defense outlays, so it is suggested that von der Leyen’s speech could represent a kind of attempt to claim before the Americans and others that an effort was made, even if it was not realizable. Moreover, the Russian analysis suggests that the German Defense Ministry has witnessed some scandals recently with respect to maintenance and readiness issues, as well as involving personnel, such that von der Leyen’s comments could amount to “trying to cover up for past mistakes” [является попыткой скрыть собственные промахи].” Indeed, the article notes tellingly, for example, that “Last year, all six German submarines were out of order [В прошлом году вышли из строя все шесть немецких подводных лодок.]”

It is recognized in the Russian analysis that Germany is hardly a minor power, and that Berlin wields significant influence on the Russia policy of almost all the other countries of the European Community. And the piece is not entirely pessimistic in that it notes the new leader of the SPD, Andrea Nahles, has apparently commented recently that “We Germans, in particular, want to be good neighbors of Russia [именно мы, немцы, хотим стать для России хорошими соседями].” She is not alone in holding this view, so it seems. And that is hardly an irrational approach given what is reported to be up to 1.5 billion Euros in lost trade for German companies as a result of sanctions.

The critical Russia-German relationship has been in free-fall, more or less, since the onset of the Ukraine Crisis. Chancellor Angela Merkel might be given some credit for both helping to reach the Minsk Accord—thus taking the crisis back from the brink of all-out war in 2015—as well as bravely standing against reckless proposals to arm Kiev against Moscow. Yet otherwise, Berlin has permitted the issue to languish without any resolution in sight. While the people of Ukraine suffer in a protracted civil war, Eastern Europe drifts toward ever more precarious polarization, NATO and Russia gird for high-end warfare in the Baltics, and the major economies of Europe and Russia are weighed down by sanctions, Germany’s leaders seem to seem to be content with offering bromides like promoting a “rules-based order.” How is that working out? It’s well past time for a more pragmatic approach in Berlin—one that delivers for Germans, for European security and for all the many suffering people in Eastern Europe (and beyond), who are the victims of the latest cycle of East-West rivalry.

I am usually reluctant to offer advice to countries other than my own, but the urgent world situation suggests the need for definite reforms to Berlin’s approach and, contrary to conventional wisdom, these reforms do not actually require Germany “to spend more and take necessary risks.” Rather than counting on Washington to solve problems in Eastern Europe and the Middle East, Berlin must chart a new path. First and foremost, Germany should now actively prioritize the common European defense entity over NATO. Pentagon bureaucrats should not determine how much Germany spends on defense, and Germans are right to bristle at Washington’s ripostes on this issue. To state the obvious, Europeans are best able to understand European security and thus NATO should form just a “hedge” for very low probability scenarios rather than the main thrust of German (or European) security policy. On a related note, German support for the NATO mission in Afghanistan should be curtailed since stabilization efforts there have failed. Germany neither requires attack helicopters and snipers to fight Afghan insurgents, nor masses of tanks and fighters to take on Russia. Present outlays are quite sufficient.

That leads us to the second major reform, which should be a new and more mature approach to dealing with Russia. Such an approach recognizes above all that Germany does and will always carry the enormous weight of responsibility for assuring peace between Germany and Russia after the devastation and aggressive war it pursued 1939–45.

While some German policymakers had evidently hoped that a “sanctions approach” could be contrasted and enacted instead of a more militarized approach, the concept that severe economic pressure could be brought against Moscow without ratcheting up extreme national-security tensions has proven to be a fool’s errand. I will not rehash the details of the Maidan events in spring 2014, but no doubt the crisis partially resulted from European hubris that followed hard upon the NATO hubris of waves of NATO expansion that wise observers like George Kennan knew would fuel a new Cold War. Let’s not cry over spilt milk, but Berlin must urgently adjust its approach on Crimea as the key that will immediately ease tensions throughout Eastern Europe.

Russians have evidently not quite forgotten that a quarter million Soviet soldiers were lost fighting against the brutal Nazi siege of Sevastopol during the critical months of early 1942. In the month of June 1942 alone, more than twenty thousand tons of Luftwaffe bombs fell on the beleaguered defenders of the Russian fortress—a more intense bombardment than the Germans subjected to London, Rotterdam, or even Warsaw. The sad irony is that the brave defenders of Crimea against the German onslaught actually absorbed the hammer blows that helped to ensure that the Nazi war machine would lack the power to carry the day at Stalingrad just a few months later. Anyone with a remote familiarity with this essential history, which truly decided the fate of the modern world, can perceive the foul odor currently hanging over German foreign policy. Berlin insists on a rules-based order and will brook no compromise with Moscow over Crimea despite the history altering, criminal violence that Hitler visited upon that very place. And this is a place that saw yet another quarter million Russians fall in its defense about a century earlier—as recorded by Count Lev Tolstoy—so the situation is not exactly novel for European diplomats.

Perhaps Germany’s truculence on the issue of Crimea reflects the same bizarre impulse that causes Germans to stand patiently at a crosswalk when there is no vehicular traffic anywhere in sight—a phenomena this author witnessed many times when I lived in Germany myself for a time. But such rigidity is emphatically not a virtue in the practice of complex diplomacy and many countries, not least Germany itself, are now suffering as a result of current policies that fuel ever greater hostility in the vital Germany-Russia relationship. Nor should common sense be drowned out by the howls of the (cashed-up) cyber legions claiming that Russia tried to hack German democracy—it did not. In return for such a practical compromise on Crimea, Moscow could meet Berlin halfway by agreeing to reduce deployment of tactical nuclear weaponry (e.g. Iskander) in Eastern Europe or by readjusting other threatening military deployments. It’s time to look beyond Crimea and Ukraine and develop positive momentum behind a German “peace policy” that it is in full conformity with Germany’s starkly obvious historical responsibilities—a responsibility that Chancellor Willy Brandt fully understood when he first launched Germany’s original Ostpolitik to defuse Cold War tensions. Such a principled policy will not only benefit Germans, but all the peoples of Europe and the Middle East as well.