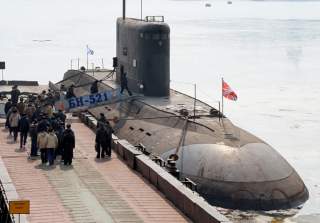 Much of that will go to the Russian Navy. Russia is beginning to rebuild her fleet, with an emphasis on submarines and the country’s sea-based nuclear deterrent. A new surface fleet centered around a new aircraft carrier is planned, possibly including multiple aircraft carriers. An effort to deploy a new amphibious force has stalled with the cancellation of a sale of two Mistral helicopter carriers.

The stakes are high. The Russian Navy is old and decrepit, and without it Russia will be unable to project power and influence beyond Eurasia. North and South America, most of the Pacific Ocean, Africa, the Indian Ocean, and much of the Middle East would be out of reach of Russian conventional forces

With that in mind, here’s five of Russia’s most lethal weapons of war.

In March, Russian Navy commander Admiral Viktor Chirkov announced that a new Russian aircraft carrier was under development. The carrier, which will not be operational sooner than 2030, will represent a leap in Russian expeditionary capability.

The new carrier is to weigh 100,000 tons — as much as a modern U.S. supercarrier — and carry up to 100 aircraft. A mockup made by the Krylov State Research Center features an angled flight deck, three aircraft elevators, a split, two structure bridge and ski jumps to assist takeoffs.

The air wing for the carrier appears to consist of a navalized version of the new PAK-FA 5th generation stealth fighter with folding wings, MiG-35 multi-role naval fighters, Kamov helicopters and an airborne early warning aircraft similar to the E-2D Hawkeye. Given advances in unmanned aerial vehicles, it seems likely UAVs will form part of any future Russian air wing.

Russia faces a number of challenges in building a new aircraft carrier. Russia’s shipbuilding industry is a shadow of what it was during the Cold War. It’s worth keeping in mind that when Russia wanted large amphibious assault ships, it had to purchase them from France.

Carriers are also expensive: USS Gerald R. Ford, for example, will cost $12.8 billion. It will also need aircraft, submarines, cruisers, destroyers, and replenishment ships to arm, protect, and support it. Then there are operating costs for a carrier battle group, which can exceed $1 billion for a six-month cruise.

Finally, if Russia were to go the super carrier route, it can’t build just one. The rule of thumb is that in order to have one carrier available at all times, a navy should have at least three. To keep one available in both the Atlantic and Pacific Oceans, Russia would need six.

Russia’s post-Cold War submarine program has seen turbulent times. Despite being a conservative design, Russia’s newest diesel-electric submarine class, Lada, was hung up for the better part of a decade with technical difficulties. The first Lada was commissioned in 2010 only to fail sea trials.

Until the kinks were ironed out, the decision was made to continue producing an updated version of the older Kilo-class. The result is the Type 636.3, also known as Varshavyanka. Russia is building six Type 636.3 submarines for the Black Sea Fleet, which protects the country’s interests in the Mediterranean and beyond.

The Kilo-class has primarily been an anti-submarine and anti-surface warfare submarine; with the addition of the land-attack version of the Klub missile it can now strike targets on the ground. Other upgrades include improvements in hull shaping, quietness, and range. According to the Russian press, the Type 636.3 class can achieve speeds of up to 20 knots underwater, and depths of 300 meters.

The Type 636.3 class has six torpedo tubes and carries 18 torpedoes and six missiles. The Russian Navy’s UGST heavyweight wake-homing torpedo is capable of delivering a 200 kilogram warhead to ranges of up to 40 kilometers at a speed of 50 knots and a depth of 500 meters. The Type 636.3 class also carries six Klub anti-ship or land attack missiles.

Four of the six submarines, Novorossiysk, Rostov-on-Don, Stary Oskol  and Krasnodar have been already been launched. Russia’s extensive experience with the Kilo-class design has led to some rapid shipbuilding schedules: Krasnodar was begun in February 2014 and launched just fourteen months later, in April 2015.

The last two submarines, Veliky Novgorod and Kolpino are to join the fleet by 2016.

The Lada-class submarine is a successor to the Kilo class of submarines. Smaller, quieter, and longer running underwater, the Ladas are designed to defend coastlines against ships and other submarines, perform intelligence, surveillance and reconnaissance missions, and act as a mother ship for special forces.

The lead ship of the class, Sankt Petersburg, began construction in 1997 and was completed in 2004. That was bad enough, but it took another six years of work to make the ship worthy of service in the Russian Navy. The class was canceled, but production restarted in 2014 on a second ship, Kronstadt. An unknown number of Ladas will be produced for the Russian Navy.

At roughly 2,800 tons submerged, the Lada class is smaller than the submarines it was set to replace. Improvements include an air independent propulsion system, a more efficient anechoic tile coating for sound suppression, higher capacity batteries for the running underwater, reduced crew, and towed transducer array.

The Ladas have the same number of torpedo tubes as the Kilo class, but carry fewer weapons, a mixture of 18 torpedoes and missiles. Like the Kilo class, the Ladas will also carry the UGST heavyweight wake-homing torpedo and Klub missile system.

In 2013 China placed an order for 4 Lada submarines reportedly worth $2 billion dollars, suggesting that despite a troubled development history, they are still better than anything China can build. The subs have also been offered to India.

Russia’s new Borei-class ballistic missile submarine is set to form the backbone of her nuclear deterrent at sea. The Borei class, which had been in development at the end of the Cold War, was delayed due to a lack of funding. The first submarine, Yuri Dolgoruky, was finally commissioned into the Russian Navy on January 10, 2013.

At 14,700 tons surfaced, the Borei class are submarines are slightly smaller than the gigantic Typhoon. The Borei class will consolidate Russia’s strategic nuclear deterrent in a single class of submarine, replacing the older Delta-III, Delta IV, and Typhoon subs currently in service

Three submarines, Yury Dolgorukiy, Alexander Nevsky, and Vladamir Monomakh are currently in service with another seven planned. A likely deployment scheme is five will serve with the Northern (Atlantic) Fleet and five with the Pacific Fleet.

The Borei class will carry 16 Bulava submarine launched ballistic missiles, each in turn with 6-10 warheads, for a total of 96 to 196 warheads per submarine. Missile Threat pegs the missile's range at up to 8,300 kilometers. This means submarines in the Barents Sea and Sea of Okhotsk—where the Russian Fleet hides its ballistic missile submarines—could reach any point in the continental United States.

Bulava has had a difficult development period with eight of its twenty three launches ending in failure. However, the last three tests of the missile —conducted between September and November 2014—were successful. In the latest test, a Bulava launched from the Alexander Nevsky in the Barents Sea reportedly hit its targets in the Kamchatka Peninsula.

Russia’s amphibious transport capability has suffered since the end of the Cold War. What was once a powerful force of 45 Ivan Rogov, Alligator and Ropucha landing ships has become… an aging force of aging Alligator and Ropucha-class landing ships. More than half of the ships, including all of the Ivan Rogovs, have been retired, and not a single new ship has been added to the fleet.

The new Ivan Gren class of landing ships will help reverse the decline. Six thousand tons each, the Gren class is dwarfed by modern U.S. amphibious ships. Rather than being “floating Swiss Army knives,” on the other hand, the Russian ships will have a very specific purpose: landing marines on hostile shores.

Each Gren will have the cargo capacity of 13 tanks or 36 armored personnel carriers, as well as up to 350 troops. The class will also feature a helicopter deck. Two Ivan Gren landing ships will be able to land an entire naval motorized infantry battalion, or a battalion task force consisting of a naval motorized infantry company reinforced with self-propelled artillery and company of tanks.