The Russian War on Terror 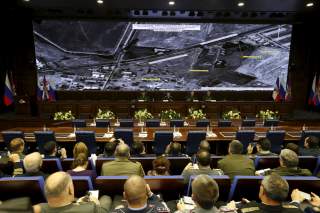 Which country ranks as the largest source of foreign fighters for the Islamic State’s “caliphate” in Syria and Iraq?

That dubious distinction doesn’t belong to a Middle Eastern state, despite the fact that countries such as Saudi Arabia have historically been major contributors of radicals to the Islamic State’s ranks. Nor is it a North African nation, even though Tunisia had previously served as the preeminent supplier of fighters for the Syrian front.

Rather, the most active contributor to the current contingent of jihadis supporting the Islamic State is none other than the Russian Federation. That is the finding of a new report from the Soufan Group, a leading U.S. counterterrorism consultancy. The study, entitled “Beyond the Caliphate: Foreign Fighters and the Threat of Returnees,” notes that—while the number of foreign fighters from places like Tunisia has declined appreciably over the past two years—those of Russian origin have not.

On the contrary, Russia’s contribution to the “caliphate” has actually increased over time. In all, the report details, 3,417 Russian nationals are believed to have joined the ranks of ISIS since the organization’s leader, Abu Bakr al-Baghdadi, announced the formal establishment of its state in mid-2014. That figure represents a forty percent increase over the 2,400 Russian nationals that were estimated to have joined the group as of 2015.

Those statistics are striking, because they run counter to the current trend of ISIS decline. Over the past year, the organization has faced major battlefield reversals and strategic setbacks at the hands of the U.S.-led global coalition. Coalition officials recently estimated that the group has now lost nearly 90 percent of the territory and some 6.5 million people previously under its control. And as it has, the overall number of foreign fighters traveling to the Middle East has slowed to a mere trickle.

Russia and its neighbors, however, remain fertile ground for Islamic militancy. Cumulatively, the countries of the “post-Soviet space” account for almost nine thousand foreign fighters—or nearly a quarter of the forty thousand radicals estimated to have joined the “caliphate” to date. That figure, the Soufan Group notes, is larger than the number of foreign fighters from Asia and Western Europe combined. But Russia itself is by far the biggest source of this flow.

The causes are manifold. Russia’s own Muslim minority is growing rapidly, thanks to more robust birth rates than the rest of the country (which is still struggling with deeply negative demography). It is also radicalizing, as extremist ideologies and groups find greater purchase in response to Vladimir Putin’s pervasive authoritarian rule. This, in turn, has led to a significant mobilization on the part of Russia’s Muslim underclass.

The Kremlin has done its best to control and direct this extremist flow. The country’s security services have quietly aided the exodus of Islamic radicals from the Russian Federation, while Putin’s ongoing military campaign in Syria has sought to target those jihadists and neutralize them before they return home. It is a strategy that has worked—at least so far. As the Soufan Group reports, only four hundred alumni of the Syrian jihad have made it back to Russia to date; far fewer than those who have returned to Tunisia (eight hundred) or Saudi Arabia (760).

But this isn’t a permanent solution. Sooner or later, the statistics suggest, Russia could face a major influx of returnees from the Syrian civil war.

That’s why there is now a vigorous public debate among Russian scholars and practitioners about how best to counteract the dangers posed by a reverse flow of radicals. The proposals range from more rigorous prison policing to the creation of “black lists” intended to aid the country's border guards in identifying and apprehending known militants trying to reenter the country.

What is missing so far, however, is a serious official strategy for combatting the problem. Having decided that the best defense is a good offense, Kremlin officials are now pursuing an expansive—and open-ended—version of their own “war on terror” abroad. But they have not yet put in place a comprehensive plan to protect the Russian homeland from the same threat. To the contrary, the various measures enacted to date by the Putin regime (ranging from the establishment of a 340,000-man “national guard” to the passage of draconian new legislation to track online content) have more to do with the Kremlin’s efforts to consolidate political power than with truly confronting terrorism.

That may turn out to be a costly mistake. Russia has already begun to see an alarming uptick in both terrorist attacks and extremist threats—a trend-line that could be a portent of much worse to come, as more and more Russian jihadists make their way home. To prepare, the Kremlin needs a real plan to mitigate the returnee threat. Moreover, given the quickening pace of the Islamic State’s decline in the Middle East, it is going to need such a strategy very soon.

Image: Defence ministry officials sit under screens with satellite images on display during a briefing in Moscow, Russia, December 2, 2015. Russia's defence ministry said on Wednesday it had proof that Turkish President Tayyip Erdogan and his family were benefiting from the illegal smuggling of oil from Islamic State-held territory in Syria and Iraq. REUTERS/Sergei Karpukhin