The Saudis’ Unconscionable War in Yemen 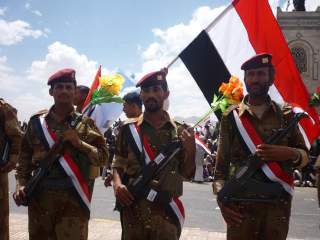 A nation with imperial ambitions is sowing chaos in the Middle East. Its tendrils have extended to another country’s civil war where, thanks to its terrorist-allied proxies on the ground, it could very well consume another regional capital. Its bombs seem to target civilians indiscriminately and have created a humanitarian crisis that the world community is struggling to alleviate.

This is usually when an interlude is scheduled so neoconservatives can make yelping noises about Iran. But in this case, the culprits aren’t Tehran and Bashar al Assad. The meddling nation is our good friend Saudi Arabia and the civil war in question is in Yemen.

There, the Saudis have waged a scorched-earth campaign against Houthi rebels, who seized the Yemeni capital of Sanaa last year and have pushed south towards the port city of Aden. Yemen is the poorest country in the Middle East, and riven along sectarian and geographic lines. Here, the lethal Al Qaeda in the Arabian Peninsula (AQAP) lurks in the desert and American drones inspire fear from above. Now the Saudi intervention, backed by the Obama administration, has added a new dimension to Yemen’s suffering.

The Saudis have been blockading Yemen since March to repel ships seeking to arm the Houthis. They’ve pledged $274 million in aid for the country they’re bombing, but have demanded that Houthi-controlled areas be excluded and tossed up bureaucratic roadblocks that have made the effective distribution of supplies impossible.

The result is that Yemen has been isolated from the world and left to die. More than 80 percent of its population—21.1 million people—is in need of aid. Thirteen million are at risk from starvation and 9.4 million are imperiled by thirst. Water is in such scarcity that Yemenis have resorted to bathing with damp cloths and shaving their heads so they don’t have to wash their hair. Malaria has become rampant thanks to desperate quaffs from unsanitary water sources.

The chief of Doctors Without Borders recently warned that the Saudi blockade has killed as many people as the war itself. The Saudis also stand accused of war crimes by Human Rights Watch over an airstrike against an evidently harmless apartment complex in the city of Mokha that killed sixty-five civilians, including ten children. An estimated 1,900 civilians have perished in just four months of fighting.

Throughout all this, there’s one region of Yemen that’s been left almost entirely unmolested by the Saudis: Hadramawt Governorate, in the eastern hinterlands. There, Al Qaeda in the Arabian Peninsula has set up shop with relatively little resistance, seizing the capital city of Al Mukalla and the local airport. It’s used Hadramawt as a base of operations from which to plan attacks on the Houthis and, presumably, given AQAP’s extensive terrorism résumé, the United States.

“The bombing has only achieved one thing,” one Yemeni told Vanessa Beeley, “and that is to further strengthen these extremist groups in Yemen.” Yet the Saudis seem remarkably untroubled by the flourishing Al Qaeda presence in their backyard—to the point that AQAP extremists have fought alongside Saudi-backed militants and the group’s black flag has been spotted on pickup trucks motoring around Aden. It’s eerily similar to Syria, where the Saudis have worked openly with the Al Qaeda–linked Nusra Front to challenge Assad.

As in Syria, Saudi Arabia’s impetus in Yemen is to counter Iran, which it believes is providing the Houthis with weapons and training. Tehran’s level of intimacy with the Shia Houthis remains murky, but what is known is that aversion to Iran has burrowed so deeply into the Saudi psyche as to border on paranoia. Internal documents released by Wikileaks reveal a Kingdom determined to squash even the most ethereal hint of Iranian expansion, even going so far as to block Persian carpets from being imported by mosques in Mecca and Medina. Scratch the surface and the geopolitical games quickly become sectarian. One Saudi proposal involved a program to stymie the spread of Shia Islam in China.

The Saudis view Yemen as the latest battleground in their Sunni-Shia cold war with Iran. And America is onboard, addled by nightmares of a revived Persian Empire. Why has the Saudi campaign in Yemen not elicited the same condemnation as Bashar al-Assad’s killing of his people? One of the reasons is that Assad is tied to Iran and the Saudis are countering Iran. This bias, hardwired into American foreign policy, has led us to support a war that’s chopping apart civilians and empowering Al Qaeda. Writing for this website, I’m obligated to note: this is not in our national interest.

None of this is to shrug at Iranian ambitions or to exonerate the Houthis, who overthrew Yemen’s elected president. But there’s a grand irony here that can’t be ignored. The Houthis militarized in 2004 in part because they came to believe that Saudi Wahhabis, who had come south ten years earlier to fight in Yemen’s previous civil war, were integrated too deeply into society while the impoverished Shia north was neglected. Today we’re trying to beat them back—with more Saudi meddling that’s inflicting more poverty.

This will accomplish nothing except the torment of Yemen and the enfeeblement of the Saudi monarchy. As Bruce Riedel reports, “No one wants to say openly that Riyadh is in a quagmire, but Oman’s decision to opt out of the war is increasingly seen as a smart decision.” The Houthis are proving scrappier than the Saudis anticipated. So the pointless carnage in Yemen will drag on, but how much longer can America stomach it?