The Scandalous Love Affair That Started World War I 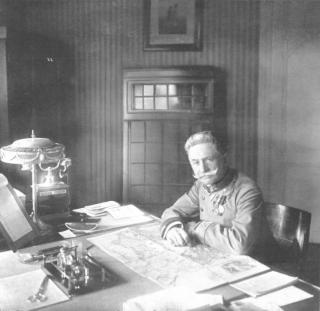 This epistle from 1908 was first published in a book in 1935 entitled, My Life with Conrad von Hoetzendorf. The book caused a major scandal in Austria and led to the immediate confiscation of the work—possession of which in Austria was punishable by three months in prison or a heavy fine. The letters found within the book painted the picture of a manic-obsessed, unstable, impulsive, hyperemotional, and self-pitying Conrad clearly unfit for the strains of prolonged modern war.

Collated letters from the earlier period of courtship which Conrad never dispatched and which he called “Diary of my Sufferings” were especially dramatic:

If you read these lines, they will give you testimony of my unspeakable, passionate, desperate, all consuming love! Will I be able to endure this self-agony? What would I not endure for you! I love you, like one loves a woman, whom one desires to be one’s wife, and to whom one dedicates his entire life. Only now, after I found you, do I have the desire, to do great things, and to be worthy of you!

Like most soldiers of his age, he thought that the only means of achieving greatness as a general was through war. In another letter to Virginia he states:

You know that as well as I do that I always ridiculed the fact that a general may be judged on his accomplishments during peacetime. No one amongst us has been tried by war. If a war would have confirmed that I, as a leader, was at the right place, I would have been very happy …

In Conrad’s mind, all of this inexplicably tied the good fortunes of his relationship with Virginia to the survival of the empire and the victory of its army.

Conrad consistently pushed for war in his Denkschriften (annual aide-memoirs) on the military strategic situation of the empire while he was Chief of Staff. In 1909, during yet another crisis in the Balkans, Conrad told Virginia: “It is a crime, that nothing is happening! The war with Serbia would have saved the monarchy, in a few years we will pay for this failure.” Conrad’s call for war clashed with the foreign policy of Emperor Franz-Josef and led to many confrontations between the two. The Emperor declared, “Austria has never started a war!” His general replied, “Unfortunately, your majesty!”.

Conrad was nevertheless gloomy about the prospects of success for Austrian arms. A few hours after the assassination of Archduke Franz-Ferdinand on June 28, 1914, he wrote a dispirited letter to Virginia: “This will be a forlorn fight, it nevertheless will have to be fought, such an old monarchy and such a glorious army cannot go down ingloriously.” The Emperor Franz-Josef echoed his sentiments: “If we go down, at least we shall go down with decency!” Yet, both the Emperor and he pushed for military confrontation. A month later on July 28, Austria declared war on Serbia. Russia started full mobilization on July 30, setting into motion what Henry Kissinger called the “doomsday machine,” which eventually plunged all of Europe into conflict. In secret, Hoetzendorf’s only hope was that Russia would collapse faster than Austria-Hungary. He had no other strategy after the initial Austrian offensives on the Eastern Front had failed. The German high command would eventually refer to the alliance with Austria-Hungary as being “shackled to a corpse.” The continuous separation from Virginia amplified Conrad’s fatalism.

Amidst the war at the beginning of 1915, Virginia’s husband finally divorced her, after having tolerated his wife’s affair with the prominent officer for eight years. Once Conrad found out—he happened to be in Vienna at that time reporting on recent developments on the frontline to the Crown Council—he immediately confronted a still shocked Virginia, who was worried about the fate of her children: “Thank God! I had to wait for this for eight years! Now you will not say ‘No’? Now you will consent?” Gina nodded and Conrad exclaimed joyfully: “Finally my bride!” However, in order for Gina to marry Conrad she had to become a Hungarian citizen and convert to Protestantism due to the strict Catholicism of the Habsburg Emperor, which rendered divorce and remarriage among Catholics impossible. While he finally had conquered his most important ‘objective’, the real war gradually took a turn for the worse for the royal and imperial forces. He was not to return to Virginia as a conquering hero.

In October 1918, Conrad and Virginia went to Trieste, the most important port city of the crumbling empire and the place where they first met. Conrad, who had been relieved of his command as Chief of Staff, was later also relieved of his post as an army group commander on the Italian front line after Austria-Hungary’s last failed offensive on the Piave River. The empire would only exist for a few more days, and Conrad was in a state of depression (another of his sons had died in January, 1918).

Once he found out about the young Emperor Karl’s idea of providing the nations of the empire more autonomy, he told the last Austrian governor of Trieste: “Yes, yes, Excellence, now the cake has been divided up, now it is over!” Russia did collapse, as he had anticipated, but eventually, so did the Austro-Hungarian Empire. The state for which he had fought for all his life was finally dissolved in November 1918. Yet the old boy’s fear of military defeat leading to his abandonment by Virginia proved unwarranted. She remained by his side until he died in 1925.