The Scenario That Destroys the Fed’s Credibility 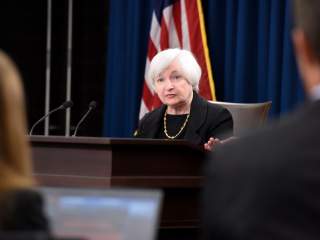 On one side of the debate are those who say the Fed is tightening at the wrong time. And, honestly, this is nearly guaranteed to be true. 'Perfect timing' and 'monetary policy' are never used in the same sentence. There is always a reason to wait, or move ahead, or take a pause. The question that should be asked about Fed policy is not whether or not the timing was optimal (it never is), but whether it did more good than harm.

To argue the “good” side, one must make the somewhat awkward case that a rate hike helps avoid a hypothetical future “harm” i.e.: “If the Fed had not hiked, it would have been bad.” The Fed may already be acknowledging this difficulty through its emphasis on a gradual pace of normalization, which betrays that its motivations are not the traditional slowing of the economy and reduction of inflationary pressures. Inflation is certainly not a threat to the U.S. economy. Employment may be reaching “full,” but the level of employment this constitutes is debatable. Rather, the Fed is—at least for now—trying to find its way back to “normal.” Normal is certainly up for debate, but the Fed has no want to stifle the economic recovery.

Had the Fed not raised rates, its monetary policy options (outside of Quantitative Easing [QE]) would have been severely limited in the event that some external shock rocked the U.S. economy into a recession. The risk of asset price overshoots (bubbles) would continue to increase, and emerging markets, already on edge from the global commodity rout, would continue to be whipsawed by Fed policy. But these sound like a stretch, and the argument for why the Fed should do it—to marginally normalize policy in the case of a shock—seem esoteric.

Demonizing the increase does not take the same type of argument. It is much simpler, and the risks are more concrete.

Very simply, the Fed cannot afford to have the economy fall into a recession too soon after the beginning its “normalization.” One fear has been that there will be increased encounters with zero interest-rate policy (ZIRP). If the Fed acts too hastily and slows the economy (or the U.S. dollar strengthens too much), the Fed would find itself not only returning to ZIRP, but also likely some form of QE. It would then have to delay further moves until the economy had healed—and the U.S. economy would find itself in a sort of Groundhog Day scenario. Moving too fast will bring consequences that the Fed has probably thought about, but may not be able to prepare for.

In any event, it will take the Fed a long-time to move rates much higher without damaging the U.S. economy. Another reason is that potential GDP in the United States has substantially declined, causing the rate of interest at which the Fed is neither loose nor tight to fall. Simply, there is less operating room for the Fed than in previous cycles, and the Fed has to be more sensitive.

Torpedoing the economy would probably be the anti-Volcker moment for the Fed—its credibility would be thoroughly and utterly destroyed. In the 1980’s Chairman Paul Volcker single-handedly caused a recession, broke inflation and gained the Fed an incredible amount of trust. It may well be lost in a scenario where the Fed is quickly forced to return to QE. And, worse, without credibility the Fed may not be able to spark the type of outcome it needs even with large amounts of stimulus. This would be a tragic outcome.

Moving toward normalization is probably a good idea. But the Fed is by no means out of the woods. Relapsing to ZIRP and QE are significant risks that may warrant acknowledgement from the Fed. It is time to understand that normality—whatever it is—is still a long way off.